The Quashowan are an ancient and mysterious race once mentioned by the mystical Atlantica. As bio-mechanical creatures, they have enchanced abilities in strength and stamina, calculating and cold the Quashowan wish to establish themselves once more within the Quadrants, at the expense of other species.

The Quashowan are a bio-mechanical species, strong and enduring at heart. What lies beneath their armor is a mystery. It is known they are dependent on wearing helmets to provide them with oxygen. It is not known if the Quashowan need to drink water or have the need to eat and sleep.

The Quashowan are programmed with certain societal skills such as language upon their creation, their suites provide them with all the means to survive. The suites or exo-armors are adeptable, capable or making self repairs, adepting shields and more.

The Quashowan are not from the Quadrant Galaxies, believed to be hailing from elsewhere by the Aininyë of Aecor. The Atlantica were unsure whether the Quashowan came from another dimension or universe, though they did found records that their arrival means nothing good. Upon the Atlantica their dissapearance around 15.000 BQF, all knowledge about the Quashowan fell away in history. When Rambo Nation and the Cogsangui discovered the Atlantica bastion Aecor in the ninth month of 06 AQF during the Hunt for the Zevian Skull records were once again found about the excistance about the bio-mechanicals but are vague and not all are translated.

The Chavelli seem to have knowledge about them as well, but refuse to comment on the matter. The Quashowan themselves refer to an event that occurred around 4000 BQF that resulted in their imprisonment.

During the first month of 07 AQF the USS Enterprise-A under command of captain James Rambo witnessed the sudden appearance of a green nebula during the Voyages of Enterprise. Unknown to them, a breach in the protective barriers around the Quadrants was fabricated and allowed a single Quashowan Dreadnought to enter the Quadrants. While under their shadow cloak, the dreadnought identified the Enterprise and began dowloading all available and public information from the Quadrantia HoloNet before they would start conquering the Quadrants.

The Quashowan were attracted to the energy waves submitted from the Atlantica planet Aecor. During the first month of 07 AQF they encountered a patrolling Hecatoncheir-Class in the system, the Quashowan felt threatened by the massive ship and engaged the Rambo Nation vessel. With a single beam of pure energy the massive ship was destroyed in an instant as the beam ripped the ship apart.

In response, a joined fleet of Rambo Nation and Chavelli ship, the latter using Cognatus Remnant vessels and the massive Angforst approached the dreadnought. Under command of vice-admiral Ramtainus Ramveral a diplomatic solution was tried. The Quashowan, ignorant to such behavior opened fire at a nearby Preator-class star destroyer, destroying it in the process. While the Angforst began powering up her main weapon, the dreadnough fired from all of its "tentacles" and hit the Angforst dead-on, creating a massive anomaly that ripped the massive station apart. It then took care of the CSS-battlecruisers and the Dreadnought-Classes. It left the scene, leaving a large field of debris of decaying bodies, surviving persons and the wreck of the once proud Angforst. 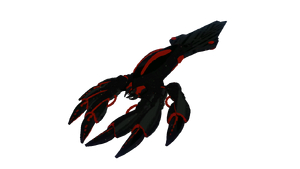 The main vessel of the Quashowan are known as their dreadnoughts, red and black in coloration that are also reffered as "Shadows" by those that encounter them. These large insect like vessels spread fear and terror into the hearts of their enemies. From each "claw", a massive and powerful purple laser can be fired, capable of tearing ships apart with pin point precision. The center of the ship contains the bridge and holding stations for the Quashowan drones. The "mouth" of the ship can fire when charged a massive singular beam of pure energy, capable of destroying cities and continents in an instance.

The Dreadnoughts come in differant sizes and all are lethal.

“All shall fall before the Quashowan!”