The Quadrantia Zazane are an off-spring of the Zazane of the Andromeda Galaxy though are different in appearance and coloration due to the magical energies inhabiting the Quadrant Galaxies. They became members of Rambo Nation and are known to be seclusive, on their own and rarely venturing off their adopted home world, Parjurba

The Quadrantia Zazane resemble their distant ancestors greatly, they walk on two legs and are around 2 meters in length. The greatest difference in appearance with their ancestors and other Zazane species is their lack of wings, the Quadrantia Zazane do not possess the ability of flight! Their difference in appearance is due to the magical energies inhabiting the Quadrant Galaxies which changed their appearance. They wear decorated dark red spiked armor, have two large horns on their heads and are dark red/blue in skin coloration.

They are experts in using katana’s, able to inflict deadly injuries upon those who dare to challenge them in combat.

The Quadrantia Zazane origins date back to around the outbreak of the Second Galactic War in 0 BQF, when Zazane explorers and refugees arrived in the Quadrant Galaxies. With the blessings of the Rambo Government they were allowed to settle within their borders, the Zazane chose the abandoned Parjurba as their adopted new home world. Over time their constructed monastery became well known among Rambo Nation as a place where one could study the arts of the warrior, though the Q-Zazane are rather on their own and rarely anyone visits their planet.

In 04 AQF the Q-Zazane signed the Treaty of Fornaeria and became full members of Rambo Nation.

The following planets are mostly inhabited by the Quadrantia Zazane. 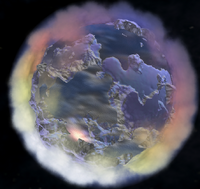