former enemies of the Noble Alliance

Honor by all means!

The Heer Stekeveel are bi-pedal sentient reptillian humanoid species native to Quadrant 82. One of the older space-faring species within the Quadrant 82- they formed a once grand Empire before it crumbled and moved against it allies.

The remaining of their species were either enslaved by the Diva-Bettie or scattered to the Unclaimed Territories of Quadrant 82, where they remain hidden and fractured in various clans without a true leader.

The Quadrantia Heer Stekeveel are cold-blodded reptilian creatures with a green, leathery skin and an average height between 1.8 and 3 meters. The Heer Stekeveel tend to be stronger than most Ramboidae and humanoids and their leatherly skin protects them against weaker phasers and bullets. 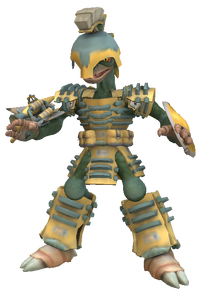 Their mouth boast an arry of sharp, carnivorous teeth, with saliva that contain bacterias that infect the biting wounds of their prey or enemies. Their hands have vicious claws, their feet have two strong nails they use for running, jumping and climbing walls. The Quadrantia Heer Stekeveel are known to prefer warm temperatures.

The Q-Heer Stekeveel militairy were known to wear golden/green armor, with shields at one arm and blasters placed on the other arm. They were often a sign of fear as the militairy is ruthless and shows no mercy to it's enemies. The armor is made by special metals and provides a certain protection against bullets, bolts and even small explosions (-see image for appearance).

As the Quadrantia Heer Stekeveel reached space around 700 BQF- they soon made first contact with the Insectors who aided them in mapping their territories and finding suitable planets for colonisation. Within a few years the Empire rose to become a promising, proud and influential empire within Quadrant 82. Yet the Heer Stekeveel with their warrior traits were often considered an agressive and hostile empire, wich soon resulted in conflicts with the neighbouring Trogg.

Around 442 BQF the Q-Heer Stekeveel encountered Rambo Nation, who was at that time under rule of Emperor Ramulindalë- who followed up his late grandfather. The Rambo at that time were involved in a war with the Trogg, seeing a chance to ally a great power and to extract revenge upon the Trogg- the Heer Stekeveel allied the Rambo and joined them in the war. After the Trogg were defeated after 2 wars in 430 BQF, the Heer Stekeveel lived in peace with Rambo Nation until 280 BQF when both the Empire and the Nation attacked the Mozel Empire.

Even upon Rambo Nation becoming a protectrate in 05 AQF/01 NE of the Galactic Empire of Cyrannus, the Heer Stekeveel slavery was kept from the public by the Diva-Bettie.

The various Q-Heer Stekeveel who managed to flee the wrath of the Rambo fled to the unclaimed territories. There they tried to re-build their once great Empire but internal strive prevented that. As such the various Heer Stekeveel settled themselves inside astroid fields, planets or moons and formed their own clans. The various clans are often in conflict with eachother, but when facing a common enemy they would band together as written in one of their new laws. As such the various clans are loosely unified under the Hegemony, yet the central goverment has little influance over the clans and is often undermined when passing laws. Yet the central Hegemony still uses the militairy- as they appeared even in times of the Empire as their enforcers.

With their setteling in the unclaimed territories, the Quadrantia Heer Stekeveel soon came into contact with other species who inhabit the Unclaimed Territories. They became wary of the Lizardians who they seem to avoid, made trade contacts with the Sepherians and Sanderhal and plan to conquer other planets when the time is right. One of the warlords, Stekius Gaivel saw an oppertunity to launch a new campaign against the Rambo when he provided bombing materials to Syria, the daughter of Geldrim of Yudumarth. He anticipated that the Rambo would trace the bomb materials to Yudumarth and would start an occupation of the planet. After fleet captain Trabl managed to conquer Yahvast and bring the Yudimaran goverment to it's knees, he travelled to Yudumarth to pledge his "loyalty" to Syria and promised to aid her in her campaign against the Rambo. Stekius instead only used her as a way to experiment with the sample of the Purity Virus so he could obtain for his own, and force Rambo Nation to give it's temporal weapon to the Heer Stekeveel, a perfect move to start a new war against the Rambo.

It eventually resulted in a joined occupation by France and the Drodo of Heer Stekeveel space, resulting in the puppet state QHeer Stekeveel Confederation.

How this sudden change in political power is reacted to, remains to be seen. Unknown to most, a few tribes in the east of the Quadrant also learned of their brethren and sisters fall, how they decide to act also remains unknown. Upon Stekius Gaivel released, the Confederation became involved in the Second Heer Stekeveel War, drawing attention from Rambo Nation who were far from pleased that colonial presence were waging another conflict in their own backyard, the events eventually resulted in the outbreak of the Second Heer Stekeveel War.

Meanwhile in the eastern colonies, something was stirring up as well and many joined the Hutter Kingdom under the Quadrantia Prince Kael'Thalas Bloodwing. The Quadrantia Heer Stekeveel became the backbone of the ground forces of the Hutter Kingdom, using their hatred for the Rambo the Bloodwing Prince used their formidable cunning and strenght against his foes! 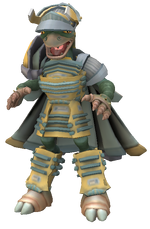 General Sterveral was the supreme general over the Quadrantia Heer Stekeveel Empire' forces when they engaged the Rambo in 278 BQF. Under his command the Q-Heer Stekeveel forces managed to attack and hurt the Rambo forces and many oppertunities. When the Q-Heer Stekeveel goverment signed a treaty of peace in 275 BQF, he openly opposed it and urged his goverment to continue hostilities as the honor of Empire demanded it.

Finally in 271 BQF conflict one again began, and due to his tactics the Empire managed to bombard the Rambo Capital. Yet this very act proved to be the downfall of the general as the Rambo soon unleashed their wrath and in 263 BQF the Rambo conquered the Q-Heer Stekeveel. Defeated and ashamed, the general was taken captive by Emperor Ramânawenûz himself and was send to the Ramghatulkiaga Orbital Prison where he still remains.

The Navy of the Quadrantia Heer Stekeveel is not diverse, instead they use old and trusted designs they continue to upgrade to modern standards. They use green/red colored ships- hinting a once possible politician relation to the Rambulans.

The Light Cruisers of the Quadrantia Heer Stekeveel are the backbone of their navy and the most common and easily constructed vessels they have. Designed during the height of their empire, they became an an old design but was constantly updated to modern standards due to her durability.

The Light Cruiser have an average length of 205 meters. Equipped with two heavy cannons in front, they are a dreaded enemy when you come in their firing lines. In addition to the front cannons, the ships are also equipped with moderate shields and an arsenal of torpedoes.

Equipped with various engines it can breach space and enter an artificial transwarp tunnel, equipped with moderate shields and various cannons and weapons, they are formidable in combat and can stand their ground. The Quadrantia Heer Stekeveel- with this new class are now ready to engage the Rambo in a third galactic war!

The class has an average length of 685 meters.

“They deserve our honor!”

“They do not seem to risk the wrath of our honor”

“A repulsive species who have been dealt with”