Plumps are small pear shaped creatures of the Piria family. They are shaped liked pears, and can photosythesise aswell as devour organic matter, mainly other fruits. They have a gentle nature, with little defense capibilaties of any kind, and spend most of their life asleep, as movement in sunlight can cause them to rot. It is believed that they are the descendants of The Ploid, as they have similar DNA. Fortunatley, they are prey to few creatures, as carnivores don't like their sweet, fruity taste. Over time, they have evolved into many different types of Plump. For the full diversity of Plumpoidia, see below. 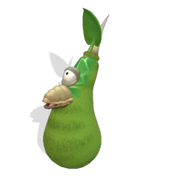 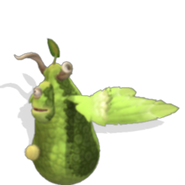 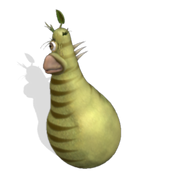 The Ploid were a great, interglactic species that were attacked, possibly by the Grox for becoming too wise, and were almost completely destroyed, apart from one decomissioned scout ship, resting on another star system. The ship was carrying capsules of Ploid DNA, and, in a last attempt to save the species, scattered them accross a planet, hoping that an animal would be infected by the DNA, and would lay eggs very similar to Ploids, with enough brain-power to re-reach space stage. Unfortanately, the capsule landed on a pear-like plant, and the DNA spread and mixe with it, and thus the Plumps evolved. Recent research has found what is believd to be Ploid fossils, and using evidence from what is belived to be the remanants of a Ploid ship, we have digitally recreated the Space armour. Although you can't see, the Ploid had three eyes.