“Our people are devoted to maintaining the new found order in our galaxy.”

The Paladian are a race of reptilian beings native to the Borealis Galaxy. The Paladian are known across the galaxy as being strong warriors who constantly strive to preserve order within their space and are considered to possess one of the finest and most experienced military forces in their region of Borealis, though they are also highly regarded for their respect for the rule of law and their commitment to order. Native to the planet Pax-Paladi in the very fringes of the Arm of Knowledge, the Paladian's strong empire, the Civitas, was damaged severely during the various conflicts that ravaged the galaxy, thus forcing them to join the Polar Crystal Alliance when it was re-created.

After several years as members of the Alliance, the Civitas became a widely popular force for the maintenance of law and order within the Borealis Galaxy, ultimately leading to them being granted a position amongst the leaders of the Polar Crystal Alliance, with Councillor Augustex taking his place in the halls of power on Hyperborea amongst figures such as Kithworto and Valzaria while other Paladian figures such as Olcinius became more heavily involved in important events shaping both the Alliance and its allies.

Native to the temperate planet of Pax-Paladi in the Arm of Knowledge of the Borealis Galaxy, the Paladian emerged from the cradle of their world in the aftermath of a vast global war that left much of their civilisation in ruins. In the aftermath, a charismatic emperor known as Mereth II declared the unification of Pax-Paladi under a single civilisation, known simply as the "Civitas", crushing those who would seek to keep their world under the eternal shadow of perpetual war. Within fifty years, the Paladians expanded throughout their solar system, constructing a vast military fleet and training a massive army under the suspicion that extraterrestrial contact was inevitable.

However, while stuck in their own system without any Faster than Light capabilities, the Paladians remained isolated for a further century until the discovery of an ancient alien artifact in the fringes of their solar system, which propelled the Paladian onto the galactic stage. Within the next five hundred years, the Paladians would meet ever more civilisations and would use the technology from this ancient relic to travel further throughout the galaxy. However, with the galaxy still reeling from the devastation of the First Borealis Galactic War, the Paladians generally remained close to their home sector and thus escaped from the wrath of civilisations such as the Borealis Grox Empire.

This age of relative peace and prosperity in the Civitas was brought to a swift and devastating end with the outbreak of the Second Borealis Galactic War. Though contact with the official allies against the aggressors in the war was scarce, the Paladians fought bravely against such threats as the Borealis Consortium Network, though it was ultimately the campaign of the sinister Regnatus that caused untold damage to the Paladian's civilisation, leaving billions in his wake. The Paladians also faced the Cognatus Empire in combat though ultimately the similarities between the martial cultures of Paladian and Cogsangui brought the conflict between the two civilisations to an amicable end. However, near the end of the raging Galactic War, the Paladians joined the newly rebirthed Polar Crystal Alliance, aiding their new allies against Regnatus and the Consortium.

In the aftermath of the war, the Paladians enjoyed increased prosperity thanks to their membership in the Polar Crystal Alliance. As the Ice Age began throughout Borealis, the Paladians began to become increasingly common in the military of the Alliance as well as the diplomatic corps. With the Paladian supplying many new advanced starships to serve the Alliance, the current leader, Emperor Nedes XVI, has been a vocal proponent of the Paladian gaining a seat on the Crystal Council on Hyperborea, the galactic capital.

A reptilian race with many avian features, the Paladians are a fearsome sight to many who lay eyes on them. However, beneath the scaly exterior of an average Paladian lies a cultured and educated being devoted to the continuation of Borealis' new found order. The Paladians possess talon-like claws on both hands and two-figured digits on each foot as well as small black eyes, a pair of mandibles and a beak-like mouth, vestiges of their history on Pox-Paladi as apex-predators. A large brain in their skull also provides the Paladian with a highly advanced level of intelligence that is the envy of many species throughout the cosmos.

The Paladian are a highly intelligent species that generally value discipline and honour as well as the preservation of order and a high level of education. On the opposite end of the spectrum, Paladian society is also highly martial with all citizens in their society being expected to have a level of service with the advanced military of the Civitas and more recently, the Polar Crystal Alliance. This has given the Paladian a reputation for being among the most capable warriors in Borealis, a reputation that few Paladian shy away from. They are also considered a cosmopolitan species, though as with every species, many within their race can also be quite bigoted. 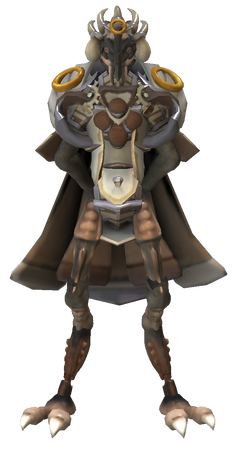 “We must improve our standing in the greater galaxy.”

Emperor Nedes XVI is the sixteenth emperor of the Civitas, the space-faring civilisation of the Paladian people. Born in the Terran year 2526 CE, Nedes XVI kept his royal heritage a secret and served as a helmsman on board a destroyer-class Paladian cruiser, fighting in over twelve engagements by the time his father died. With the emperor of the Civitas dead, Nedes was recalled to Pax-Paladi for his coronation and has ruled with a fair hand ever since. A strong believer in the need for galaxy-wide government to maintain order, Nedes led his people through the horrors of the Second Borealis Galactic War in the hopes of propelling his species to galactic politics. With the creation of the Polar Crystal Alliance, Nedes XVI offered the Alliance use of a large portion of his military and naval forces in the hopes that a Paladian councilor could eventually earn a seat on the Crystal Council. These liberal policies have received a mixed reception back in Paladian space, but few can argue that Nedes XVI has anything other than the best interests of the galaxy at mind. 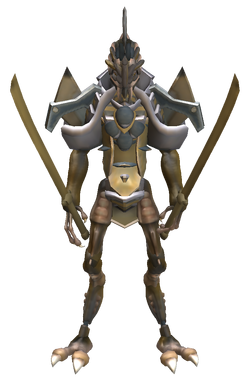 “War is art and I'm known as quite the artist.”

Legate Olcinius is a highly decorated combat veteran who has served the Civitas in countless engagements across the galaxy. Born in 2696 CE on the Paladian homeworld, like most younglings of his kind he was indoctrinated into the military eventually becoming one of the military academy's most successful recruits. By the time the Second Borealis Galactic War raged, Olcinius led the Civitas Fleet together with the allies against such threats as the Borealis Grox Empire. During such an engagement, Olcinius was attacked by a Grox drone and was nearly assimilated before being rescued by his crewmembers, including his husband. Though he survived, his right eye was replaced with a Grox implant, though Olcinius decided to keep the implant to remind him never to let his guard down in the heat of battle. After the war, Olcinius gained command of the mighty dreadnought, "Warlord", becoming one of the highest ranked officers in the military of the Paladian. Though he distrusts many of the species in the Alliance, Olcinius is willing to work with them to maintain the peace and order that Borealis finds itself in. 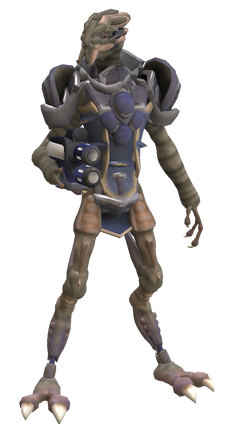 “I wouldn't bother trying to use your blade, Cogsangui. You'd be sleeping with the proverbial fishes before you knew it.”

Tironus Manition, nicknamed Tyron, is a male Paladian mercenary and smuggler operating in the Cyrandia Cluster. A long time associate of fellow smuggler Corva, the two became the Cyrannus Galaxy's most infamous smugglers during the Dark Times, mainly operating out of the vast Underworld beneath the Imperial Capital Orbispira. However, during the year 03 NE both Tironus Manition and Corva joined the crew of the Falcon under Claire Rambo, joining her in her voyages and missions across the First Gigaquadrant.

Augustex is a male Paladian diplomat representing his people in the Polar Crystal Alliance as an influential diplomat. A powerful speaker and a popular diplomat within the Alliance, Augustex often calls for situations to be settled by talking, though he is just as likely to promote a violent end to enemies of the Alliance if he believes that talking will accomplish nothing. Like most of his people, Augustex is highly educated and possesses a strong code of personal honour, which entails a deep hatred for crime and corruption, making him a common target to potential assassins that would prefer for his voice to be silenced.

Controlling a large and well-equipped navy, the Paladian's Civitas ruthlessly maintains peace and order throughout its controlled space. Though Paladian warriors are famous for their skill in hand-to-hand combat, the true pride of this martial people is in their space forces, which are split into five battle fleets that either patrol Paladian space or serve as peace-keeping units for the Polar Crystal Alliance. Paladian ships are divided into three categories, starfighters, frigates and dreadnoughts with the latter being the most notable due to their service in the Second Borealis Galactic War.

The pride of the Paladian people, the Classis-class Dreadnought has served the Paladian people for many decades, its versatile design allowing it to be constantly updated to modern specifications. Of the forty dreadnoughts that fought in the Second Borealis Galactic War, the Warlord saw the most action and was awarded to Legate Olcinius when the lengthy conflict drew to a fiery close. Measuring 1,400 metres long and equipped with advanced disruptor and anti-proton weaponry, the Dreadnought is used for border patrol, peace-keeping and large scale engagements, serving both the Civitas and the Polar Crystal Alliance.

“We have heard interesting things.”

“I can admire their commitment to order.”

“Bah. These birdbrains are a nuisance. They can take their ideals and shove them!... Just don't tell them I said that.”