The Ottzelloan Grox are a former colony of the Grox Empire, but are presently an important member of Union Republic of Ottzello, residing in the Ottzello Sector's centre. They are also behind the Ottzelloan Marinox, and are led by Commander-King Thylaxiz. Very closely affiliated with the Tralkikianoe and the Kralgon the Ottzelloan Grox serve as war scientists and commanders.

While some Grox joined the late Borealis Grox Empire, no more reside in it since reformation as the Kormacvar Legacy.

The Ottzelloan Grox were once bitter enemies of all. Once part of the feared universal Grox Empire, they were an incredibly powerful super-power in the dying galaxy, especially after the First Ottzello Galactic War.

After the Second Ottzello Galactic War, they were cut off from outside Ottzello when the Kralgon Invasion Force took over. As they inhabited the core, they were eventually surrounded by the Kralgon, and due to the Kralgon's Dark Chronoscopic technology interference, they couldn't contact the Grox Empire either.

In the Third Ottzello Galactic War, the Grox considered themselves a mere colony, until a new empire- the United Nations of Ottzello, helped them claim revenge of the Kralgon as well as helping them tolerate others. As the Grox became more humane, sociable and had less narrow views of others, they were no longer a thing like the Grox they once were. The Grox, rather than use their own spaceships, hugely improved UNO's, making UNO's fleet greater. Their intelligence and technology boosted the alliance to new levels, and so the Grox are a valuable member, although no one predicted it.

The Grox became a valuable member of the Unified Nation of Ottzello, and were no longer xenophobic, thanks largely to The System. Ironically, this has made them the second most friendly race in Ottzello, behind the Galot, as the rest of UNO had been made aggressive due to their experiences.

UNO were later reformed as the Union Republic of Ottzello.

The Ottzelloan Grox' physiology is largely the same as the ordinary Grox, with the exception of their Chronoscopic and Dark Chronoscopic. Both make them stronger and tougher than the original Grox. They also contain URO's nanomachines in them, making them more compatible with URO's cybernetics.

Ottzelloan Grox are most notable for being involved in synthetic production and mining, as well as for probing planets and asteroids which are not hospitable for most.

The Ottzelloan Grox formerly had an incredible amount of soldiers, from the Marinox, Dronox and Conqrix, which are the Grox' creation. They also had the same fleet as the original Grox Empire, but it was rusty due to being cut off. Upon joining URO, the military is used less often.

The Grox society within URO is part of the Kralgon, and the Grox have their own Kralgon Pod to live in. Despite initially being averse to the Kralgon, they are later became most closely associated with them. Most Grox will join research and development programs, or have military. Outside of mining for andasium and designing new weaponry, terraforming is their main role. As they can inhabit uninhabitable worlds, they are excellent at this field of work, also mining operations.

Ottzelloan live in Grox Empire's own specified Kralgon Pods, which explains why they are now most associated with the Kralgon. They also work on all the uninhabitable planets, with their own Pods. This is where they mostly work, and they have a sparse population on more habitable worlds; they don't fit in well with most of the UNO society.

The Grox are already cybernetic, but with UNO's in-body generators and Dark Chronoscopic, the Grox are given an extra attachment. For the Grox, it is simply a charger to charge up the equipment they use in the fleet and in terraforming.

Prior to joining UNO, the Grox Empire technology was not as advanced as the Grox Empires; with no access to the Grox empire, they couldn't import anything, and had to make do with what little resources they had. For this, while their technology went downhill at first, they became steady, and had technology nearly the same as the original Grox Empire.

Prior to UNO, the Grox were using crude designs based on what was left of their blueprints and technology before being cut off from UNO. most of theri technology was rusting and old, too. However, they later combined much of their technology with UNO's technology, which they put much of the input into. Their newer ships are

Grox Assassin - A modified version of Meta-Grox starfighers, assassins are faster contain railguns and electrolasers, and more often than not run on AI; they are used in conjuntion with UNO Figher-Bombers and Tralkik Killers

Annihilators - A large, 800m long starship with particle cannons, railguns and a Staff of Death, Annihilators are incredibly deadly to any enemy, not just because of their staff of death, but also their size and weaponry

When the Grox joined UNO, their rusty ships were improved, with UNO weaponry and technology. Eventually, their ships were combined with UNO's fleet, which they contribute hugely to, along with the Kralgon. Grox technology is still found within the URO fleet, though not Grox ships. 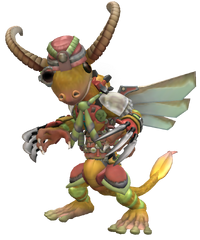 The Ottzelloan Grox, who managed to create a Marinox generator during the Third Ottzello Galactic War, which was useful as the Inalton and Technobian soldiers alone were weak. The generator has had major improvements by the Kralgon and Ioketa, making the Marinox stronger and making them Chronoscopic organisms. The generator was later implemented in with The System. Later, when the Kralgon joined, the Marinox were implemented perfectly with UNO's military, and could be created with Loron and the other soldiers in Killer Pods, while battle was occurring.

Alongside the Kralgon, Loron and Inalton, the Marinox are useful members of URO's militia and defense forces. As they currently use URO's nanomachines, they lack the need for a generator that they once had, as their Kralgon implants fulfil this purpose. The Marinox are strong soldiers, used for police and military forces, in which they are mid to close range fighters. 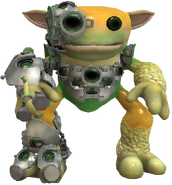