Yes (and rather sharp)

Omnitermine Republic of the Tetra

Omnitermines are the avian species native to currently dead planet Memento. Being the strongest Purgatus species and using remnants of Tier 2 technology, these furious and passionate bards are feared and respected.

Omnitermine evolved from endurant, quickly reproducing birds of prey living in the Purgatus Rift. These birds were hunting in the lush caponies of their homeworld, constantly flying yet building large nests and quite intelligent. They learned to use their feet for grasping and soon developed various tools. Soon, huts were set on the highest trees of Memento while sapient birds farmed herds of reptilian herbivores and grew grain on unforested parts of caponies. They also found ruins of large Radeon spaceship, which helped them to advance.

Since with this uplift they were already advanced to the medieval-level technology, they learned new technology fairly quickly. In matter of half of a millenium they already knew the nuclear weaponry and could make the basic spacecraft. However, their history was also filled with wars - and as their technology progressed, so these wars were becoming more and more horrible. The invention of the hydrogen thermonuclear weaponry marked the new age for Omntermines - the age of the Last War, as they call it. The entire Memento was charred and turned into lifeless rock as the billions of Omnitermines were killed. However, some of the Omnitermines fled the planet with experimental starship designs - only a thousand, but that was enough for their species to survive.

They settled on the habitable planet orbiting the nearby star which they called Tetra, and slowly started to rebuild. Omnitermines culture changed as they, shocked by the horrors of the wars in which their old civilisation was destroyed, turned into a peaceful civilization of artists and thinkers. Soon after, they developed more advanced interstellar drives and colonised the nearby star systems. First empire they met was Masaari Crusade, relationships with which always stayed cold despite the official alliance. Omnitermines became fairly known as bringers of peace and prosperity.

However, during that flourishing, the ancient hivemind known as Amalgam awakened. The plantae spores landed on the lifeless planet Harley, and soon it was turned into lush capony and hub for the Amalgam's crusade to unite all life in the perfect symbiosis. Soon, spores have infected one of the Omnitermine working colonies. The fleet which was supposed to bring resources found the world to be turned into the mutated endless forest, and the mutated and infected Omnitermines who, strangely, were actually happy, and told the fleet captains to peacefully join the Amalgam and "sing the song of life together". Not that Omnitermines agreed.

The Amalgam and Republic of Tetra started a war. Amalgam won at first, because Omnitermines just were not ready for the conflict. Soon, around 50 planets of the Republic were conquered and assimilated to the cause of Amalgam. However, Omnitermines decided to turn to the different tactic. After dissecting Amalgam bodies and their biotech, they found their main weakness - the plant tissues which were highly vulnerable to the herbicides. Hence, soon the Amalgam infected worlds were exterminated and recolonised. Both sides continued a war for fairly long period, as both were equal in terms of power. It was not the Omnitermine vessel or Amalgam bioship who ended the war, but the black spaceship of the dark metal.

On the third year of war, a spaceship entered the Republic and Amalgam territories and bombed their planets from orbit. Around a hundred of them were simply destroyed as Hell was brought on them. Main target of enigmatic creatures though was Masaari colonies. They methodically exterminated most of them. As a result, Amalgam and Republic of Tetra decided to ally for defense, as well as what was left of Masaari Radeons in the Purgatus Rift. Even then, they could not match these aliens - Xhodocto, as Radeons told they are called. Masaari colonists then made a last sacrifice. Using a spacetime distortion machinery, they opened a black right in place of their colonies, destroying most of the Xhodocto fleet but sacrificing themselves and destroying most of the Amalgam and Omnitermine worlds as well. Then, both empires were weakened so war could not happen anymore - and slowly started rebuilding.

After the war with Xhodocto (which was part of the March of the Apocalypse), Omnitermines' politics changed a lot. Omnitermines, shocked from the recent collapse, elected Krell Quellensraum, ambitious and somewhat aggressive politician. Now Omnitermines are advancing at extreme rate. With Radeons destroyed in the March of the Apocalypse, Omnitermines have claimed their tech. They learned how to quench and harness stars which jump-started the production of spaceships and colonies. Recently, they managed to construct the intergalactic drive - which will mark a new era in their history.

Omnitermines are known as intelligent, cultured people, as they enjoy arts and music like no one else. Their senses are extremely acute - so what to one is just a grey piece of rock to theme is a beautiful picture. They are also short-fused, impulsive and quick to anger - but passionate as well. However, if you manage to befriend an Omnitermine you will get a friend for all life. They value friends and almost never betray them.

Omnitermines have advanced robotechnics so they have no need for manual labor. They, however, find value in labors which need intelligence and creativity, which extravert Omnitermines really love.

Omnitermines have advanced technology due to their creative nature, reverse-engineered Radeon technology, and, before their seclusion, trade with allies. Robots made by them are highly intelligent and powerul, and Omnitermines use them for replacing their diminished post-March population as military and workers. Their interstellar starcraft can freely travel between large spaces which divide stars in Purgatus Rift. They also have advanced hyperluminal communication systems as well as unique weaponry. 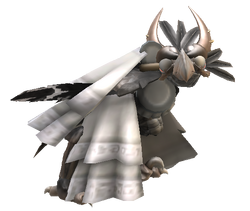 Omnitermines are not humanoid in look - they do not have arms and use their highly prehensile feet for grasping and working while flying in one place. They have extreme stamina and are able to fly for long time, yet they are fragile due to their size and light bones. They have light bony formations around their heads and boides as a form of protection. Females have brighter coloration as well as larger, white eyes. They also have feather crests.

"Protect the culture of our nation,"

Omnitermine Republic of Tetra is a nation of Omnitermines which spans across many star systems. They are fairly known for their advancement and seclusion - external trade is weak and migration from Republic is generally forbidden. However, Republic has several close allies which they find worthy to be communicated with - including Amalgam hivemind and several other empires.

However, inside the Republic of Tetra is a peaceful place. Work is given to all Omnitermines and crime is almost nnn-existant as criminals are punished with their very minds being reshaped. Omnitermines choose their leader, but t(s)he has a massive power, far more than leaders of other democratic states are usually given. Goverment help the poor by providing them with money which is taxed from the upper class. Hence, a social equality is maintained.

Republic citizen are known to be highly educated, and artists and musicians are common.

Omnitermine military is strong compared to the other species of the Rift but they won't endure against intergalactical empires. Their armies are generally composed of several Omnitermine sergeants and groups of robot troopers controlled by them. They have a grid of space stations providing defense from the outsiders - called the Stormstation Ring.

Omnitermines' soldiers are recruited by the goverment. The payment for serving in the army is large so many come to the recruitment centers, but many consider it boring as their military is generally not fighting and is only patrolling the Republican borders.

control while the Parliament does not have a lot of power

Retrieved from "https://spore.fandom.com/wiki/Creature:Omnitermine?oldid=431192"
Community content is available under CC-BY-SA unless otherwise noted.