“At one point of our old history, the Nilito were misjudged. They were treated as slaves and property. If I could go back and punish those old Zoles for their affront, I would gladly do so, for the Nilito have since become a fundamental part of our empire and culture. Without them, we would be nowhere and would surely be extinct many eons ago. I admire their hardy and determined people at all times and wish a few Zoles out there would learn a thing or two from them.”

The Nilito are a race of draconic reptilians native of Planet Zoleia, located at the namesake sector of Zoleia in the Borealis Galaxy's Arm of Knowledge. A subspecies of the famous Zoles, they are likewise members of the Zoles Imperium, and like their cousins they are self-proclaimed paragons of the galaxy who make efforts to pacify it on its entirely, with the ultimate goal of having it a safe place for all races to inhabit and evolve in without the fear of oppression, be it from space criminals to malevolent empires.

Despite their diminutive forms when compared to the Zoles, the Nilito are equally fundamental to the existence of the Zoles Imperium and have equal importance in it as all of its races. While they are generally foul-tempered and easy to provoke, they are nonetheless benevolent, orderly and righteous creatures who defend Borealis from all threats, be them internal or external.

The Nilito and their larger cousins, the Zoles, descend from powerful flying predators natives of the mountainous ranges of Zoleia and achieved sapience roughly at the same time. In ancient times, the Nilito were notably enslaved by the Zoles during the two races's equivalent of the middle ages, and the latter were not able to become independent until the Zoles became sufficiently sophisticated. At around the year 25,000 BC, the first spacefaring nation of the Zoles and Nilito was formed under the name of Zoleia Empire, which promptly initiated a campaign of expansion around their home sector.

At first the Zoleia Empire retained the aggressive mindset of the old rulers of the homeworld, though numerous political reforms eventually led to the empire becoming progressively more accepting to aliens until it finally realized the advantages of having alliances and friends outside of their own sphere of influence. The Heleanorians and the Samilinus would become the oldest and closest friends of the Zoleia Empire for the remainder of its existence, which ended at the Earth year 225 AD when the Zoles monarch known as Telarian Zulouar reformed the empire into the Zoles Imperium. The Nilito people accepted the idea of seeking an utopia as their ultimate goal and have lived since then striving to get as close as possible to it.

Nilito share various similarities with their parent species, the Zoles. Like their larger cousins, the Nilito are draconian beings, though their skin is much more brown-shaded skin, with a combination of black stripes and pruple scales around their torsos and limbs. They also possess scaled crests with eyes on stalks and curved horns, and like the Zoles, their stalks can spin 360º. At the tip of their tails, the Nilito possess an organ which creates poison, which is considerably more concentrated than a Zoles'. They also possess wings, and unlike their larger cousins, they are small and light enough to fly with them.

The Nilito are very often stereotyped as being hot-blooded and aggressive creatures. This is often justified, as they are usually short-tempered and have very little patience in general. However, like the Zoles, the Nilito have evolved to become more friendly and welcoming, while still retaining a very determinated mindset. Nilito overall enjoy war much more than the Zoles and tend to get in fights whenever possible. Like the Zoles, they are also extremely proud creatures, which also makes them "posh" by Borealis standards, and they also show great disdain for races who don't respect laws or cause destruction for no specific reason.

The average Nilito has less than a half of an average Zoles' physical strength and endurance. However, they compensate it by being much more agile than their larger cousins. Nilito fight by delivering fast strikes at their enemies with the intention of eventually wearing them down, and as stated before, they can use their wings to fly, an ability the Zoles lost thousands of years ago. A Nilito's poison is much more concentrated than a Zoles' and causes much greater damage in a much shorter timespan. They can poison enemies with their bites, and like the Zoles, their poison also runs through their own bloodstream, causing predators to be poisoned if they attempt to attack them. The Nilito themselves are, of course, immune to their own poison. 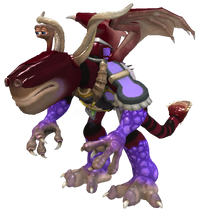 Eliches Inardis is the Prime Minister of the Nilito, and the leader of the species in the Zoles Imperium. He is a determinated retired commandant who serves as one of King Rebaris's highest advisors, as well as aids him in rulling the entire Imperium. Eliches obtained the rank of Prime Minister for his extensive military service, being a high commandant much like Vekaron before he joined the government. He holds many grudges against the Seagon Empire, who he fought several times in the past.

“Weaker than the Zoles, sure, but that doesn't make them useless, per se. I'm not sure why the Zoles ever send them off to fight in any situation, when they are clearly saving resources by having the Nilito do the stuff in the background and sending a more capable soldier off to fight.”

“Needs a bit of cookin', unlike their bigger cousins, to really enjoy. Shame, eh?”

“Overshadowed by the Zoles, I am certain that they possess their own significant influence throughout Borealis.”