The Mor'natio are a species of lesser Corruptus Demon. Created to serve the mortal servants of the Corruptus, they serve as obedient minions, labourers and foot soldiers when better options are unavailable.

The Mor'natio are creations of Shu'wokerama, who came to be when Arrtkar Crowart was transformed into the First Vanguard during the War of Black Fog; to ensure the fallen Vida'Rra would remain obedient, Shu'wokerama saw fit to create the Mor'natio to be a force under his command, while serving as the Nightmare God's eyes towards any potential betrayal. As Arrtkar proved to be fully loyal to the cause of the nightmare, he eventually discarded the servitude of the Mor'natio, seeing them as beneath his status and leading the creatures to spread across the ranks of the Corruptus alongside all other races of Corruptus Demon.

Through the millennia while the Corruptus laid defeated following the end of the War of Black Fog, control over the Mor'natio passed hands across the mortal servants of the Corruptus. Cairaovén at one point controlled the Mor'natio, though she let go of them when she descended into a pure-blooded Corruptus Demon.

With the rise of the modern Vanguards following the Recruitment, the Mor'natio now follow the directive of Mordathai, as Shu'wokerama trusted him the least out of all of his new followers following his failure in killing a young Hachiman, and saw fit to have the creatures watch him and ensure his cooperation.

The average Mor'natio is a bipedal aberration with a spindly body made up of a jawless mouth upon a head adorned with antennae, bony limbs ending in claws and talons, a small torso housing a Corruptus Heart and spikes which grow out of the creature's spine, and a long tail. Pairs of grasping tendrils grow out of their backs, as is typical among Corruptus Demons.

Unlike most Corruptus Demons, Mor'natio are not known for their aggressive disposition. The creatures were created to be labourers and will focus all of their attention on tasks provided to them, ignoring anything that is not interfering with their work. They also show a form of curiosity not present in most Corruptus Demons, investigating new environments in a mostly passive manner. That is not to say they are harmless; if confronted by hostiles, Mor'natio turn ferocious like most forms of Corruptus Demon.

Mor'natio are among the least powerful of their Corruptus Demon kin, as they were created primarily to be assistants and labourers. They are adept at repetitive and labouring tasks, as despite their low intelligence, they always understand the orders they receive from whoever their master is at the moment. When forced into combat, they make use of their claws which can rend most primitive forms of armor. Mor'natio are deceptively resilient for their size and can withstand surprising amounts of punishment, which allows them to shrug off accidents which would injure other lesser Demons. 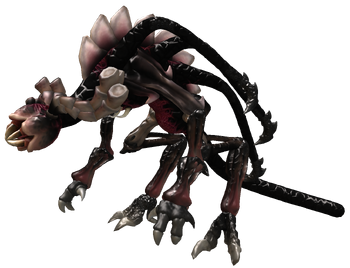 Mor'nakaur is the Prime Nightmare of the Mor'natio. A hulking monstrosity with incredible strength, he has served as the right-hand demon of numerous servants of the Corruptus through the eons, currently serving under Mordathai. Mor'nakaur is an aggressive and impatient creature, with a limited vocabulary and a straightforward disposition to crush and destroy anything that may inconvenience the cause of the Corruptus.