“Speak your thoughts, even though we probably won't care.”

- The Moars and their unwelcoming words.

, "Judge") known mainly by their Daemonium Universal name, The Moars (Moars being a Daemonium Universal translation of "Judge") is a interesting race of demon like organisms native to the extremely hot, sulfuric atmospheric planet of Kólasi. Like the Yorchi, the Moars have a biochemistry of Silicon and uses Sulfuric Acid as a solvent. They are four limbed creatures that use bipedal locomotion in order to move in a certain direction. The Moars are primarily carnivorous, but will eat plants when meat is scarce.

They have developed a society known as the Infernal Republic.

The Moars are demon-like in appearance. Their head has two crimson eyes and a pair of nostrils embedded into the head where a nose would normally be. They have two long, catlike ears that protrude from the sides of their head and they lack a lower jaw, with their upper teeth popping out of their lips and three tongues, the middle one longer than the two outer ones, seemingly hanging out of the head. They have three pairs of horns, one pair at the top of the head and two others below each other on the sides of the head. Their body is slim, yet muscular. They have long, red and crimson rock-like structures that seemingly connects the pecs and the midsection, the hips and the lower body, and the tail to the lower body. Along with this, they have two crimson gemlike structures that protrude from the crevice of their pecs. They have thorns that protrude from the top of the pecs, the shoulders, their back, and the hips of their body. They also have two large, dragon-like wings that come out of their back. They have four fingered hands, including opposable thumbs, for hands and hooves for feet. Their tail has a structure at the end of their tail shaped similarly to a arrow tip.

The Moars compensate for a lack of a lower jaw by their flexible, sandpaper textured tongues. They eat by scraping food off with their teeth and then using their tongues to push food into their throats, where it is then swallowed. From there, the food travels down the esophagus into one of two stomachs, referred to as the "Soft stomach" which digests anything ranging from plants, meat, or anything else a normal stomach can digest. The second stomach, called the "Hard stomach" breaks down things such as bones, shells, etc into basic minerals. When the food reaches the first small intestine, called the "Food intestine", the vitamins, carbohydrates, fats, etc are extracted and is then used by the body. The food then reaches the "Mineral intestine", where minerals are extracted and are distributed to the rock-like structures on the Moar's body as a way of helping them grow. What's left of the food is waste which is then removed from the body via the large intestine or bladder.

The Moars reproduce the same as any other mammal, sperm fertilizes the egg, the egg turns into a zygote, then a embryo, then a fetus, and eventually a baby. Babies take about a year in order to completely develop.

The brain is split into three sections, the front part of the brain (named the "Fore Brain") controls emotions, judgement, problem solving, and short term memory. The middle part (named the "Central Brain") is in charge of voluntary movement, and the back part (The "Rear Brain") is in charge of involuntary and long term memory. The brain stem connects the brain to the spinal cord, the stem is responsible to carrying out the most basic actions of the Rear Brain should the Rear Brain be damaged or removed, however it cannot store long term memory. The different regions of the brain work together, but this is rare.

The heart works the same as a human heart, it has two chambers, the left one responsible for pumping oxygen-less blood to the lungs and the right one responsible for pumping oxygen rich blood to the body. However, the heart isn't tilted left like a human heart, rather it stays upright. This means the lungs are evenly sized, but that's the only difference from a human lung to a Moar's. However, the lungs are accompanied by other organs that filter out harmful gases from oxygen. The Sulfuric Hold is a pair of small organs above the Carbon Dioxide Hold and is connected to the windpipe. The Sulfuric Hold is responsible for filtering out sulfuric gases from air and hold it in until it is released in exhalation. The Carbon Dioxide Hold is a pair of organs half the size of a lung and is connected to the windpipe and is below the Sulfur Hold and above the lungs. This pair of organs are responsible for seperating carbon dioxide from air and hold it until it in until it is expelled in exhalation.

The rocks on the Moar's body are formed from minerals and calcium digested by the body. These rocks come in two types: Hollow and Full. Full rocks are usually put on parts of the body that cover vital organs as means of extra protection, while hollow rocks are usually used to cover up privates. Rocks can be pried off by the Moar should the need to remove one arise.

Female Moar's have a pair of mammary glands on the chest like human females. These breasts are usually covered by a especially large hollow rock. Female Moar's are generally more elegant in appearance, they have a well defined but not too large hourglass figure. Along with this, the horns on their head are half as long as a male Moar's horns.

The Moars are unkind to other species. Generally, any species they put below themselves are usually in danger of getting robbed from, attacked, or -if the Moars can afford it- having war declared on them. This doesn't mean they are impossible to befriend, but it should be noted that they won't hesitate to obliterate even allies should they get in their way.

The Moars are, however, very loyal, truthful, and charitable to others of their kind. Some to the point of dying for their friends. This has grown a strong bond with the Moars amongst their kind. In the big picture, this keeps crimes low and the economy flowing smoothly without things like stealing or fraud. 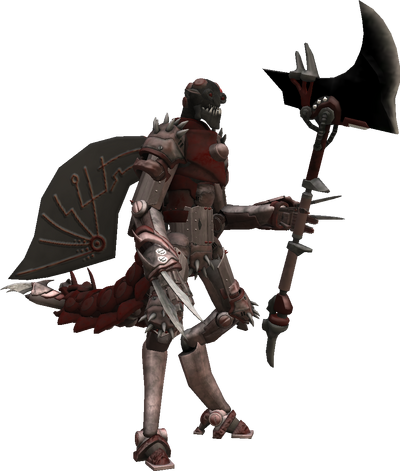 Hades is the war general of the Infernal Republic. He is given the responsibility of controlling the Moar's armies. Once a orphan who nearly lost his eye, after enlisting into the army, he eventually went up the ranks with speeds so impressive President Satan actually added Hades as the War General in the, at the time, still flourishing empire. Armed with a waraxe that has harbored the bloodstains of all colors from many enemies, Hades is a force to be reckoned with.

Diablo is the Vice President of the Infernal Republic, given the job of the presiding officer of the Republic, he makes sure everything is in order in different solar systems. Overall, he says that his job is "overall slow" and "same ol', same ol'", but he is still grateful for the job he has and thanks President Satan for choosing the role for him. Diablo is a nice guy for a Moar, just be sure to never shake his hand.

Quotes from Others Edit

“A form truly untarnished by the savagery of nature and her cruel whim. My kind may only wish for a body so endowed as theirs.”

“Strong. Resilient. Unyielding. Ruthless. Perfect soldiers in our Hegemony. For that I will see how they answer the drums of war.”

- Imperator l'Hurinhus, Mastermind of the Hegemony attack on the Moars

“Disgusting demons! I would see a thousand, no, a million of their kind burn! Demonkind has no place in the realm of mortality!”

“Vile things and an affront to all that is holy! All of you, begone from this galaxy!”

“Intriguing lifeforms. Though we might not like their attitude, they are quite unique and worthy of preservation”

Retrieved from "https://spore.fandom.com/wiki/Creature:Moar?oldid=847993"
Community content is available under CC-BY-SA unless otherwise noted.