The Miluiel are an enigmatic and elusive race of Capricyránae native of the Unknown Regions of the Cyrannus Galaxy. Artificial entities of great power created by the Oikoumene millions of years before the rise of modern galactic civilization, their primary function is the protection of the rest of the Capricyránae kind against the threat of extinction and to serve as vanguards of their creators. With the disappearance of the Oikoumene, the Miluiel awaited the return of their true master, Apolithanatár.

Mysterious, graceful and powerful, the Miluiel are well known for their powers, with even inexperienced members of their race being able to manipulate the Light, often doing it in order to manipulate the elements of nature. While welcoming and friendly, the Miluiel are in fact hardwared into servitude of the Oikoumene, which makes them verge on lacking emotions. None but the highest ranking members of the Galactic Empire and Republic know of the truth behind the Miluiel, and the race itself is unwilling to share their secrets with other species, even those they were created to protect - doing so would spoil their purpose entirely.

The Miluiel are sometimes described as being the first Capricyránae race after the Oikoumene themselves, though the title is contested due to them not being a naturally evolved species. Instead, they were artificially created by the ancient Vosaus of the Oikoumene Empire during the Apotheosis Era as a race of mortal servants whose task in existence was ensure the safe evolution of the Twelve Tribes - in the event their development into society was threatened, the Miluiel were to act immediately, though they were not allowed to reveal their true nature to them. After the Tribes reached space, the Miluiel were to await for the return of their master following the Oikoumene's disappearance at the end of the Apotheosis Era.

Controlling a small and quite secluded empire at the Unknown Regions, using the Oikoumene superconstruct known as Ambar as their equivalent of a homeworld, the Miluiel watched over the evolutions of the Libertus, the Thanatyrannus, the Osteola, the Cavaneu, the Basileus, the Apationagtus, the Mataii, the Dromeourus, the Corthrinus, the Fernei-Tuu, the Saurornithanta and the Bisistar while protecting them from potentially destructive events such as meteor showers at their homeworlds of hostile alien invasions in their prehistory. The paths followed by each race were not of the Miliuel's concern, and after each achieved space travel, they allowed them live on to their own devices and create their own futures no longer requiring the protection of the artificial race.

With the rise of the Capricyránae into space, the Miluiel found themselves invited into a galactic society for the first time in over 70 million years. They would be discovered by the First Republic and invited into their ranks, which led their race to become secretive but supportive members of a galactic republic. The Miluiel would remain present in the nations founded after the decline of the Old Republic, including the Federation of United Worlds and the United Republic of Cyrannus, with their kind becoming more commonly seen outside of their own space after the beginning of the Intergalactic War.

Under the United Republic, the Miluiel became known as being the protectors of the President, with well known events being a pair of Miluiel guardians defending the then-president Apollo from a Cogsangui Martyr, and their actions against the demons of the Corruptus during the Second War of Black Fog. Despite their unwillingness to share specific aspects of their government and culture - namely, those related to their links to the Oikoumene - with the rest of the Republic, they nonetheless became popular and seen as one of the fairest and most admirable races in the galaxy.

When the Republic fell and the Galactic Empire of Cyrannus rose from its foundations, the Miluiel were confronted by what they had awaited so long for: an actual Oikoumene for them to follow. Their population pledged itself to the Empire, though it did not take long for Emperor Tyrómairon to realize the Miluiel were not acting to their full extent under his rule. He was not the Oikoumene they were waiting for, which led the Mornûnendur and the Phaedric Order to take efforts to manipulate them into servitude, with variable degrees of success.

The rise of the Primercer did not affect the Miluiel, who reacted to it with indifference, much to the surprise of some of the Mornûnendur. However, this served as the final proof of what the Dark Lord was expecting. The Miluiel were liberated from Imperial control following the Battle of Ambar, where they pledged all of their allegiances to their returned master, Apolithanatár.

The Miluiel are easily recognized by their typically golden scales which emit an aura of light around them. Other colourations range from darker shades of gold to darkened red, though they all retain the aura of light. Oikoumene currently leading the Galactic Empire, such as Thaurlathrón and Emperor Tyrómairon himself present themselves to the population as red-scaled Miluiel of great size. The average Miluiel is physically superior to all other Capricyránae in all aspects thanks to their arguably divine heritage, being the largest and tallest of the races, and displaying greater feats of strength, agility and endurance than any of the others, all while retaining a graceful control of their movements.

Out of the Capricyránae races, the Miluiel are predictably the closest to the Oikoumene in a biological scale, sharing a substantial amount of their genetic structure with them. The Miluiel are creatures of pure Light, granting them the ability to do feats such as levitation and casting power offensively as pulses of energy which have proven effective against the likes of armored soldiers and Corruptus Demons. Miluiel are biologically immortal and can only die from external sources such as violence, and in the event they are killed, their bodies turn into ash, a process the Miluiel themselves describe as them 'returning to the earth'.

Miluiel are fair, kind and social creatures among not just themselves but also with aliens, with concepts such as speciesism being non-existent despite their biological and technological superiority. They are naturally attuned with nature and feel comfortable in worlds where it has not been defiled, making them opposed to certain concepts such as ecumenopoli. Aliens who spend time with the Miluiel are said to be calmed down by their sheer presence, which may be one of their many powers. However, those who have studied their race more closely claim the Miluiel are somewhat hollowed in terms of personality - as they are artificial and hardwared into servitude, they have the mindset of biological machines. While Miluiel possess emotions, they sometimes tend to have difficulty expressing them to strangers and can come across as more stoic than they mean to be.

Much of the Miluiel's culture is hidden away from the rest of galactic society, as they are hardwared into keeping their connections to the Oikoumene a secret to the rest of the galaxy. Extremely secretive, it is a feat for an alien to gain passage into their worlds, and even then, it is said none have seen their homeworld since the times of the First Republic. Their empire is believed to only span a thousand or so systems, with galactic expansion being considered irrelevant to their interests. Likewise, they have remained technologically stagnant since their creation millions of years ago, meaning they have not advanced further than they were gifted with, while still making them one of the most advanced races of the Cyrannus Galaxy, sporting the closest technological marvels to that of the Oikoumene. Their secretive but welcoming culture means that, while they do not seek aliens, they are warm and friendly to those who find them in turn. 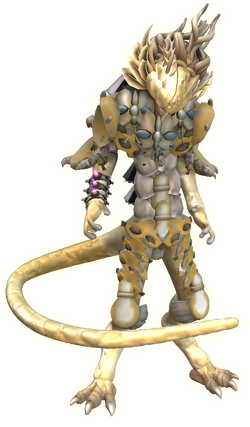 “My old life was one of light. My new life shall be quite different.”

Mezzadriel was a female Miluiel who occupied a high rank within Tyrómairon's Phaedric Order. Like all Miluiel, Mezzadriel was an artificial construct created by the Oikoumene countless millennia prior to the Great Cyrannus War, created as a harbinger of the Lord of Light Apolithanatár. Like all Miluiel, Mezzadriel was created to serve and protect sentient life in the Cyrannus Galaxy, a task which ultimately led her to join the United Republic of Cyrannus as an official guard to the President of the Republic. A staunch protector of Apollo, Mezzadriel would fight off demons and even agents of the Dark Lord. When the Great War ended with the rise of the Galactic Empire of Cyrannus, Mezzadriel attempted to fight off the influence of the Dark Lord, but to no avail. She, like her people, would be hardwired into serving the Oikoumene Lord, with Mezzadriel being further corrupted by experiments carried out under the aegis of Mormuadáin. Though she knew deep down that she did not belong in the Emperor's service, she ultimately had no choice but to serve, eventually convincing herself that her devotion was of her own free will.

The return of Apolithanatár in the second decade of the Empire marked a subtle shift in the Miluiel toward the Light, though Mezzadriel remained committed to the Dark Lord. She was killed at the Battle of Ambar in 15 NE, finding serenity in her last moment free from Tyrómairon's clutches. Her death marked the liberation of the Miluiel from the Empire, with her kin joining the Aldárae Order.

“My loyal bodyguards. I am forever in their debt.”

“Tools for the Grand Plan. They prove as useful as they are problematic.”

Retrieved from "https://spore.fandom.com/wiki/Creature:Miluiel?oldid=804460"
Community content is available under CC-BY-SA unless otherwise noted.