The Mataii are the seventh tribe of Capricyránae and are native to the Outer Rim of Cyrannus. The Mataii are naturally very peaceful, but quiet and at times submissive to the wills of more forceful empires and individuals. Still, in times of great need and hardship, the Mataii can be very strong willed and powerful in their opinions and resolve. They are known across the galaxy for their great culture, which employs music, food and wine, which makes Mataii worlds very hospitable and welcoming.

They are native to the Outer Rim world of Tega III, a warm planet of tropical forests and rolling plains, perfect territory for maniraptorians like the Mataii and their relatives. They are primarily traders and their magnificent gold starships are a welcome sight of trade for many species across the galaxy. Other members of their race are involved in more sinister activities through the Cyrannian Syndicate.

The Mataii were uplifted by an unknown species thousands of years ago and became an influential member of their local space. However, after a series of wars with neighbouring empires, the empire began to fracture, and the Mataii began to dwindle toward extinction. Things could only get worse, when they accidentally angered the Cavaneu Intersteller Union, whom at the time where under the rule of a corrupt leader whom the Mataii angered.

One by one, the Mataii fell to the might of the Cavaneu. After the initial invasion only their homeworld Tega III survived. However, a massive Cavaneu fleet appeared, which prompted the Mataii to evacuate. However, only five million survived, out of an initial thirteen billion. The Mataii began to scour the galaxy to find a new world on which to call home, eventually finding one on which they began rebuilding their civilization.

Hundreds of years past when the Mataii shrank into the shadows, but when a URC vessel landed on their new homeworld, New Tega, they once again spread across the stars, joining many different organizations, until a time when they became common across the galaxy. In the year 3 BTC, many Mataii began to return to their own species, establishing the Mataii Guilds, a powerful trading empire.

Soon after, the Mataii began exploring and trading in the unknown regions of Cyrannus which are considered dangerous by both the United Republic of Cyrannus and the Confederacy of Allied Systems, who both exercise caution when travelling into the region. However, the Mataii have a lust for exploration, which often prompt them to trade with the lesser known empires that inhabit the huge expance of space within the Unknown Regions.

While in hyperspace, two Mataii vessels suddenly picked up an unknown hyperspace interdiction field, which deactivated their hyperdrive, leaving them stranded in normal space. The captain of one of the vessels assumed it was a Republic patrol searching for secret Confederate tradelanes, but why so far from the Core Worlds and even beyond the Outer Rim? Scanners reported a huge cube shaped ship approaching. But before the Mataii could send a transmission the ship opened communications, the voice that came sounded metallic and rather high pitched warned them that they had entered Grox territory.

Before the Mataii had the chance to respond, the Cube fired two superlaser like weapons, destroying the two unarmed ships. In the aftermath of the slaughter, the Grox began accessing the knowledge archives of the destroyed ship's database. This event brought the Grox into the Great Cyrannus War, something that the Mataii deeply regret. However, they honoured the captains and crew that died that day.

In 3 ATC, the Mataii joined the Universal Trading Union, and later became members of the Galactic Empire of Cyrannus, though many individuals such as Rivergron remained loyal to organisations like the Cyrannian Syndicate. 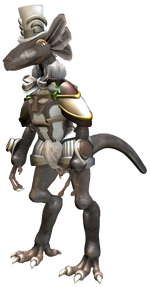 “Hmpf. Get out of my sight, peasant.”

Lord Rivergron Vito-Litus is a notable Mataii known for his gigantic and yet expanding fortune, which makes him one of the richest individuals of the Cyrannus Galaxy. Rivergron was born on a noble family at the Mataii homeworld of New Tega, and as time passed, he became the richest of all Mataii by manipulating bounty hunters and space pirates into his will. He eventually became a member of the Cyrannian Syndicate, being an important member of it.

When the Galactic Empire of Cyrannus was formed, Rivergron saw great opportunity in expanding his fortune by manipulating the Universal Trading Union in the name of the Empire, which made him grow in popularity in the Imperial government as well as highly increased his profts. However, many are starting to suspect of Rivergron, and if he is discovered, flattening the Imperial war machine will not stop it from coming after him...

“You are officially the friends of the Guilds!”

“No trading with you, mister.”

“Ah, the Mataii! They sell some of the best things in the galaxy!”

“They remind us of ourselves. Got some interesting stuff to sale too.”

Retrieved from "https://spore.fandom.com/wiki/Creature:Mataii?oldid=804158"
Community content is available under CC-BY-SA unless otherwise noted.