“Hateful cybernetic terrors! All of them! They hunger for the destruction of all biologic life, blinded by hatred toward us. For the safety of the entire galaxy, they must be completely and utterly eliminated!”

The Marinox are a subspecies of Marinar created by the Ermitant scientist Errr during his service under the Grox Empire. Considered the Ermitant's greatest work, the Marinox were created through bioengineering and mechanization of a number of Marinar individuals who fled their homeworld and put themselves into cryogenic sleep, where their drifting spacecraft was eventually recovered by the Grox who saw potential on their unique biology.

Famed for their body flexibility, the Marinar are a race of cold, emotionless warriors who have no purpose but to serve the Grox and their assets. Considered the arch-enemies of the Dracogonarious people, the Marinox have waged war on them for hundreds of years, rising again and again after falling and only recently experiencing their ultimate demise with the defeat of the entire Grox Meta-Empire. To this day, the Marinox remain one of the most feared creatures in the Dracogonarious' history.

The Marinox were created in the Milky Way Galaxy by the rogue Ermitant scientist called Errr from the frozen bodies of the Marinar, after he joined forces with the Grox Meta-Emperor. The nexus of their power was Planet Kaizox. They initially started to colonize the star around Grox systems, which gave them extra protection from attacks, but soon they started to expand to outside of the Core, which also encouraged the Grox into expanding. Soon, the Marinox were as big as their masters, and aided them into attacking their enemies. This led to a long reign of terror of the Grox in the Milky Way, which would only end when the Dracogonarious Empire made their move. After establishing then as permanent weapons, the Milky Way Grox send some Marinox drones to other galaxies for them to create their own armies.

After about 100 years of attacks, the Milky Way empires, led by the Dracogonarious, managed to storm into Planet Kaizox and destroy the Marinox Life Generator, a gigantic radio source that was responsable for the Marinox to be alive. Destroying it burned the Milky Way Marinox to death, while the ones located in other galaxies simply died without further damage to their bodies. The defeat of the Marinox was a heavy hit on the Grox Empire, which would later lead to the total eradication of the Milky Way Grox. The Marinox were considered extinct at this date. In other galaxies, the Grox stored the deactivated Marinox bodies in cryogenic sleep until they could create more Generators. However, because of all the other conflicts currently happening, the Grox eventually forgot about the Marinox, and would only remember them over 500 years later.

The Marinox have returned to activity sometime during the Second War of Black Fog, now scattered around the entire universe. Their first real move after their revival was during the Conflict of Vengeance, where they aided the Grox in hunting down the Magellanic Sovereignty of Planets in the Large Magellanic Cloud. While managing to damage the MSP, they were not able of destroying it. With the defeat of the Grox Meta-Emperor in the New Grox Wars, the Marinox Empire once again came to an end, and the Marinox of the Meta-Empire are now members of the Civilisation.

Like their Marinar ancestors, the Marinox are tall, amphibian creatures with a structure similar to terran salamanders. However, they possess varous differences. Their skin is coloured like the one of the Grox as opposed to the Marinar's original blue and purple scales. They possess large jaws filled with sharp teeth, three rows of black, beady eyes and large, characteristic horns. The fins they possessed as Marinar were completely removed to make way for cybernetic enhancements. Their hands have very large claws, while their feet are webbed in nature. Their skeletons are frighteningly flexible, being almost rubber-like in nature. Marinox are genderless creatures and reproduce through cloning.

As opposed to the Marinar's previous malevolent society, the Marinox possess absolutely no culture whatsoever. They were created to be servants and this is the only thing they do. When not under orders, Marinox are completely passive. When in battle, Marinox display no emotions and merely fight until they defeat the enemy or are defeated themselves. They are completely indifferent and emotionless creatures. However, they will go great lengths to defend the Grox or whoever they identify as their masters, going so far as to sacrifice themselves to do so.

Marinox are incredibly flexible creatures, even more so than the Marinar thanks to their cybernetic enhancements. They can bend their bodies in unnatural ways to evade attacks or to attack enemies themselves by moving unpredictably. In physical terms, the Marinox are ten times stronger than a Marinar and have large claws they can use to grip and rip their opponents with. They can charge at their enemies and headbutt them with their horns. Marinox can survive in extremely hostile environments and do not require food, drink or air to live. Being cyborgs, they have unlimited lifespans.

Note: Users are no longer allowed to create new Marinox characters or subspecies. Subspecies not listen below are not canon. 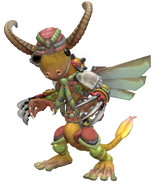 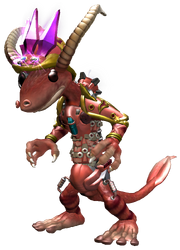 “Errr's will is to be followed.”

Emperor Marigrax was the very first Marinox drone and acted as the species' equivalent of a Grox King during the first incarnation of the Marinox Empire. He was actually a puppet emperor, the real leader of the species being their creator, the Ermitant scientist Errr. Marigrax was destroyed during the Battle for Planet Kaizox by Captain Drakley. 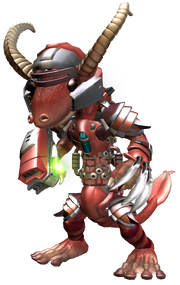 “You will be exterminated.”

Commandant Karnak was the highest ranking supersoldier of the original Marinox Empire, acting as a personal enforcer of Marigrax and Errr's will. He was famous across the galaxy for his rivalry with the Dracogonarious captain Drakley. Karnak was destroyed during the Battle for Planet Kaizox by Captain Drakley. 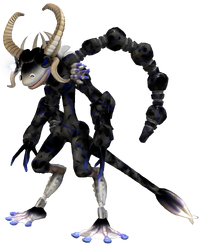 Commandant Khensu was a biologically and mechanically mutated Marinox servant of King Mirras III who acted as an extension of his own body via a powerful group mind between the two. Khensu was an extremely powerful psychic, and the most powerful soldier of the Borealis Grox Empire before its destruction. Khensu was destroyed during the Second Borealis Galactic War by the Polar Crystal Alliance. 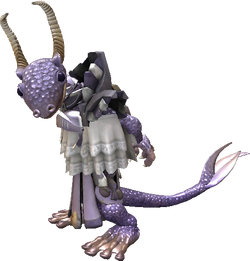 Ptolemeus is a former Marinox drone of the Milky Way who, after being sent to Andromeda to recover an artifact, suffered a glitch on his programming which led him to rebel and steal the artifact for himself. As a reward for this, Ptolemeus was ascended into an Isio'Nar by Sanktanaar Felaanith. 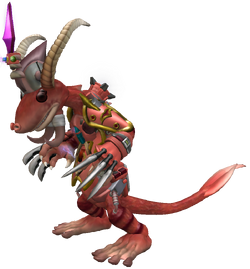 Rhoeskarg Apolon, original name unknown, is a revived Marinox who was accepted as commander of the Groxic Empire of the Kraw Galaxy due to his past skills around 600 years ago. He was revived in 28/08/402 KRE and reprogrammed to have the same ideology as the KGGC. He is one of the 30927 Marinox revived on that day. 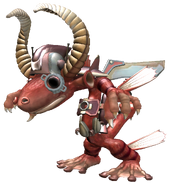 First model of the Marinox

Retrieved from "https://spore.fandom.com/wiki/Creature:Marinox?oldid=804622"
Community content is available under CC-BY-SA unless otherwise noted.