“They were at one time the worst enemies of our race. During pre-civilized times, the Dracogonarious and the Marinar were in permanent war, a constant struggle for the domination of the planet. But we persevered, and today, they have been pacified. Nonetheless, the hostile members of the race would eventually become some of the most vile entities the First Gigaquadrant has ever encountered.”

The Marinar are a race of amphibious, salamander-like aliens native of Planet Draka-2 in the Milky Way Galaxy. Natives of the same homeworld as the Dracogonarious, the Marinar was once the arch-nemesis of the crocodilian dragons during pre-spacefaring times, dominating their oceans until they were defeated and absorbed into their government. However, a portion of their population fled to space and was eventually turned into the Marinox and subsequently, the Marinoxidiz.

The Marinar are one of the most militaristic races currently living in the Indoctrinate Collective, having a war-centered culture and having an extensive presence in the Collective's military ranks. Some Marinar who still hold grudges toward the Dracogonarious Empire and its successor have joined the Vengeful Claw, where they hope to destroy the Collective on its entirely. Overall, the Marinar have earned their place in galactic affairs in their nearly sixty thousand years of history, ranging from being war heroes to evolving into one of the deadliest enemies of the Dracogonarious people.

The Marinar evolved their own underwater civilization while the Dracogonarious made their land one. While aware of each other, they had an uneasy peace. When Gareile Kronk developed the first spaceship, however, the Marinar attacked the Dracogonarious once again. While the species was left near extinct, numerous individuals managed to steal these spaceships and escaped the planet. These Marinar were trapped in cryogenic sleep, and their ships travelled all the way to the Milky Way's galactic core. Eventually, they were found by Errr, and were then turned into the dreaded Marinox. The surviving members of the species still at Draka-2 surrendered to the Dracogonarious and became members of the Dracogonarious Empire, and later the Indoctrinate Collective.

Marinar are tall, amphibian creatures with a structure similar to terran salamanders. Their skin is soft and blue in colouration, filled with spots in a deeper shade of blue. From their torso down, their skin change to a tone of purple. They possess large jaws filled with sharp teeth, three rows of black, beady eyes and large, characteristic horns. They possess fins on their arms, backs and tail which all aid them in swimming. Their hands have very large claws, while their feet were webbed in nature. Their skeletons are frighteningly flexible, being almost rubber-like in nature.

The Marinar evolved with a mindset of "might makes right" and as such, they were conquerors and warmongers as opposed to the passive and logical Dracogonarious. Their culture was considered barbaric by the ancient Dracogonarious, being centered around the idea that the Marinar were destined to rule with the Dracogonarious serving as their slaves. When the two factions developed cities, the Marinar accepted non-aggression pacts with the Dracogonarious, but only with the intention of eventually backstabbing them. The current generation of Marinar has since abandoned this mindset, becoming one of the Collective's main military races.

Marinar are incredibly flexible creatures. They can bend their bodies in unnatural ways to evade attacks or to attack enemies themselves by moving unpredictably. In physical terms, the Marinar are about as strong as human beings, but they have the advantage of having large claws they can use to grip and rip their opponents with. Marinar are excellent swimmers and can swim at very high speeds, as well as breath underwater thanks to their amphibian nature. They can charge at their enemies and headbutt them with their horns, this attack being much deadlier underwater. 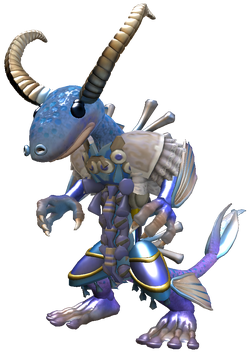 “Do not mistake us for brutes. It is the first step to your demise.”

Kanukh Aaryxes is the first and current Supreme Advisor of the Marinar in the Indoctrinate Collective. Before the nation was founded, she already served as a Supreme Advisor of the Dracogonarious Empire, representing the Marinar people regarding Imperial affairs and pledging loyalty to the Collective once it was formed. Cold and calculating, Kanukh is greatly unamused by those who compare her people to the Marinox, and is not above proving them otherwise, be it through arguing or superior firepower.

“My species is the great example of how lowly beings can become powerful beyond imagination.”

“To live in another's shadow deals great blows to the pride of a people; one can only gather sympathy for their kind worked to rise beyond the constraints that withheld them throughout time. No longer are the shadows cast above their heads, thus no longer can they boast their justice of war.” 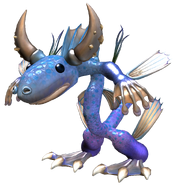 First model of the Marinar