“It would be wrong to define these creatures as animals. While animals can be hostile and predatory, they cannot be... hateful. Scornful. Animals fear certain people, but they do not hate them like these do. And that is what makes these fascinating, if dangerous, creatures so distressing; they are not animals, no, yet the only thing they know and will ever know is spite.”

The Malcaeum, also known as Bloodfiends, are a species of Corruptus Demon who act as the main and most numerous foot soldiers of the Corruptus. Fabled for their perpetually angered behaviour and their demon-made blades which can cut through even the most advanced alloys, the Malcaeum are individually not as powerful as other demons, but in large numbers, they may be the downfall of entire civilizations.

It is widely believed that the Malcaeum were the first race created by Shu'rimrodir following his rise to demonhood and godhood eleven billion years in the past, created as aspects of his hatred toward the universe. While it is speculated that they were created in the Milky Way Galaxy, this cannot be determinated due to general lack of knowledge about the old Corruptus' exact place of origin. The very first Malcaeum became known as Shu'rahkavarh, and he was the first of his kind to evolve into an Alpha. Even after several billion years, the Malcaeum remain as the Corruptus' main troops, even after their reforming into the Dominion of the Xhodocto.

Malcaeum are demonic in nature, meaning their biology do not match those of standard aliens. Appearance-wise, they are vaguely reptilian in looks, sporting a powerful maw filled with jagged teeth and an impressive crest on their heads. Their skin is leathery and is described being intensely hot to the touch, enough to cause third-degree burns on most creatures via prolonged exposure. Malcaeum do not possess organs, bones or vital fluids, with their interior being nothing but liquid Nightmare energy.

The Malcaeum are well known for being in a perpetual state of rage for everything not identified as an allied demon. As opposed to the Shu'olerthae who focus on converting other creatures into servants, Malcaeum would rather destroy everything and everyone. They take glee in inflicting pain and enjoy killing their victims gruesomely, though Malcaeum are generally uninterested in torture and prefer killing their enemies swiftly so that they may move on to the next target.

As Nightmare demons, Malcaeum make use of Nightmare energy for combat, using it to strengthen their weapons so they may deal additional damage to their opponents. They can spawn tentacle-like appendages from their bodies, but their preferred mean of combat is by using a Malcaeum Greatsword, a weapon crafted from solidified nightmare energy in a shape similar to that of a slightly curved greatsword. Malcaeum are physically strong enough to wield these weapons with one hand, but humans would find it impossible to lift it up without assistance. Malcaeum Greatswords can cut through most known alloys, armor and shields. Despite potentially being able to, Malcaeum make no use of ranged combat. Additionally, their sheer presence causes mortals to become overcome with feelings of rage and distress unless they possess extensive mental training, which can disrupt their concentration or possible mental abilities.

An Alpha Malcaeum, also known as a Bloodlord, is a Malcaeum who has survived for a very long period of time - believed to be around the ballparks of a million years - without being slain in battle. Compared to their standard kin, the Alphas are roughly three times taller and several magnitudes more powerful, thanks to an inherit power boost that comes from their metamorphosis and their sheer combat experience. Alphas have tampered their rage to the extent they are a contrast to their lesser counterparts, being calm and highly methodological in battle to the point of using complex strategies, while regular Malcaeum tend to simply charge mindlessly at their prey. Alphas are deeply revered both by mortal servants of the Corruptus and by their lesser kin, often assuming positions of authority among them as a result. 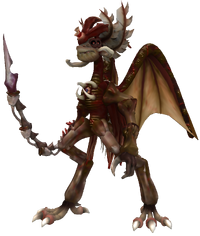 “The universe will burn.. and in the end, only dark will remain.”

Shu'rahkavarh, most known as the Skewer is the first of the Malcaeum, the first to become an Alpha and the most powerful member of the Malcaeum race. As ancient as beings such as Shu'ytrogarva and Shu'suvreca, the Skewer has terrorized the universe for eons with his immense spear-like arm, which he uses to skewer through multiple victims before devouring their souls on the spot. Like his masters, he currently serves the Dominion of the Xhodocto.

“You honestly don't know what it really means to piss yourself when you haven't seen a seven-foot tall demonic lizardman come at you while one-handing a humongous sword without a sweat. What's worse than that? When there's an army of them coming at you.”

First model of the Malcaeum