“For the longest time, the Mahanayan people were the nightmare-men of the universe. Terror and destruction followed with wherever they went and the most dreaded names were the fanatics of their kind. With Tuuros opening up and these Mahanayan states in the Borealis Galaxy, maybe we were wrong to judge them as innately evil.”

The Mahanayans are a race of pseudo-equine lifeforms hailing from the desert world of Mahanaya, within the Tuuros Galaxy. Ancient and mysterious by the standards of the First Gigaquadrant, the Mahanayans command the respect and fear of nearly everyone they encounter. In much of the Gigaquadrant's history, the Mahanayans have been known for their affiliation with the Dominion of the Xhodocto; garnering them a reputation that often inspires catastrophe in their wake. In truth, most Mahanayans are in fact peaceful and meditative by nature, and their anger is slow to rise yet terrible to behold.

Despite the fearsome atmosphere that surrounds them, not all Mahanayans known follow the Dominion of the Xhodocto. The Mahanayans originate from the Spiritualist Dominion of Mahanaya and a diaspora of Mahanayans also live within the Mahanayan Borealis States, under the politically close watch of the Borealis Galaxy. The Mahanayans as a whole are almost a frightfully advanced race, though their quiet and shadowy footprints on the First Gigaquadrant rarely draws any eyes to their presence. Because of this, the Mahanayans are the subject of esoteric and occult interest to some, although few are granted the privilege of living among them.

Mahanayans typically are a desert-faring race, and thus most comfortable in high temperatures similar to those found on their homeworld of Mahanaya. It is known that humid environments can prove detrimental to a Mahanayan's health, and thus they choose to colonise (or terraform) candidate planets for habitation. Mahanaya's highly unforgiving enviroment has evolved the Mahanayan race into an exceptionally hardy species. Mahanayans are among the Gigaqudrant's strongest species - it is known that the Vranntan warrant caution around Mahanayans despite being larger and heavier than them. Despite their heavy frame - some reaching almost a ton in weight - the build of a Mahanayan's legs allows them considerably fast pace - the fastest of their kind can reach speeds of 50 kilometres an hour in a sprint. Whilst the Mahanayans are known for their overwhelming strength, much of it lies within their legs. A singular kick of a Mahanayan is known to cause severe damage to most species in the Gigaquadrant, and, to some, able to sever limbs or destroy the torso entirely.

Mahanayans also are typically more intelligent than the common denizen of the First Gigaquadrant - to what extent is unknown, though the Mahanayans have a particularly quick grasp of language, as well as the ability to recognise complex patterns in visual situations. Most examples of their intelligence is through the perfect recital of mantra or spiritual text, although much of their mental capacities reflect on their sensory abilities. Due to the wide spaces and dangerous weather of Mahanaya, Mahanayans have a superior sense of scent, sight and hearing in order to detect far-off predators. Their luminous eyes are thought to be an evolutionary trait to detect members of their own kind in inclement weather.

Although not well understood by the Gigaquadrant, Mahanayans have considerable potential for Essence manipulation. Many of the more spiritual circles among them have explored the practice of essence for several millennia and it is thought that a number of Mahanayans have attained immortality from years of meditation and practice. Due to this, no one within the First Gigaquadrant is entirely certain as to how long a Mahanayan lives for, although many estimations suggest between three to five thousand years.

Mahanayans are intelligent to an unusual level, and in part is reason for their introverted nature. It is rare for a Mahanayan to freely converse with a foreigner; Mahanayans frequently ignore the presence of others and are somewhat easy to offend as a result. Reasons for their introverted nature are not entirely agreed upon, but it is thought that Mahanayans are not confident that foreigners are receptive to their enigmatic practices and culture, and thus tend to shy away from those who are not open to other lines of thought. Some mistake the composure of a Mahanayan to be aggressive, and whilst Mahanayans are capable of aggression, are generally slow to anger. When offended, Mahanayans tend to further ignore the offender or may even verbally rebuke them. Due to this, it is very uncommon to see a Mahanayan outside of their territories.

With a preference of objectivity, Mahanayans are spiritual by nature and have a balanced approach to their perceptions on the First Gigaquadrant. With a belief that balance is a goal shared by all, Mahanayans hence believe that all actions to inspire balance is necessary - including violence, war and death. However, Mahanayans themselves rarely partake in violence (except those in the Dominion of the Xhodocto) and believe that there are other, more deserving actors in the universe that shall bring this about. This does not mean the Mahanayans are entirely pacifistic; Mahanayans have been known to engage and kill aggressors if their lives are threatened. Some thus believe the Mahanayans are apathetic to the fate of the Gigaquadrant, although most Mahanayans would hold the belief that evil is necessary but not to become a part of.

The societal structure of Mahanayans is not entirely understood, and in turn many tend to agree that Mahanayan society is aristocratic. Adhering to the ancient and tribal laws that have stood in place for several hundreds of millennia, Mahanayan governance is by technicality a confederation of clans of whose heads partake in democratic government. Over the course of time, Mahanayan society has remained relatively stable, although there are known rebellions against their structure (Hez'Kalka being a known opponent). There are also several schools of religion within Mahanayan society, although these are typically exclusive and often entail the abandoning of one's own family. Some of these sects, such as the Colossi take a more martial approach to their beliefs and are warriors by function. 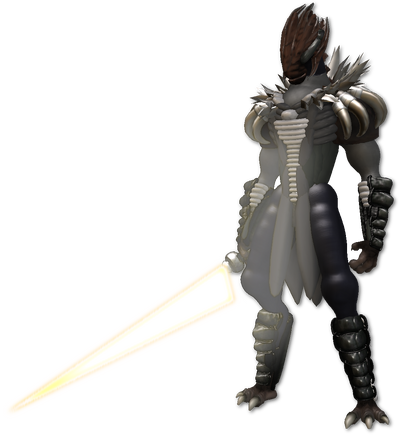 Nathorazakamaras Anthozovalatho, known more commonly as Kamaris is a knight of the Aldárae Order who currently resides within the Cyrannus Galaxy. Formerly one of the Colossi - a sect of religious warriors, Kamaris became disenchanted with the bureaucracy of the order and left to find a better path towards universal balance. Kamaris is one of the most well known Mahanayans of the First Gigaquadrant, having been a part of Vekaron's crew during the Ice Age. Unlike many Mahanayans, Kamaris has little reservation in being part of the wider Gigaquadrant. Nonetheless, Kamaris has a cryptic outlook upon the Gigaquadrant that through his travels has made him an entity of intrigue. 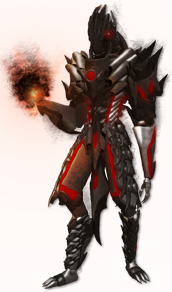 Hez'Kalka is the de jure leader of the Dominion of the Xhodocto. An intergalactic terrorist and a threat beyond normal measure, Hez'Kalka was pivotal in the creation of the Dominion of the Xhodocto and was an instrumental threat during the War of Ages and beyond, becoming the spiritual successor to Lord Zhuleshxi. Twisted by the doctrine of Angazhar, Hez'Kalka led a schismatic war against the Mahanayans that turned several towards the dark path of the Xhodocto, which led many Mahanayans to flee the Tuuros Galaxy towards Borealis. Hez'Kalka is an exceedingly powerful entity, having been gifted the divine power of destruction by Angazhar himself.

Siaokono is ancient mystic living in the distant reaches of the Tuuros Galaxy. Reaching the impossibly grand age of nearly nine thousand, Siaokono has lived through some of the worst calamities of the First Gigaquadrant yet has remained unchanged throughout. His grand age and experience in the Mahanayan way of life has made him almost shamanic in relation to the already shamanic Mahanayans, who believe that Siaokono is one who has spiritually transcended above them. 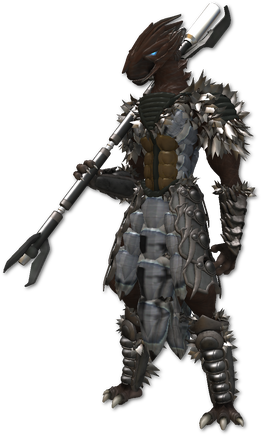 Mazarothas is one of the numerous operatives of the Centauran Defence. A relatively middle-aged Mahanayan, Mazarothas has lived in the turmoil of Tuuros for many years, and with the inception of the Centauran Defence, believed that a peacekeeping operation was key to his personal goals of self balance. Like many Mahanayans, Mazarothas is a formidable and unassuming entity that some have come to gravely underestimate.

“While I myself am inclined otherwise to believe the hordes of Mahayana entirely corrupt and of an outright... inhospitable disposition, the actions volatile and heinous undergone by their more controversial figureheads and the nigh-universal reputation of their unnecessary attitude may grant upon others... inaccurate beliefs.”

“I have only ever met a few "good" Mahanayans, and even then there are still none that I would want to consider myself a genuine fan of.”

“I have heard many good things said about the Mahanayan native to the Borealis States. The ones aligned with the Dominion? As can be expected... not so much.”