The Lizardian are bipedal reptillian creatures. Known to the Cyrandia Cluster as the founders and former rulers of the dreaded Imperial Alliance.

For years they plagued the Quadrants with their warmongering ways of living. Plundering and conquering area after area until they finally met their equal- Rambo Nation. They were the first to resist the Lizardians and in result two major wars were fought.

Sadly the Lizardians, as members of the Imperial Alliance lost both wars and after the death of their Emperor, the Lizardians scattered and seemed to have vanished from the Quadrants.

Their large and bulky build makes them a bit slow compared to other Quadrantia species, like the Rambo Serindia but their thick hides protects them from claws and bites.

The Lizardian, though not always the smart looking ones (some are a bit dumb) they are great industrials- capable of building a large warmachine in little time which proves their intelligence.

Another, yet less good reputation of the Lizardians are that they like to enslave races which they see as inferior and as carnivores- they are also known to eat their fallen enemies.

Below the Emperor was a War Council, various individuals with militairy ties who acted as advisors to the Emperor.

The Lizardians had no use for senators or ambassadors, and every notion or matter was given to the War Council to decide, a militarism culture the Lizadians were and for that reason most of the Lizardian people felt themselves safe and secure.

At an unknown planet the Lizardians evolved from small cells into their formidable size as they are currently. Even in their primal stages the Lizardians were territorial and hostile to anyone who got near them.

Over time the Lizardians managed to invent fire and the art of building until the point they finally formed a single goverment with the launch of their spaceships, the Lizardian Empire!

The Lizardian Empire grew to be a huge and violent Empire whom were conquering many species and conquering large areas of space within the Quadrants. When they launched their ships in 1152 BQF they soon conquered large areas of space in both Quadrant 82 and Quadrant 89, where they founded some great strongholds in the Unclaimed Territories of Q82, namely Lizardia and Ungul Lizar, while in the west of Q82 they constructed the massive dark planet of Impaerusqiantia- the Lizardian Capital of Quadrant 82.

The Lizardians gained a dangerous reputations during their campaigns, as they were known to eat their preys and defeated enemies were send to work in mines or worse. With their large territories (which were often only guarded by a small regiment) the Lizardian war machine was working over times with constructing ships, weapons and other technologies. During their time the Lizardians gained quite some enemies, with tensions with the Creckels, Xiaans and Hutters. They also gained some enemies in the Unclaimed Territories, though they were to weak and small to actually harm the Lizardian Empire.

Around 16 BQF when expanding their campaign in Quadrant 82, the Lizardians encountered Rambo Nation and started to invade their territories which would later become known as the Lizardian Threat. Under command of a notable Lizardian, the Lizardian Commander the Lizardians faced defeat for the first time and the Lizardians turned their attention to the members of the Noble Alliance. When the Hutters and Rambo made first contact, both sides were surprised that the Lizardians had a present in both Q82 and Q89 and allied eachother to face the Lizardians.

The Lizardians had to retreat from Koerband where the Rambo and their allied fleet overwhelmed the Lizardian fleet and forced them to retreat back to their territories. After the war somesort of truce was made which lasted from 03 BQF till 01 BQF as the other Alliance members needed to heal their wounds. The Lizardians disagreed and wished to launch another assault but the Galactic Emperor thought otherwise, and his Regent supported him as well, leaving the Lizardians with no choice but to accept the truce. During the truce the Alliance allied the Ruin Sector Alliance who also shared a hatred for the Rambo.

Luckily for the Lizardians the Second Galactic War broke out in 0 BQF and the Lizardians were found once again at the front lines. During the early stages of the war the remaining of the Noble Alliance was destroyed and the Lizardians, with aid of their Alliance members managed to conquer the Rambo Capital as well as the Xiaan and Hutter capitals. With the result the Lizardians did not need the Rambo Resistance anymore and attacked them. During the war many planets came under siege but with the formation of the emergency Quadrantia Federation the Rambo, Xiaan and Huttes stroke back at the Alliance. At the same time the Lizardians also invaded the Cyrannus Galaxy and attacked Capricaerón but were defeated. Suddenly the tide seemed to turn and with the Imperial fleet spread wide, the allied forces retook many systems and planets and the Imperial Alliance was forced once again to retreat.

Much to the anger of the Lizardians who felt uneasy with the two wars as their pride was greatly hurt as they lost two wars against the same enemies. The other members didn't care and began plotting once again, even aiding the United Lanat Empire and beginning to build a Clone Army- another thing the Lizardians didn't like. When the Imperial Alliance was creating superweapons they lost another battle during the Fornaeria Campgain which allowed the Rambo to grow even bigger. Bitter the Lizardians once again accepted their defeat. Later one, when Aur'Lodin killed the Emperor the Lizardians left the Imperial Alliance and went into hiding, leaving the other members behind confusion.

With the loss of the Imperial Alliance the Lizardians grew even more bitter and retreated to their various strongholds. Though many seemed to have vanished a few began to resettle at Ungul Lizar and Lizardia- while another individual known as Lizaconda joined the Confederacy of Allied Systems and proclaimed himself to be the last Lizardian in the Quadrants.

While at Lizardia the Lizardians slowly began rebuilding both Lizardia and Ungul Lizar- though the Lizardian numbers and dwindled greatly by the two wars. Under leadership of Lizaconda the Lizardian slowly managed to rebuild their might and glory, started reconstruction at Galvarus and expanded the Lizardian fleets with new class of vessels, including an upgraded light cruisers and stolen Ifrit-class star destroyers, once owned by Garlboz. After his defeat at Rambo hands, the Lizardians managed to steal most of the wreckages and began repairing and constructing the vessels themselves after studying its schematic details. However, Lizaconda's foreign policies and plans for his people brought the wrath and anger of powerful allies like Mortikran. Though with aid of his close friend, Lizrawn the Lizardian managed to steal the super star destroyer Infernal from the Rambo Capital, further strengthening their fleet capabilities.

Near the end of march in 08 AQF, their leader Lizaconda was killed at Galvarus shortly before the weapon was fired upon the Rambo Capital. The Lizardians were later involved in the Jatooine Incident, a peace summit between them and the Rambo Nation that turned into a disaster when one of their Ifrit-Class vessels was destroyed. In october of 20 AQF the Lizardians attempted to siege the Interdimensional Warp Gate during the Crossing Line-incident. The Hutters failed and retreated after the construct was destroyed by the Galactic Empire of Cyrannus. They did manage to tag away one of the disabled star destroyers belonging to the Hegemony. 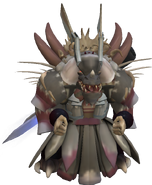 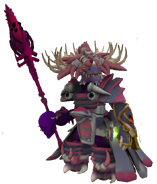 Some Png files migth require the Dark Injection and the CambenColor mods.

Because the Lizardian Empire was massive and strong, only their most prominent planets and colonies will be mentioned below.

Lizardia, a large purple colored planet filled with forests now acts as the Lizardian Capital. The large gate is the only entrance into the massive dark city, with spikes and massive towers Lizardia should be filled with life and production. The truth is sadly otherwise and some parts of the massive city have fallen into ruin due to the dwindled numbers of the Lizardians who cannot preserve the city with the low numbers of Lizardians.

Lizardia is protected by a Lizardian fleet at all times and is seen as the new capital of the Lizardian Empire. 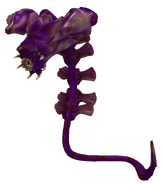 Lizardian Viper, the only native creature of Lizardia. Feared by even the Lizardians for their venomous bite- the Lizardians hunt these creatures to prove their honor and skill!

Ungul Lizar is small purple colored planet, housing the fortress and militairy outpost of Ungul Lizar. The large fortress has great walls and is difficult to reach due to it being build upon an island- only reachable by either air/sea or the lizardian made bridge. Heavily fortified and defended the fortress was once a great assest for the Lizardian Empire.

After the fall of the Imperial Alliance the planet became home to civilian Lizardians, protected by a small batallion of soldiers and a few ships.

Impaerusqiantia, the former capital of the Imperial Alliance within Quadrant 82. Heavily defended and untakable, the Quadrantia Federation was unable to conquer it during the Second Galactic War and stood for many years as a beacon of darkness and despair. This place was known to be the staging areas for all assaults within Quadrant 82. Around 03 AQF, the Imperial Alliance fell due to an internal betrayal and Rambo Nation, together with the Treaty of Fornaeria species managed to conquer the planet and it fell into the Nation her hands. Located close to Venotioa space, it has since become part of that sector.

The Lizardian still dream of the day to retake their former capital planet within Q82.

Over time, and with their membership of the Imperial Alliance the Lizardians returned after the fall of the Imperial Aliance with only a few ships. Though strong they began to duplicate them and improve the older designs with new shields and stronger weapons and as so remained a big threat to the Lizardian enemies. The Lizardians managed to get their hands on the abandoned Ifrit-class cruiser once owned by Garlboz, they soon produced the ships themselves and became a powerful asset in their rebuilding fleet.

“They are allowed to live besides us!”

“A foul and dangerous species they are!”

“In the past, they were a horrendous enemy to the free people of the Cyrandia Cluster. Now I wonder, are they able to change their old ways for the better?”