“The power of light is willed to them, and the forces of darkness fear them. They are embodiments of law and virtue, and there are truly none greater, both in divine power and in purity. ... Yes, there are those who proclaim our saviours as tyrants, yet without their righteous aid, what would become of us otherwise?”

The Bhāoskelodhros, widely known as the Light Drakes are one of the races of True Dragons of Koldenwelt, having dominion over the school of light and divinity magic of the Source. Among the most powerful of all dragons, being direct descendants of the first Fire Drakes and Sun Drakes, they are also one of the rarest races of dragons in the world, numbering only about a hundred. Noble but arrogant, possessing a black-and-white view of the world, the Light Drakes are powerful creatures who strive for good, but only their view of good.

Led by the malevolent Mentiryanth, the Light Drakes have been led into a philosophy where neutrality is not an option, with entities either being good or irredeemably evil. Because of it, they are considered stubborn and difficult to reason with, and consider all dark magic to be demonic and worthy of being destroyed, even if used for benevolent reasons. This behaviour did not stop certain races from revering their majesty, with nations such as the Hikamera Elves and the Sublime Chivalry of Aynach seeing the dragons as symbols of light and courage.

The Light Drakes predate recorded history, hailing from Koldenwelt's prehistoric times. It is said they were the outcome between the mating of Fire Drakes and Sun Drakes, two primordial dragon races of comparable power and scale in ancient times, but the wars between the dragon races and the Void Denizens who terrorized the world meant the deaths of many of the infant Light Drakes, leading their numbers to remain much smaller than those of their parents. While born as a race of immortals, the Light Drakes were stripped of their immortality by the dreaded demon Atrocius, who is credited for having killed and devoured countless of the dragons across the ages.

Following the end of the war against the Void, the extinction of the Sun Drakes and the cursing of the Fire Drakes, the Light Drakes, now numbered in mere dozens, secluded themselves at the Eastern Plains, around the area which currently serves as Lorchakim's lair. While some races such as Hikamera Elves and some humans have encountered the dragons and added them to their pantheons, they have purposely avoided contact with the outside world due to the actions of Mentiryanth, who has slowly turned the Light Drakes into arrogant and stubborn servants.

Light Drakes are very large sized draconic creatures with four legs and a pair of wings on their backs. Their heads have three pairs of horns and long crests which form a hair-like shape. Their feet have large claws and spikes can be seen at the the extremities of their wings. They also possess long, flexible tails. Light Drakes range from 90 to 100 meters in size upon reaching adulthood, which takes around 3,000 years to take place. At their chests, they have angelic symbols in the shape of feathered wings engraved in their scales.

Light Drakes are lawful creatures who wish to vanquish dark forces from the world by all means necessary. Despite being arguably considered "good", Light Drakes are extremists who are willing to cause destruction to fight dark forces. They do not understand the concept of neutrality and assume those who refuse to help them to be their enemies instead. Light Drakes are among the rarest breeds of True Dragons and can only be rarely found at the Eastern Plains.

Light Drakes are adepts at using light magic to fight dark magic users. They can use breaths of divine energy which take the form of huge rays of light coming out of their mouths, and their bodies radiate auras which are powerful enough to scare off dark creatures such as Lympharians or vampires. In physical terms, Light Drakes are said to be extremely strong, but are noted to having much less fortitude than other sapient dragons, meaning they cannot handle stress and are easily driven berserk or insane. 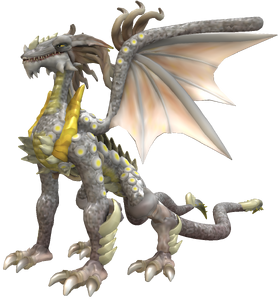 “I am the one law of this world. To oppose me is to oppose the light.”

Mentiryanth, the Queen of Radiance is the current leader of the Light Drake race. Currently the oldest surviving of the extremely few Light Drakes still alive at Koldenwelt, Mentiryanth claims to be a chosen one of the Light Colossus Lorchakim, though this is not actually true and she does it to take control of her people and make herself appear divine, and she would rather stomp Lorchakim under her and make herself the new Colossus of Light. 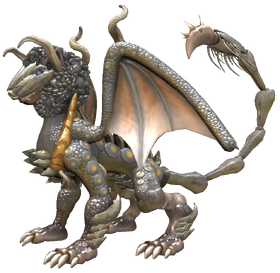 Dornmuunon is a vampiric beast who acts as the leader of the Manticores serving under the Nightshade Clan. An artificial being, he was created through the merging of the soul of a especially powerful Manticore and the soul of a Light Drake. Being born as a massive half-dragon monster, Dornmuunon can use all the powers of a Manticore, all the light-based powers of a Light Drake and has all the advantages of a vampire, making him a formidable enemy to whoever attempts to face him in combat.

“The only light I'm seeing is the light that's shining out of their asses.”

“One of the final connections I have to the past, a time before mortality stained the earth.”

“They proclaim themselves righteous. My righteousness is mankind.”

Retrieved from "https://spore.fandom.com/wiki/Creature:Light_Drake?oldid=804327"
Community content is available under CC-BY-SA unless otherwise noted.