“Do not let their brutish tendencies deceive you; much unlike the dreadful Varkorus, the Levarcor make for far better soldiers than mindless killers for it is not only their strength but their pleasantly surprising intellect which makes them so valued. ... Ooh, yes, the Levarcor make for good allies and even more potent enemies.”

The Levarcor are a species of tall, barbaric reptiles native of an unknown planet of the Borealis Galaxy's Demolidus Sector. Widely stereotyped as a race of unintelligent brutes, they are indeed a primitive species who has spent near the entirely of their history under the rule of Wranploer slavers, who used them as labour, warriors and cannon fodder by engineering their people into obedient thousands of years ago. Due to this, they are a race with little culture and independence, who in the modern days live either in the galaxy's poverty, under the rule of Wranploer remnants and space pirates or under the Niaka Special Forces and the Empire of the Murgur, who are attempting to civilize them.

Well known for their great strength and numbers, the Levarcor have left their mark on Borealis. Seen either as a plague to be destroyed or as one of the greatest victims of the terrors of piracy, their people are met with all kinds of reactions. Their engineering have made them a people without a name of their own, and they remain living solely under the rule of others.

The origins of the Levarcor race have been lost thousands of years in the past. What is known about them is that their homeworld at the Eastern Arm was conquered and enslaved by the Wranploer, who decided to use the Levarcor as slaves due to their robust and strong bodies. Before they, they were assumed to be a barely tribal race in terms of culture. In order to turn them into the perfect cannon fodder, the Wranploer used biological and psychological engineering to make them completely obedient and be born knowing all that was needed for war, in order to remove the need to teach them altogether. Over the years, many Levarcor ended up in Murgur territory, where they were absorbed into many Murgur Warbands over the years, and they have also seen often working alongside the Varkorus due to their similarly brutish cultures. In the modern days, many Levarcor still live under the Murgur, while a large number was taken by the Niaka Special Forces who seeks to educate their people and turn them into defenders of the Polar Crystal Alliance.

Levarcor are large sized, fairly humanoid dinosaurid creatures. Their skin is a radiant orange in colour for males and a cream colouration for females. They possess four pairs of horns coming out of several points of their heads, these horns being larger for males. Their muscles are incredibly defined and their claws are very large. Levarcor also have a very long tail which can grow to over three meters in length. Males of the species often grow a 'beard' as they get older made out of bony-like plates rather than actual hair.

Being forcefully uplifted by the Wranploer, the Levarcor have no proper culture or society. They have been engineered to know how to operate machinery and weaponry from birth and to obey whoever is their "owner" without questions. Levarcor are incredibly stubborn creatures and are prone to tantrums or berserking states if irritated enough. Despite their stereotype of being dumb creatures, Levarcor can actually learn things much quicker than most Borealis races in order to easily adapt to enemy tactics. As they get older, Levarcor become far more civilized and eloquent, though the average lifespan of Levarcor is extremely low.

Levarcor are brutish and fight their enemies with their incredible physical strength, which while not as strong as a Zoles, allows them to take on most other Borealis natives. Levarcor breed extremely fast and abuse their numbers when fighting enemies. In addition to punches and claws, Levarcor can also charge at their enemies to hit them with their horns, which can easily pierce unarmored targets. Levarcor also grow in size, power and intelligence as they get older, this power reaching its peak at the last hundred years of the Levarcor's life. Levarcor who reach this state are known as Elder Levarcor and are larger and more powerful than even adult Cold Loron. 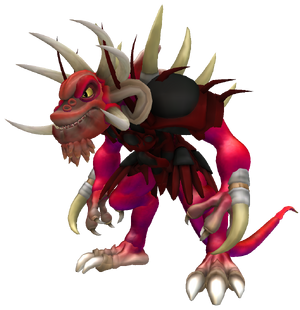 “You all make the same mistake. You all think we Levarcor are idiotic brutes. I will make you eat your words, and your own hands while we're at it.”

Brakarion Gragon was an Elder Levarcor who served as the internal leader of Dark Grip. Formerly a captain of the Borealis Consortium Network, Brakarion was found by Torrent and offered a position of power for his battle and leadership skills. Tremendous large, at 25 meters in height, Brakarion was the largest Levarcor ever recorded. It was implied that he was the result of a discontinued experiment of creating an army of titanic-sized Levarcor by the old Wranploer Legion which failed for unknown reasons. Strong and intelligent, Brakarion led Dark Grip with fervent loyalty toward the Warlord who made him possibly the most powerful Levarcor of all time. 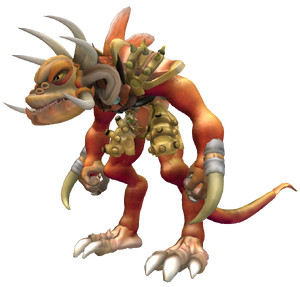 “I was made for the sole purpose of killing. And I will do just that.”

Lirtelta is a bioengineered Levarcor created by scientists working for Soltako Armed Military, in what was speculated to be an attempt to create more Levarcor like Brakarion Gragon. Before she could be used by the PMC, Lirtelta was rescued by Tetra and his team and then taken to his ship, where she now serves under the Penumbran. Lirtelta knows how to fight and kill from birth, but when not on combat, her actual knowledge of the world around her is still very limited.

“Cannon fodder. Nothing else to say.”

“Completely agreed with Volim; they're a bunch of useful idiots who make up a pretty strong infantry in our forces.”

“I've lost count on how many Levarcor I've killed over the decades. I'd estimate over two thousand, very easily... Not that I'm too proud of it. Poor things are engineered to die for others.” 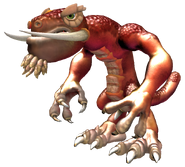