Legatus
The Laregian are an ethnic group native to the planet Lareg within the Space in Between. Descendants of human explorers from Earth, the Laregian can be considered part of Humanity. The Laregian are known for their involvement with casino's, gamblings and the use and toloration of recreational drugs to enchance the senses for pleasure.

Common to all humans, the Laregian human body consists of the legs, the torso, the arms, the neck, and the head. The most commonly defined body systems in humans are the nervous, the cardiovascular, the circulatory, the digestive, the endocrine, the immune, the integumentary, the lymphatic, the musculoskeletal, the reproductive, the respiratory, and the urinary system.

One difference with other ape creatures on Earth is that humans have a far faster and more accurate throw than other animals. Humans are also among the best long-distance runners in the animal kingdom, but slower over short distances. Humans' thinner body hair and more productive sweat glands help avoid heat exhaustion while running for long distances.

The Laregian are well known for their lavish and modern looking clothing and robes, golden decorations and brigh colors used within their attire. Most Laregians viewd other humans or humanoids as less sophisticated then themselves, often making them a bit snobbish and arrogant to others.

Like all Humans, the Laregians are part of Humanity and have their evolution origins on the planet Earth, a planet within the Milky Way Galaxy. The early records indicate that human settlers arrived in the year 2500 (400 BQF) at Lareg and made a small outpost at the lush planet. Over the following hundred of years the now native humans, whom identified themselves as Laregian expanded their settlement until it became a thriving metropolis known for its skyscrapers and houses of pleasure and toloration of rcreational drugs like spice.

The Laregian are the founders of two major companies within the Cyrandia Cluster, the shipyard construction facility known as Ekimu Enterprises and the entertainment Vexo Club.

By 2820, the Laregian joined the Legatus, an Imperial Remnant and became one of their most influential and common species within that Kingdom, many serving in influential position in both the political system and the military.

The following planets are mostly associated with the Laregian or have a majority of the species inhabiting the planet. 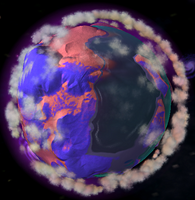