“You would not last a second against a Kvargo. I am proof of that.”

The Kvargo are an extinct species of the Borealis Galaxy, notable for once serving as one of the largest military powers of the Arm of Wildness.

The Kvargo are a species hailing from planet Biavumd, located at the Vijaha Sector of the Borealis Galaxy. They evolved a militaristic and authoritarian government, calling themselves the Kvargo Empire when they achieved space travel 12,000 years ago. Once they began expanding through their space, they eventually met the Wranploer and, due to their similarities, the two species became allies instead of fighting. The Kvargo Empire would grow to become the second largest civilization of the Vijaha Sector after the Wranploer's own empire, and soon they began increasing their influence across the galaxy, creating animosity with the Zoles Imperium and the Republic of Heleanor in the process. When the First Borealis Galactic War happened, the Kvargo joined forces with the Wranploer on their scheme of galactic domination until they were wiped out by the Zoles Imperium. The only known survivor of the Kvargo race after this was Torrent, who was cryogenically frozen and only awoken centuries later though he would later be killed several years after being awakened.

Kvargo were fish creatures of imposing appearance. They were humanoids in build, with an immense frame and a shark-like head. They had large, cat-like eyes and many rows of fanged teeth, as well as a large fin on top of their heads. They possessed distinct red, blue and yellow scales across their bodies, and fins which went from their necks all the way to their tails. Females and males of the species were virtually identical in appearance, showing no form of dimorphism.

Since their early days, the Kvargo were always aggressive and uncaring creatures. They were known to be selfish and strict, with the Wranploer being the only known race to ever gain their trust. Kvargo were also famous for their sheer determination, and would keep fighting their enemies even if death was certain. There are no records of battles against Kvargo Empire armies which include the Kvargo army retreating to any extent.

The Kvargo were physically impressive creatures, being marginally stronger than the Zoles in strength. Their fists were covered by a natural thick layer of bony-like material which served as a natural glove of sorts, which allowed the Kvargo's punches to hit enemies extremely hard. In addition, their heads were protected with a similar material, which allowed them to charge and headbutt their enemies to inflict damage. Despite their sizes and frames, the Kvargo still had some agility and could keep up with smaller targets. 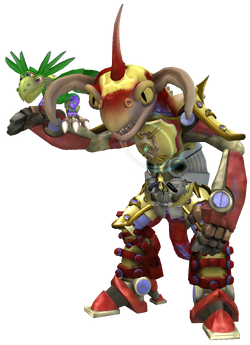 “I'll bring you back to glory, you wanting it or not.”

Jekrad mil Torrent was the last living Kvargo and served as the founder and leader of the New Wranploer Legion. Formerly the right-hand man of General Volim, Torrent wished to recreate the Wranploer's empire through all means necessary, so that he could created his own legacy where Volim failed. And like Volim before him, he failed.

“While a race now spoiled by the deeds of its last survivor, the outright extermination is... questionable. I find myself perhaps pitying them, or what remains of them at least.”

“The Zoles have a mistake to rectify - one of their enemies still lives.”