“Our people have suffered enough.”

The Krektal are an extremely young race of Borealis Galaxy and a member of the Polar Crystal Alliance.

The Krektal evolved on the lush world of Gotla, evolving a comparably human-like society. They achieved space-travel in the earlier years of the Second Borealis Galactic War, where they colonized Gotla's moon and the other planets of their solar system, and some time later discovered the existence of the Cold Relays. However, the Borealis Consortium Network's interests arrived to their territory and through their orders, a proxy war was launched on the Krektal and they were attacked by Soltako Armed Military and their leader, Zoltik Relkhul. The attack resulted in the Krektal's barely spacefaring empire being eradicated, and their species was left without a homeworld. The Polar Crystal Alliance came to their aid and offered Hyperborea as a replacement homeworld until a new one could be found, while other Krektal surrendered to Soltako and joined its ranks.

Krektal are human-sized mammalian creatures displaying traits of multiple species. Their heads can be compared to those of horses and possess a pair of eyes and two pairs of long, tube-shaped ears. Their bodies resemble those of small Terran bears with sleek, clawed fingers and a distinct yellow, brown and white skin. Krektal possess long tails and minor sexual dimorphism, with females having a lighter fur tone than males.

Due to what they went through since their first contact with aliens, the Krektal have become timid creatures who are reluctant to make contact with other races. The species collectively became submissive and lost its pride after being stripped of their homeworld by Soltako Armed Military, though the Krektal are capable warriors on their own right and will not back down if forced to fight. The Krektal are young, but should not be underestimated.

The Krektal are agile creatures with physical strength comparable to that of humans. Their senses of smell and hearing are noticeably efficient, with Krektal being able to smell or hear other individuals from about 600 meters away. If forced to fight in melee range, Krektal can make use of their sharp claws to strike and stab their enemies. Their average build and strength make them meek compared to most of Borealis' other inhabitants, though the Krektal can maneuver themselves very fast, be in land or through the air by using jetpacks, allowing them to fight toe-to-toe with many alien races. 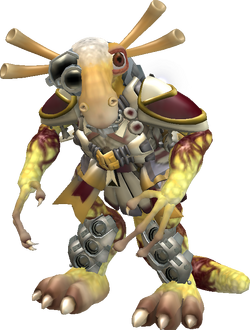 “Somebody needs to take a stand. I might not be the right guy to do so, but somebody has to.”

Tetra is the thirty-eighth member of the Penumbra Unit and is, currently, the only Krektal member. Hailing from Gotla, the now-uninhabitable homeworld of the Krektal, Tetra was a respected Lieutenant-Captain of the 22nd Goer'tna Protection Legion until the day that the Borealis Consortium Network pushed his people to near extinction. Tetra, despite his age, has gone through many life experiences that has hardened him and prepared him for war, although he still retains a modest, even shy, attitude towards others. 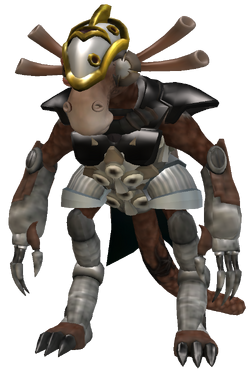 Nirta Nenra is a Krektal traitor who served as the head of the Soltako Armed Military's northern influence and used to be one of Zoltik Relkhul's direct lieutenants before his death. Nirta surrendered to Soltako when they invaded the Krektal homeworld of Gotla, and due to him, many Krektal survived and became members of the private military company. He was notably Tetra's caretaker and mentor at some point of his life.

“They have macaroni on their heads! Hee hee hee!”