Kralgon AI Weapons, also known as unmanned vessels/vehicles were used by the New Kralgon Empire and Unified Nation of Ottzello.

Since they are unmanned, they can perform complex hi-speed manoeuvres that standard vehicles cant, use several weapons at once, target enemies a lot quicker and not risking the crew's death (with the exception of spaceships transporting armies, although Kralgon ships rarely need to transport armies these days).

In UNO, they are often used for spearheading attacks.

The following will describe common elements/characteristics of AI weapons:

The Crushers are the big brothers of the Walkers; they are lower in quantity, but much stronger and tougher. While Walkers are restricted to long range weapons, the Crushers have incredibly strong fists in addition.

The Land Weapons double as both artillery and incredibly fast vehicles. Their cannons, when deployed, can be used as railguns, antimatter shells, or anti-aircraft batteries, meaning they can cover any combat situation. Their sped can run over enemies, or simply cut huge forces of infantry apart with missile launchers; the velocity of them driving towards the force at full speed is enough to intimidate and tear apart enemy forces. 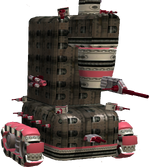 The Land Destructors are the ultimate land vehicle. With their dozens of machine guns taking out infantry, their antimatter shells destroying vehicles, buildings and infantry alike, and their railguns aiming at anything, the Land Destructors are unstoppable. Their AA weapons can take out aircraft, too. When they move towards an enemy, the sheer sight of a huge vehicle signifies death to any soldier.

Killships are the most numerous type of spaceship in the Kralgon fleet. They are UFOs, in appearance and function, although they double up as deadly battleships. They can employ incredibly powerful space combat weaponry, such as antimatter missiles.

The Kralgon Obliterator is a deadly AI weapon. A huge warships, it has very deadly weaponry, and is used as a capital ship in UNO, alongside the UNO Warship and Tralkik Destructor. They are deadly it both space combat and orbital bombardment.