“Hahahaha. I can merely laugh at your foolishness for believing the end of the Chosen meant the end of Borealis's infernal retribution. Our allies have lived across your stars for eons before even we were born... and their hungry gazes stare more and more intensely at your precious civilizations each passing day. No matter how you fight it, your fate is already sealed.”

The Kondrakar were a species of immense limbed serpents natives of Planet Kondrak, located at the Muvogura Sector of the Borealis Galaxy. A malign and cruel race, they are influential members of the Dominion of the Xhodocto as well as its most numerous members in their home galaxy, having since ancient times thrived under the gaze of Diafthora, one of the seven Xhodocto Eyes.

The Kondrakar were at one point rulers of most of the galaxy's Eastern Arm under their Kondrakar Dominion, though they were eventually weakened by their old enemies and forced into seclusion. However, the rise of the Dominion of the Xhodocto encouraged the Kondrakar to let themselves be known once again, leading them to wage war against Borealis once more during the War of the Ancient Three.

The Kondrakar were among the oldest modern space-faring races of Borealis. While their exact origins are not known, they are speculated to be space-faring for over 1,200,000 years, easily predating all modern races. A common theory is that they were creations of the Xhodocto Eye Diafthora, or at the very least it aided in their evolution. Formerly the rulers of the Eastern Arm, they shared the title of leadership over the galaxy with the Rovegar Matriarchy and the Ganthorea, and after numerous wars between the three powers, the Kondrakar secluded themselves to their homesector of Muvogura, where they reigned as the sole masters of the region. Over the next thousands of years, the Kondrakar watched the rest of the galaxy in curiosity, but never attempted to intervene in it again for unknown reasons while their legacy and ruins were either destroyed by time or managed to thrive, including artificial races such as the Hseraelna.

Following the events of the War of Ages, many Kondrakar forces were sent to outside Borealis to settle in other galaxies. As they did, they encountered like-minded races such as the Mahanayans and became members of the Congregation. Meanwhile, the Kondrakar's territory on Borealis began being threatened by the Junction, who began advancing toward the region. During this time, the Drakodominatus Tyranny obtained Kordrakar genetic material, which allowed them to create Pathogis and his servants. When the Congregation was reformed into the Dominion of the Xhodocto, the Kondrakar's power only grew, and the technology of the Dominion has allowed them to fight against the Junction on equal terms.

The War of the Ancient Three saw the Kondrakar Dominion waging full war against the Polar Crystal Alliance, after having watched them destroy their ancient Ganthorea enemies. Ultimately, however, the Dominion was destroyed and the Kondrakar were driven to extinction, but not before leaving a permanent mark upon their galaxy; using demonic energy, they sacrificed their souls to create the Eternal Wound, a monstrous wormhole forever linking Borealis to the Nightmare Region.

Kondrakar were serpentine creatures with four limbs, two serving as arms and two serving as stingers. When adults, Kondrakar ranged from 8 to 9 meter long, standing at average 4,2 meters tall, not counting horns. Kondrakar skeletons were made of very flexible material which allowed them to bend their bones into various ways. Their horns were made of the same material and could bend the same way, allowing a Kondrakar to lower its horns to decrease its size. Despite not having legs, Kondrakar could sprint at very fast speeds to charge at their enemies by propelling themselves forward. They were also excellent swimmers, moving underwater in a similar way to Terran sea snakes.

Kondrakar were deceitful and zealous creatures, dedicated only to fulfilling the will of Diafthora, and later the Corruptus by extension. They saw themselves as the only righteous owners of Borealis and showed rampant xenophobia toward outsiders. The Rovegar and the Ganthoreans were their most hated enemies, who they saw as annoyingly persistent obstacles in their path to ultimate victory.

Kondrakar were very strong creatures who could move at high speeds and evade attacks with great agility. Their main form of combat involved headbutting their enemies, changing the position of their horns to stab and then slam their skulls against the victim. In addition, they also possessed a powerful poison which they injected at their victims through the stingers on their back limbs. These stingers were strong enough to stab through most light armor, and this poison, while not acidic, traveled fast through the bloodstream of the victim and caused extreme pain and paralysis, leaving them immobilized. 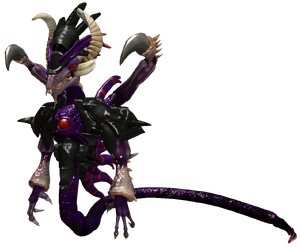 “Perish in the name of the gods!”

Lord-Padre Maknagrius was a descended Kondrakar who served as the ruler of the Kondrakar Dominion and as the highest authority of the Dominion of the Xhodocto in the Borealis Galaxy. An immensely old entity dating from before the birth of the galaxy's modern inhabitants, Maknagrius was once the ruler of the Eastern Arm until he was weakened by the efforts of the Rovegar and the Ganthorea, though after becoming a demon lord of his own right under the Xhodocto Dominion, he had become more powerful than ever. 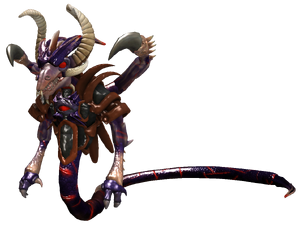 Pathogis was the Kondrakar template of the Phantoms of Pathogis, one of the Overseer legions of the Drakodominatus Tyranny. By nature, Pathogis was deceitful and sadistic. Whenever possible, he would cheat his way to victory, being indifferent to the consequences of his actions. Pathogis looked down on most other beings, with the exception of his Dominatus masters, and considered them little more than distractions. Pathogis had a love-hate relationship with the other Overseers, often mistreating or backstabbing them for pure amusement. Overall, he showed great disdain toward others, except those who could prove themselves to him.

“Nothing but a waste of intelligence, they chose to condemn themselves to servitude and for that I have no sympathy for them”

“They prove useful to the cause. Our cause.”

“They will prove most useful in the conflict to come.”