“Non-threatening in nature. Lives predominantly from hunting and gathering. Traces of agriculture have been noticed as well as animal husbandry. Contact with colonists was originally met with hostility, but they have since adapted to our presence. Tribal unification by Chieftain Xermilin is speculated to lead to the individuals of the region to develop writing in the following centuries.”

The Klamb are a species of pre-spacefaring, tribal canines natives of Planet Klambah, located at the Milky Way Galaxy. A race who lives in small communities and makes use of rudimentary tools, not yet having invented writing, the Klamb are subject of study of the Dracogonarious, who have colonized their homeworld and studied their behaviour for the last few hundred years. The Klamb eventually met the aliens and have since considered them merely another race of their land, who somehow came from the stars.

A deeply spiritual people, the Klamb have been visited by the Thoi'olerthae through their history, with one of their leaders eventually becoming one of the destined chosen of Essential deity Sonhadromerith. The Klamb are speculated by Dracogonarious scientists to eventually grow into a developed society in the next hundred years, and they hope that eventually, the canines will become important members of the galactic community as well as members of the Indoctrinate Collective.

The Klamb began creating tribes at their homeworld of Klambah at around 7,000 years ago. Creating small settlements to house each tribe, the Klamb remained mostly divided between themselves. The largest tribe, located near the shores of the continent's ocean, was led by the Xermilin family. Around 5,500 years ago, Macin Xermilin was born and eventually became the ruler of the tribe, concentrating her efforts in uniting the tribes under a single government, and was eventually visited by Thea'Nhirara, who gave her Dream Energy. Macin's tribe became known across the tribes as the ones blessed by the "Angel Shaman".

The Dracogonarious Empire eventually colonized Klambah and decided to study the Klamb, unlike most space-faring nations who would rather destroy the tribes of the planet. At first hostile, the Klamb learned to tolerate the Dracogonarious as they did not mean harm to them. Macin Xermilin hopes that one day, her people join the Dracogonarious and the rest of the "sky people". During the Annihilation, Klambah was attacked by the Desolation Hivemind and the Klamb Tribes suffered heavy losses, until Macin Xermilin managed to ward the demons off. As of now, the Klamb are under the supervision of the Indoctrinate Collective. 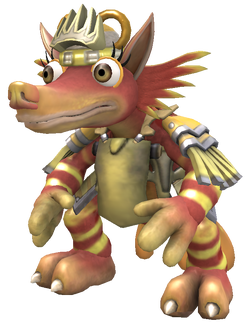 Klamb are human-sized, mammalian creatures with vaguely dog-like traits. Their fur is red or light pink, depending of their sex, with yellow-coloured stripes on their limbs. Their heads resemble terran canines, having a long snout with a wet nose and several sharp teeth. They have a pair of large ears and a furry crest next to them which can grow to impressive sizes as they get older. They possess three tails, all of them being rather small and stubby. Males grow sharp claws on her hands, which females lack.

Being tribal, the Klamb's culture is simple. They are friendly and very spiritual creatures with a deep bond with nature. Klamb enjoy singing and dancing around fireplaces as a way to keep their tribes united, and believe heavily on the concept of teamwork. They are religious creatures who worship Thea'Nhirara, who they call "Angel Shaman", as their main goddess. Males are sent to do dangerous tasks such as hunting, while females stay on tribes to take care of them and their children. The Klamb may occasionally howl to seek attention or weep like a dog when sad.

The Klamb have around the same strength as a human being, if not weaker. However, the males of the species are evolved to be the fighters, and develop long, sharp claws and teeth to fight off their enemies. They can use their howls to scare and intimidate the wildlife of their homeworld to keep them away from their tribes, and have also domesticated their own beasts for battle. The Klamb are very dexterous, especially the females, and can fight by using tribal axes or spears. 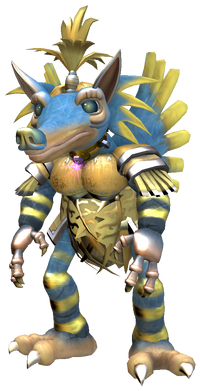 “We fight together, we prosper together.”

Macin Xermilin was the elderly leader of the Klamb and one of the most notable Dream Energy masters known. She was one of Thea'Nhirara's students and lived for over 5,000 years before she died during the Third Xhodocto War.

Macin was a friendly elder, but when teaching about the powers of the Dream Energy, she became extremely serious and authoritary. Macin was known to have little patience toward failure and tended to punish her students if they did, though this was a way she got to train them further. Macin's training involved bringing her students to their extremes until they realized she was doing it and confronted her about it, where she would then declare the training a success. Being an old tribal woman, Macin was prone to being cranky and didn't actually have much knowledge about science. She was known to be afraid of heights, and had demonstrated an intense fear of the Desolation Hivemind following their appearence at Klambah.

“There is something really unnerving in them.”

“I have seen documentaries about these guys on shows while living with Baptarion. They're a kind race from what I've seen, although some of their more... traditional practices are a bit too strange for me.” 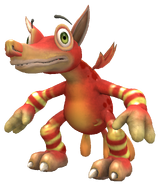