“I doubt they were always slug-like in appearance in the distant past, before whatever caused them to found the Junction happened. I imagine they were once creatures of great size, perhaps arthropod in biology and with several pairs of limbs and tails. But this does nothing but make me wonder what were they thinking to turn themselves into... these. Is this really what they see as a perfect form? I get the feeling they have done a terrible mistake but are too proud, or perhaps mindless, to admit it.”

The Jnh'arv'nazale'ver, most known across the First Gigaquadrant as the Junction Mind are a race of slug-like, near featureless creatures who serve as the masterminds behind the Universal Junction of Species and are widely assumed to be the original species responsible for the same's creation. Tremendously ancient, hailing from the alternate universe they call Dimension Zero, the Junction Mind is a dreaded force who leads a path of conquest and domination across reality, assimilating alien technology to their own in order to become the most powerful and advanced force possible.

Their intentions are ambiguous at best, as no race has ever discovered the reason for the Junction Mind's great hunger for technology, and many assume they are merely single-minded, barbaric creatures who seek to destroy all life. While their single-minded behaviour is not wrong, the Junction Mind has proven to be far more complicated than their meek bodies may indicate, and once they put their metaphorical eyes on something they may want, nothing short of annihilation will stop them from obtaining it.

Natives of the alternate universe known as Dimension Zero, the Junction Mind are reported to have conquered its entirely about a billion years after the founding of the Junction. Their past is a mystery, though researchers across the Gigaquadrant have studied them and what little data has been recovered about their biology, with many concluding their current form is a result of brutal self-experimentation. The reason for the Junction Mind's transition into vermin-like creatures of fragile constitution is as mysterious as their origins, with no logical answer being discovered so far.

In recent times, the Junction Minds who survived the Annihilation went to reside the Grim Reaper Sector of the Borealis Galaxy, where they seemingly studied the activity of the First Gigaquadrant while maintaining their borders. An indeterminate time between the end of Attero Dominatus and the War of the Ancient Three, the Junction Mind took their mighty empire and departed from the Onuris Universe altogether, seemingly moving on to easier grounds to conquer.

Studies made from samples of the Junction Mind's DNA have shown they have a comparable structure to arthropod aliens, which has made many researches assume they were once a race of insectoids, perhaps similar in appearance to termites or wasps, with several pairs of limbs and at least two tails. However, the current appearance of the race is that of large, pudgy, slug-like mollusks with a black and red coloured, moist-looking skin. They possess no skeleton and the only feature present in their exterior is a single orifice on their fronts which holds a very large, bulbous tongue. Junction Minds have no other features, including eyes, noses, limbs or any other orifices, and it is unknown what they eat for sustenance and what happens to said food once inside their organisms. All Junction Minds have identical genetic structure, causing many to believe they are all genderless clones of each other.

The Junction Mind is often described as single-minded and hostile due to their unbroken will, which results in them removing all obstacles on their way by all means necessary, being not afraid to use force. They are generally unwelcoming to creatures not identified as being their drones and will often kill them on sight in order to minimize potential threats. They are noted for not appearing to have an hierarchical structure or individuality, instead being a collective consciousness which drives the entire species for the same goals. The Junction Mind does not appear to have the concept of grudges or friendships, and their relations with alien governments are all based on whether they are threats, if they should be assimilated or if they are more useful left alone for the time being. Nevertheless, alliances with the Junction Mind are usually short-lived for if they deem a species useful and beneficial, they will want them under their complete control at some point.

A Junction Mind is extremely fragile, especially if not protected by a suit of armor. Their only method of locomotion is by hovering, done by using their great psychic powers, and they appear to not even be able to crawl across the ground due to the shape of their bodies. The Junction Mind's psychic powers are potent enough to bend advanced alloys, including the ones made by them, with little difficulty and their sheer presence is enough to make certain races, such as humans, find their heads bursting. The long tongue of a Junction Mind is often used to penetrate the orifices of other races, often the area where the brain is located so that they can reach it and presumably feed from it, with some researchers believing the Mind has the ability of learning their victims' knowledge and memories this way. The Junction Mind's power is too potent to be affected by most EMPs, though they are known to have an aversion for Essence, as it causes their powers to be disrupted and potentially nullified. Nullifying a Junction Mind's psychic powers causes it to become completely catatonic until it recovers.

“I have only ever heard a few things about these Junction people, and surprisingly, none of those things are nice. How any people could do that sorta thing to themselves is beyond me, but perhaps... Perhaps it's best if I don't find out...”

“Our galaxy is home to many types of people that thrive on violence; bandits, outlaws, conquerors, soldiers, warriors, the like. However, not once - either in the history of my people or others - were we subjected to the experience of a paranoid delusion of something as frightening as the Junction prior to their arrival. They are not welcome here. They are not welcome in our home.”

“I would undertake action against them. Only if the other councillors knew of what they were, and if Borealis as a galaxy were ready to do such. As far as I can understand, only the Xhodocto are ready to do that...and they're perfectly content with watching Borealis crumble if the masterminds behind the Junction have their way. Borealis is as dangerous as it has ever been.” 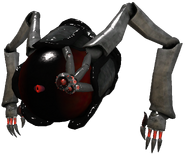 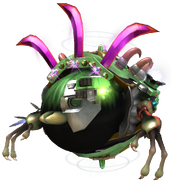 First model of the Junction Mind