Jovar, the Proud Warriors of the Milky Way

The Jovar are a carnivorous, four-legged and no armed creature in the Milky Way Galaxy. They are fierce warriors who tend to show little mercy to other empires. Their home planet is Jora. 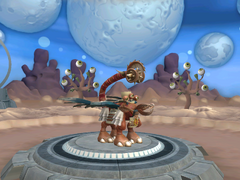 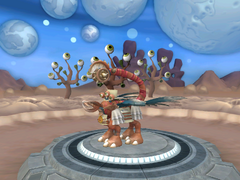 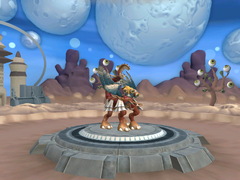 In general, males are the stereotypical image that pops into one's head when the word "Jovar" is spoken. Because of this, it is important to note that this section lists aesthetic differences between males and females.

For one, females tend to be smaller and skinner, however they do sport a wider hip than males. Females also lack the club-like appendage on their tales, and the frontal talons, feet, and bone-covered mouths are typically smaller than those on males. Females also have smaller mandibles and shorter tails. Female wings are smaller, and tend to stand more erect in relation to the body than those of their male counterparts. Finally, a large gold streak can be found on all females, reaching from the top of their tale to the gluteus maximus.

From a social aspect, despite the militarism so commonly found among the Jovar throughout their history, females have usually had equal rights and suffrage when compared to males. Though encouraged to stay at the home and watch the household and family, females have always been permitted to serve in more masculine careers, even in the military. Few females, however, have attained any noteworthy status within the military (though there are exceptions).

Jovar have two ways of speaking: in a series of clicks and chirps (similar to Grimbolsaurians) AND by vocal speech, similar to most species. This is only possible because of the two mouths that Jovar have. Most prefer to use their more natural clicking speech to talk to one another. However, Jovar will speak with vocal cords to other alien races most of the time, despite its uncomfortability to a Jovar. Thanks to this natural gift, Jovar are usually chosen to serve as translators for inter-species affairs, especially those dealing between vocular and mandibular speech.

The vast majority of Jovar species members retain on them the most commonly known coat of orange with red stripes and blue wings; however, this is not the only fur variation. There are several others, and while they are generally accepted by Jovar society, racial issues have plagued these minorities in the past. 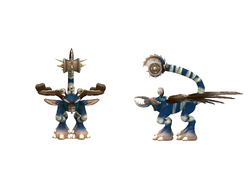 The most common "variant", they still retain only about 7% of the total Jovar population. Luckily for them, they have suffered through little persecution throughout the years and benefit from equal rights and suffrage among the "majority". They are said to have originated from the now-nonexistent Joran polar ice caps. 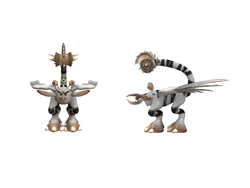 These white and black members of the Jovar race come naturally through only rare genetic mutations. Throughout the years, they have suffered far greater persecution than most other variants, and some are rumored to have escaped both the JPA and JSR in order to find ultimate peace and acceptance, in previously unexplored sectors of the Milky Way...
Add a photo to this gallery

Because they accidentally discovered their true origins on Hgor, most Jovar choose not to follow any religion (though many follow monotheistic relgions of humans, such as Christianity or Judaism). However, a very small group of Jovar have decided to join the Sylit faith (Eterfiammatheism) thanks to Sylit missionaries throughout the Empire.

Retrieved from "https://spore.fandom.com/wiki/Creature:Jovar?oldid=781935"
Community content is available under CC-BY-SA unless otherwise noted.