300+ Years, unless killed by unnatural causes

“We do not tolerate deceit”


The Icolian are a mysterious and advanced civilization within the Cyrandia Cluster, originating from Quadrant 21. Inhabiting an area in the south-west of the Quadrant, the Icolian are living in almost complete isolation and are notable for being extremely xenophobic and aggressive nature.

Yet the Icolian are well aware of many events within the Cluster, having an obscure interest in temporal matters.

The Icolian are a xenophobic and aggressive species by nature. Having traits of a non-humanoid hermaphroditic race with a likeness for precision and an obscure interest in temporal matters. Icolians are approximately the same heights at humanoids, measering from 1.80 meters - 2.20 meters. They have a red/orange colored skin, which represents their flaming and agressive spirits.

The Icolian use six legs, that makes them possible to move in any direction at an unnatural speed and movement. The Icolian have two arms with dangerous pincers- which they can use to either stab their enemies or lift up objects. Their large head contains a large brain, allowing them to use telepathic abilities, mostly in the way of mindreading and communication. This allows them to contact others of their species or influance the weaker among their enemies (humanoids seem extremeley vulnrable to it). As such the Icolian have somesort of hivemind with eachother. Their telepathic abilities allow them to control their vessels with a mere thought instead of using controls like most other species.

The Icolian can stand against extreme temperaturs (up to 450 degree Celcius) but seem to dislike cold weather environments which makes them weak and unable to move, giving them a slow and painful dead.

Icolian are known to venture beyond their changing borders (-their borders seem to change every few weeks, a sort of rotation wich often leads to conflicts with none understanding races). The Icolian, due to their xenophobic nature have an intrinsic distrust of alien species, often finding other alien species distasteful to interact. When in conflict and conquering areas (a rarity) they do not take prisoners unless for experiments or scientific examinations. Those who ever met an Icolian in person often find them scary of intimidating.

When making truces or treaties with alien species, the Icolian have a long list of principles and rules, and do not tolerate deceit wich will immedate lead to the breaking of the treaties and a swift return to hostilities.

Throughout their history the Icolians remained in isolation, and as such not much is known about them. Though some believe the Icolian were already in space since early 4800 BQF. Yet their xenophobic way of living made them unknown to the rest of the Quadrants, attacking anyone who tresspasses their borders without mercy.

Well before the events of the Second Galactic War the Icolians in secret found a wormhole in Quadrant 82- leading to the so called Odysseia region. The Icolian soon settled themselves on a planet known as Icolia, and became their main planet in the Cyrannus Galaxy. Over time however, somesort of split occured, and the Icolian of Cyrannus formed their own goverment- known as the Icolian Assemblage. It soon turned out the Cyrannian and Quadrantian Icolians are united in a way similar to the Neraida Gigamatrix- though both sides have their own motives and sometimes even work against eachother. The Quadrantian Icolian began constructing their space stations in the Odysseia region, where the boundaries between realities is very small, allowing the Icolians to freely travel between dimension and even monitor and travel to alternate timelines.

When Rambo Nation arrived in Quadrant 21 they did not encounter the Icolian until one of their ships tresspassed Icolian territory and was destroyed. The ship travelled far off the Southern Trade Route, passing near Icolian space and as such was destroyed. Diplomatic efforts first failed, but eventually somewhere in 05 AQF the Icolian began sending emissaries to other nations to gain information about them and their threat-level. The Icolian met with the then lieutenant Kya and managed to set a treaty between the two powers. The Rambo describe their relations with the Icolian as intermittent at best, with incidents still happening. The Icolian began taking an interesst in Kya as well when she reached the rank of Marscalcus.

When the Galactic Empire of Cyrannus managed to conquer Rambo Nation in 05 AQF/01 NE and forced them to sign the Concordat- the Icolian began to fear their isolation was coming to an end due to the expansion of the Empire and the crumbling of the Nation. As such the Icolian began to venture to Quadrant 82 where they began mapping the Unclaimed Territories for their own benefits.

When the New Cyrannian Republic was formed in 03NE/06 AQF after the Cyrandia Conference, the Icolian were intrigued they were allowed to do so and awaited further developments. When the Icolians were informed that the Cyrannian Icolian of the Assemblage showed interesst in the events surrounding Mou'Cyran- the Icolian from the Quadrants also began showing interesst in the mysterious planet.

During the eleventh month of 06 AQF, the Icolian time hunter known as Azylkene managed to trap the Rambo Nation Constitution-Class Refit- the USS Enterprise-A inside an Icolian-Web. Coming aboard it ordered captain James Rambo to surrender his vessel, as Azylkene wanted to study the data the Enterprise had of the possible future they visited. Before events could unfold, Azylkene was forced to leave as the Enterprise came under attack, dissolving the energy-web and forcing Azylkenen to withdraw. 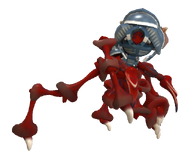 The Icolian use odd looking ships to most of the other species within the Cluster. Notable, Icolian vessels do not have controls as the Icolians use their telepathic abilities to commandeer their vessels.

The Icolian ligt cruisers are the most common and basic Icolian vessel. They are also known as "catchers" by other species due to their unique trait of creating somesort of energy web when teamed up with others of her class. This energy web can disable enemy ships, giving the Icolian time to conquer the vessel or easily destoy it.

The light cruisers are 25 meter long and are capable of transwarp are known to be equipped with strong shields and phasers.

The Icolian Space station, who all look the same are advanced and mysterious and rarely encountered by others. With weaponry and shielding they are easily protected and difficult to board or conquer. The placement of these station are both in normal space, where many of them are located near the borders of the Icolian territories in both the Quadrants and Cyrannus. However, these station can also be found in interphasic space, where they can either act as stagign area or as docking port for Icolian ship who travel between the various timelines or space to instantly appear in one place or another.

The station is build in a functional matter, where the station can uphold the high temperatures as well wich the Icolian suite better. For non-Icolian, persons should wear heat-protective equipment or suites or else die in the intense heat.

It has an average diameter for over 2100 meters.

“Be corrected, deceit is not tolerated” 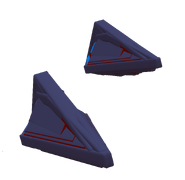 “We do not understand them at all, caution is advised”

“Not suited for assimilation, you will be destroyed”