“What's the point in fighting? It is counter-productive. In the end, all one wants is to live on and follow their dreams. Of course, sometimes there is no option and one must fight, but one must also remember that one's life is not entirely composed of this.”

The Horder are a species of extrauniversal, incredibly strong but very gentle creatures natives of the same universe as the Zazane. They are members of the Brood of War, the Indoctrinate Collective and Crispy's Insurrection. Hailing from the same universe as the Zazane and being absorbed by their culture for millenia, the Horder nonetheless retained their own customs and since ancient times, have been among one of the most welcoming and forgiving races to ever come to the First Gigaquadrant, having a culture centered around finding peaceful solutions to problems rather than try to brute force their way through them.

The Horder are massive creatures in size, power and patience, being notably difficult to anger and having a great tolerance for other creatures. However, they are also known for snapping completely when they do get angry, going into berserker states which are very difficult to control. The Horder are creatures of such strength they can potentially snap a Zazane in two, and to provoke one into anger is to dig one's own grave in most situations.

The Horder were native of the moon of Boruin-3, one of the dozens of satellites of the gas giant Boruin of the Garsh System. The Horder's home moon was a harsh, cold planet filled with large predators, so the species had to evolve to either tame or take them down in combat. The Horder evolved exceptional farming skills over time and created various cities across the four continents of Boruin-3, all independent from each other.

The Horder would remain divided until the fabled philosopher Uidian Mungdal started to spread his view of existence to the species, claiming the Horder would never mature as a race if they remained divided, and that they should join hands and set their eyes to the skies. While at first met with severe criticism, the Horder eventually started to agree with Uidian's teachings and united under a single government, and prepared to colonize the space around their star system.

The Horder Domain, has it had been named, expanded through the space around their home star and created a very small, yet stable empire. However, roughly only 1,300 years after its formation, the Horder Domain would be conquered by the Second Sovereign Domain. The Zazane would notice the Horder, despite their very small territory and military, were extremely potent foot soldiers for their unnatural physical strength. Because of this, the Second Sovereign Domain would change their plans from completely annihilating the Horder to turn them into low-level citizens.

While at first discontent with the change of life, the Horder remained silent. Philosophers of the Horder race still living would decide they had to "tame" the Zazane like they had done to the beasts of their homeworld, and so chose to accept their rule. The Horder would spread across Zazane worlds as manual labor, with some being taken to the military where they would be intentionally enraged to fight the enemies of the Empire. When the Zazane were chased off their home universe, the Horder followed them through their Great Migration, arriving at the Ottzello Galaxy.

Following the end of the War of Claim and the reformation of the Third Sovereign Domain into the Brood of War, the Horder were content to see the government was finally changing. They would start to be more respected across the society they lived in and became overall more active members of it. During the times of the Great Cyrannus War, the increasing relation between the Brood and the Indoctrinate Collective caused some Horder to migrate to it, allowing the species to spread even more. During the Golden Movement, Brood colonies with Horder with them have been absorbed into Crispy's Insurrection, with the insurrectionists appearing to enjoy the Horder's more peaceful ways of life. The Horder themselves, however, don't seem to care for the Insurrection's goals and remain neutral to it.

Horder are very large mammalian creatures with bovine traits. They possess large heads with with a pair of imposing tusks, three eyes and large horns. Horder are bulky and are naturally born with large muscles, which grow more as they grow up. A Horder's back have several bony plates running down their spines. Their feet are evolved for harsh terrain and as such are enveloped around a very soft layer of skin which appears almost as a shoe. A Horder would feel no damage from walking at the top of shattered glass. Horder have obtained some Shidium in their skeletal structure since they joined the Zazane Empire many years ago.

The Horder are well known for being the most peaceful species in the Brood of War. Extremely laid-back, friendly, and sometimes even lazy, the Horder are almost a complete opposite of their Zazane leaders. They are very dexterous beings with exceptional farming skills, and are also known for their love for philosophy. More often than not, Horder refer to individuals as "one". Horder are famous for being extremely hard to annoy or anger. They have no issue allowing children (their own or another person's) to jump, climb and play on their backs. In addition, most Horder also intentionally avoid conflicting opinions so they may not worry about getting annoyed. This is mostly out of security than politeness, however. An enraged Horder is extremely destructive and takes a lot of effort to be put down.

Despite being gentle and friendly, the Horder are among, if not the physically strongest species of the Brood of War after the Zazane themselves. Their strength and endurance alone makes them natural tanks, and Horder under the military are usually given even more armor and equipment, making them very powerful fighters. A Horder's punch is enough to crush a human's skull with ease and they have been seen throwing Zazane about with little difficulty. However, they are very slow moving creatures, being considered "mighty glaciers" when it comes to combat.

When enraged, a Horder becomes even stronger and loses its senses, becoming blinded with aggression. An enraged Horder is equivalentt in strength and ferocity to a Koda and have enough energy to take down a full squad of soldiers. Enraged Horder can only be stopped by being killed, paralyzed or being exhausted. Upon regaining its senses, Horder usually have no memory of the incident and appear genuinely confused by the damage they caused. 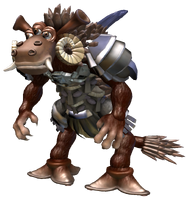 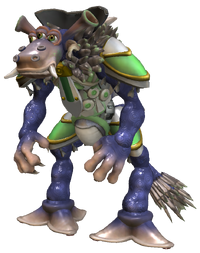 “One is here to lead us to prosperity.”

Geophees Abuglar is the first and current Supreme Advisor of the Horder race in the Indoctrinate Collective. An old philosopher, Geophees was chosen by the rest of the Horder to represent them in the Empress' Advisor Court due to her great wisdom and intelligence, having published several well-received philosophy-centered books over her two hundred and fifty years. Geophees, being a Horder, logically goes for the most peaceful solution in all situations and only resorts to violence in the most dire of situations, and due to her great wisdom, the Empress herself is known to sometimes seek her advice.

“Such a respectable race of creatures, they are like oceans; beautiful when calm, destructive when enraged.”

“I think they're rather cute.” 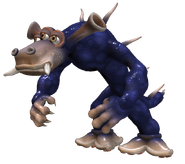 First model of the Horder
Retrieved from "https://spore.fandom.com/wiki/Creature:Horder?oldid=720889"
Community content is available under CC-BY-SA unless otherwise noted.