Heleanorians, natives of the Ice Star

“We can't remember how Cyrannus is like anymore, but we don't mind.”

The Heleanorians, sometimes called Borealis Libertus, are a subspecies of Libertus native of the Zoleia Sector of the Borealis Galaxy, and one of the member species of the Zoles Imperium.

The Heleanorians' origins date from thousands of years in the past. During the times of the First Republic, a group of Libertus found a wormhole which led to Borealis, called by the Cyrannians as Heleanor. The Republic quickly entered this wormhole and colonized several star systems in the new galaxy, which at the time was incredibly peaceful and quiet. However, as years passed, the wormhole between Cyrannus and Borealis closed, leaving the colonies abandoned by the rest of the Republic. These Libertus were forced to develop on their own, and started to expand through the galaxy to survive. They discovered the Cold Relays and found them very convenient, using them for faster-than-light traveling, and generations passed, the Libertus colonists evolved and adapted to the Cold Relays' alien properties, creating the Heleanorian subspecies.

The Heleanorians, as now they called themselves, lost all hope of ever returning to Cyrannus again, and so decided to create their own nation in Borealis. Calling it the "Republic of Heleanor", this new empire expanded around the first Libertus colony of Vhieraz and quickly became a major power of the Arm of Knowledge. During this time, the Heleanorians would meet and grow friendly relationships with the Zoles, Nilito and Samilinus, the other main empires of the Zoleia Sector.

When the First Borealis Galactic War began, the Republic of Heleanor joined the Zoles in fighting against the massive waves of space pirates who attacked the Arm of Knowledge. However, the Republic was attacked and almost destroyed by the Alvino Brood, only to be saved from extinction by the Zoles. When the war was over, the Heleanorians were proposed by the Zoles to join the Zoles Imperium as a protectorate, which they accepted. As time passed, the Heleanorians became full and respected members of the Imperium, having presence in important diplomatic, government and military ranks.

Much like the Cyrannian Libertus, the Heleanorians are generally a friendly, liberal and wise species. However, one thing that makes them different is that the Heleanorians are much more focused on the concept of righteousness since they joined the Zoles Imperium. Their lawful culture makes them quite popular in their neighbour empires, and very disliked by space looters around the galaxy.

Heleanorians are also known for their omnious-sounding music, which chills the spines of aliens the first time they hear it, as well as their art, much appreciated in the Zoles Imperium and allied empires.

Like their Libertus cousins, the Heleanorians are feathered reptilian creatures standing up to 3 meters tall in height. One thing that makes them different from the Libertus is the presence of ice-like bony structures in their heads, around the area of the brain. Heleanorian skin is also noticeably blue in colour, in contrat to the Libertus' usual brown color.

Something that makes the Henealorians stand among Libertus subspecies are their deep blue eyes, which while considered beautiful to some, are also considered frightening to others.

“This is really interesting.”

Lumian Friulum is the Prime Minister of the Heleanorians, and the leader of the species in the Zoles Imperium. She is a polite, cheerful woman who serves as one of King Rebaris's highest advisors, as well as aids him in ruling the entire Imperium. She obtained the rank of Prime Minister for her notable efforts in maintaining peace between the Imperium and several aliens, most importantly the Eaglartin. 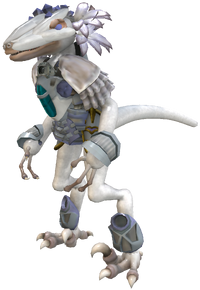 “For the well-being of the Imperium, I am willing to do whatever it takes.”

Ismins is one of the three current commandants of the Zoles Imperium. A stern and serious woman, she achieved the rank of commandant roughly at the same time as Vekaron. She is notably responsible for the membership of numerous empires in the Polar Crystal Alliance, such as the Krinkut Union.

Harana is an influential Heleanorian lord, who longs for the day when his people rejoin their former cousins of Cyrannus through the Galactic Empire of Cyrannus. Being a highly popular figure amoung his people, Harana caused a civil war in Zoles Imperium which caused most of his people to leave and join the Cyrannian Empire. He is now seen as a war criminal in the Imperium itself.

Heleanorian female
Add a photo to this gallery

“Valuable members of the Imperium. I'm very happy to have them as core members of our society.”

“They are an admirable people, sharing some similarities with mine. I wonder how good they are at fighting...”

“Joining the Zoles was the greatest mistake in your lives, Heleanorians...”

“Borealis needs more cultured, civilised and friendly people like them.”

Retrieved from "https://spore.fandom.com/wiki/Creature:Heleanorian?oldid=804715"
Community content is available under CC-BY-SA unless otherwise noted.