The Gynashanai, most popularly known as Gynash Dragons are artificial reptilian beasts created by Mahedore at Planet Gynash at the now-destroyed Gnaaha Galaxy. Originally created as laboratory experiments, they would become an obsession of their creator and later the bane of the Zanierton race after Mahedore unleashed them on their worlds, leading to their extinction. With their master now serving as a Vanguard of Shu'wokerama, the Gynash Dragons have become war-beasts of the Corruptus.

Not sapient but engineered to be loyal to Mahedore above all else, the Gynash Dragons are formidable beasts of war who know how to kill from birth, using their artificially-enhanced claws and teeth to combat the technology of their enemies. They can detect their prey through their most negligible movements despite lacking eyes, and once they have found their target, there is little that can be done to stop them short of death.

The Gynash Dragons were created by Mahedore at the colony of Gynash, at the core worlds of the old Zanierton Empire, making them an extremely old species in technical terms. The scientist originally created them as an experiment and as pets to give him company, but he eventually grew more and more obsessed with them, eventually choosing them over the rest of his race and unleashing the beasts at the Zanierton Empire's capital worlds by mass-cloning them and outfitting them with weapons and armor. This led to the Zanierton Empire being destroyed and the species to be extincted.

Over the next billion years the Gynash Dragons have lived in Mahedore's dreadnought as his pets, becoming more isolated from all life that was not their master and his cloned zealots and therefore becoming more aggressive with time. Their engineered, artificial brains also made them unable of evolving aside from minor physical changes, where they progressively lost their eyes and skin tones until they became what they are today. With the Corruptus taking over Mahedore's resources, the Dragons are currently used as war beasts of the demons of nightmare, sometimes being part of their armies.

The Gynash Dragons are large reptilian creatures with a total of ten limbs, with a pair of arms, two pairs of legs and two pairs of wings which they can use to fly. They possess pale white scales, their heads are adorned with numerous horns and their backs are covered in spikes which go all the way to their tails. Gynash Dragons possess no eyes and see through highly enhanced electroreception, meaning they can detect the electric stimuli of other living beings around them. Gynash Dragon males and females are indistinguishable from each other physically.

The Gynash Dragons are fiercely territorial creatures, especially concerning Mahedore, and attempts to harm him lead the beasts to go berserk in instants. They are distrustful to strangers unless Mahedore or his zealots assures them they are not a threat, in which case, the Dragons react to them with indifference. Being raised in an artificial environment, the Gynash Dragons have no food chain to be part of, but they are naturally predatory in behaviour and sometimes can be seen hunting vermin which somehow managed to sneak into their home spaceship.

The Gynash Dragons are not natural animals, and many parts of their physiology are in fact made of very advanced technology. Most notably, their claws and teeth are made of extremely powerful alloys which allow them to pierce and crush even advanced pieces of armor. Their muscles are also artificial, making them extremely strong creatures in physical terms and giving them enough power to fly with their wings for limited amounts of time. Their electroreception abilities allow them to find enemies with ease, but it can also be turned against them, for powerful electrical discharges used against the creatures causes them to be dazed, and their hearing and olfaction are also sensitive to being disrupted by loud sounds or powerful stenches respectively. 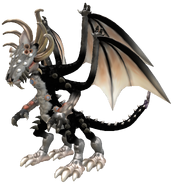