Warrior, but not violent, scientific

Can naturally speak Rambo Basic and Radessic with difficulty.

Usually lawful neutral, will use extreme force, superweapons and slavery if necessary.

The Grimbolsaurians founded the Delpha Coalition of Planets - one of the most advanced and powerful empires in the universe. A Type II.V+ civilization, they have the power to manipulate space and time, have control over several galaxies in two different universes and above all have a thirst for combat. However, they are not evil, but just aggressive towards the enemy.

Biology, culture and other characteristicts[]

Their language sounds like unintelligible chirps, clicks, whistles and mandible sounds, however their language is extremely complex, and cannot be deciphered by most humanoids (insectoids may do better, it can also be difficult for other non-insectoid species to understand the emotions and body language of a Grimbolsaurian). But a universal translator can help other humanoids how to understand them. The name for their language is called Klekkian Cuneiform (a concept invented by Imperios) by other species around the galaxy (such as the DCP's allies the Radeon). Klekkian is the older language from the Grimbolsaurians civilization stage (and sounds like mandible sounds and clicks), and Cuneiform is a newer language (which sounds like chirps and whistles). It is not complete Klekkian, as much of it was lost (with a great deal of things) during the nuclear winter in the civilization stage. Cuneiform replaces it.

Grimbolsaurians are warrior society that uphold honour above almost everything else. Warriors will often die for "blazing glory" and their greatest fear is dying slowly in a bed. Their so too bloodthirsty for many alien races. The Grimbolsaurian Empire is easy to anger however, but they can show peace and mercy. Please do not be put off by their war-like nature, despite it they are actually quite friendly! Just don't cross the line with them, or your empire is as good as extinct!

The Grimbolsaurians have had no religion since the end of the tribal stage. And much of their ancient culture and history was destroyed during the nuclear wars and holocausts on their homeworld Mirenton, and in the horrors of the war, religion, science and ancient cultures were sadly lost for good.

Although Grimbolsaurians don't worship Emperor Wormulus II as a god, they respect him as one. 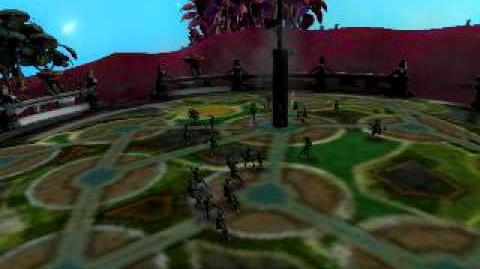 In the Golden Age, the Grimbolsaurians and the other DCP members had great technologies (Ghost phasing, Tachyonic shift drives, star killers), amazing construction capabilities (Stellar engines) and obscene powersources (such as black holes).

A different way of looking at a Grimbolsaurian. Drawing by Richardson72.

A female made by Imperios. 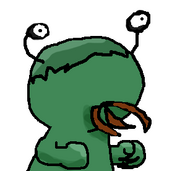 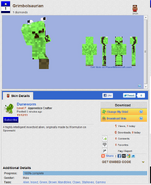 A Grimbolsaurian Virtual (Made by Sporesauce 95, download it here if you play Minecraft.

The true evolutionary line started later in the creature stage.

The organic molecules started forming in a comet when the organic brew started to warm up as the comet got closer to the home star Chilius during the young days of the solar system. Carbon and other moleculules started to combine into RNA and DNA. Very simple near lifeforms started to form. The comet was then plunged by Chilius into a young planet called Mirenton.

The first life on the planet was extremely simple, some were composed of RNA or TNA rather than DNA. DNA soon became the dominent molecule. Simple near-life forms started evolving. Then the true lifeforms evolved. Early bacteria and viroids were the first.

The most advanced microbe evolved after millions years called Micross cilladon evolved for speed with extra Cilia and a jet for extra speed and turns.  It came close to the top of the food chain.  Eventually after millions of years it evolved into an aquatic animal with the cilia being replaced by fins.  Due to epic sea monsters it evolved into a slug-like creature called a slimion that could live on land.

It started becoming the top predator evolving weapons such as a strike and charge as well as good senses. The slimion then evolved legs  millions of years later.  The slimion evolved into various forms of Grimbon who eventually became bipedal and sapient giving rise to the Grimbosaurians.

During tribal stage, the Grimbolsaurians domesticated the Tri-Chomp, used for riding or collecting its eggs for food. In later times they became pets. But young, inexperienced owners should be aware that the Tri-Chomp can be aggressive, even though it is a herbivore.

In the middle ages, there was a great physcic war that raged across the surface. A few strong elementals and psionics were fed up with the more primitive minded Grimbolsaurians, and decided they wanted to take control. Wars raged across the many primitive civilizations on the planet. Eventually, there was only one of these elemental conqueres left, but by then, his nation was the most powerful. The future Emperors of the Grimbolsaurians will have descended from this conquerer.

The Grimbolsaurians were very aggressive in tribal stage, and city/civ stage was no better. There was some peaceful nations, but a devastating thermonuclear war broke out, which with the launching of ICBMs or Intercontinental Ballistic Missiles, EM bombs and other WMD's almost causing an end to the Grimbolsaurian civilisation (only until recently, has the genetic conditions from radiation poisoning been solved). Not long after Emperor Wormulus I was assasinated. For several decades, the post atomic horror gripped the planet, and wild road gangs emerged and governments collapsed. However, one nation survived (the warrior, lawful one) and fortunately they united to survive, and out of the ashes rose a young empire, led by Emperor Wormulus II...

See Delpha Colition of Planet's history article for their forays in space and transevolution into PostGrimbolsaurians.

“Technologically advanced, good, have fought the Ayrai'Shikua and survived, good to be an ally with. What more could you ask for, from such a great nation. The DCP is one of the best things that have happened to the Universe, helping many, and helping with annihilating the evil.”

- Admiral Arian, of the Gablinus-Avis Empire.

“I like their adaptability in combat, yet their slavery philosophy is something I would not support”

“The Grimblosarian is a valuable enemy and prove time and again to exceed our expectations... we wish them long and enjoyable life periods.”

“Dey is dumb. nuff said. All dey is derev for is so we can eat dem like pretty much evryone.”

- Who else but the Loron boss?

“Noble warriors. We honor their power, and their pride. We have seen them fighting against Xhodocto and winning - almost no one could do this.”

“The Grimbolsaurians are one of the strongest empires we have known, we would not be alive if we oppossed them.”

“The Grimbolsaurians are one of our most powerful allies and we have great Galactic Relations with them, however their ideals on slavery is something we do not agree with.”

“The Grimbolsaurians are awesome. They're super-powerful and still really friendly. We couldn't ask for a better ally.”

“We approve of many things they do, they've helped many beings, but they also accidentaly hurt us with the Nanohorde. None the less they do stand as a force of good. We hope to have a good diplomatic relationship with them.”

“A species with a good cause, it's a shame they are so centred aroud violence, but with good intentions!”

“We feel that this young species has done exremely well and we see them continuing to flourish for many millenia! They have a good cause and are great with terchnology and developed it much faster than ours! They are excellent warriors too!”

“Very strong warriors, we must respect them for that. Shame they will have to be DESTROYED!”

“The Grimbolsaurians? The nicest guys in the gigaquadrant, if they like you. If they don't, you may as well give up now. ”

“We saved them from their Universe's collapse and we have shared technology with each other. A race which an alliance is a must.”

“The Grimbies are kind warriors. They saved my empire so we are eternally grateful.”

“The Founders of the mighty and all powerfull DCP, they have been our allies for a long time and we fought side by side them during the Tigris War and the other conflicts of the War of Ages. The Grimbolsaurians themselves are great persons, smart and clever they can also enjoy normal things and they fight for the good cause, in which we admire them for. They pledged themselves to fight for a safer universe, and we are proud of them. They fight with honor and a fierceness, rare qualities seen on a battlefield.”

“A touch too bloodthirsty for most civilised warriors, but nonetheless they are great allies. I am glad that our races were brought to friendship before we were forced into war.”

“Truly a magnificent and valuable ally, helped us several times in the past and we own them that. May our species remain friends for the years to come.”

“A strong empire...in one reality we could have slaughtered for the greater good.”

“They have wonderfull empire, they are great warriors... the only thing I can say is envy”