“Garukuts are a diverse bunch. They are either murderous, shrewd, malicious or greedy. Sure you can come across some better ones, but you can't help but feel distrust for their kind. They're huge creatures who can easily peck your skull in half, and they're well aware of that.”

The Garukut are a species of beaked, winged reptilians native of the low-gravity world of Garuga-3, at the Limeis Sector of the Borealis Galaxy's Arm of Knowledge. These wyverns are known across their space for their foul temperament and little patience for the incompetence of aliens, and those who do not pledge themselves to their empire are fierce and feared crimelords who are rivalled only by the likes of the Wranploer. Some time after the Polar Crystal Alliance's arrival to the sector, the Garukut decided to align themselves to them in hopes to increase their influence and power in the galaxy.

Garukuts are fearsome creatures who can easily reach over nine meters from head to tail, and they are able to fly with their immense wings in planets with low gravity such as their homeworld. The species is also extremely poisonous, with their venom being concentrated at their tails and able to intoxicate large creatures such as Wranploer in a matter of moments. Their technology is obsolete when compared to most of the galaxy, one of the biggest reasons being the race's lack of thumbs which has restricted their development to some extents.

Little is known about the history of the Garukut people due to their rather unwelcoming nature. They are known to have achieved a spacefaring society roughly 3,000 years before the beginning of the Ice Age, making them a relatively new species in intergalactic affairs. During their history, they came to conflict with the Paladians due to power disputes and the latter trying to impose their views of order on the Garukut people, leading the two races to remain distrustful for each other in the current days. With the Polar Crystal Alliance's expansion into the Limeis Sector following the joining of the Paladians, the Garukut Empire chose to align themselves to them as well in order to increase their influence in the galaxy, leading the race to spread to the rest of the galactic arm.

The Garukut are rather draconic in appearance, possessing the body build of a wyvern with the exception of their distinct beaked heads. Their heads are adorned with many rows of curved horns and a pair of large, pointy ears, and their forelimbs are used as very large wings. Midway through them are their hands, which are only composed of two large clawed fingers with no thumbs. Garukuts also possess long tails ending in spiked weapons, they they can use as natural blades. They are very large, hollow-boned creatures who can get to over nine meters long when adult, and they can use their powerful wings to fly in low-gravity worlds. Garukut males can be told from females by the presence of a large, furry mane in their necks.

The Garukut are known for being foul-tempered creatures who easily lose their patience, especially when dealing with members of other races. Their aggressive and unwelcoming attitude makes them distrusted by most other Alliance members, especially the Paladians who once fought their people in the past. The Garukut have some variation in personality, with some fully embracing their foul reputation and others attempting to grow more amiable toward the rest of the Polar Crystal Alliance's members, though experiencing difficulties due to the distrust for their people and their own natural aggression.

Garukuts rank among the physically strongest native species of the Borealis Galaxy. Their sharpened beaks are formidable melee weapons which can be used to crush the bones of humans with little difficulty, and their claws also show respectable power for slashing flesh. Primitive ancestors of the Garukut are thought to have attacked their prey by striking them with their tails before raking them with their talons while delivering furious pecks to their heads to finish them off. The species is also very poisonous, with their poison being emitted by the spikes of their tail and causing muscular paralysis on their victims. 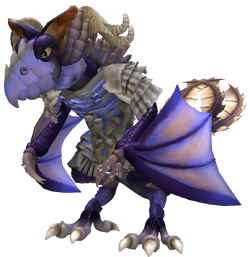 “All for the prosperity of my-I mean, our people.”

Yian Ikeres is the diplomat representing the Garukut Empire in the Polar Crystal Alliance. A rather typical Garukut, he hopes to use the Alliance to increase the power and influence of his people, but as a citizen of the Alliance, he is also heavily opposed to piracy and wishes to use his power as a diplomat to have the Alliance help his empire eradicate Garukut criminals across the Arm of Knowledge. Yian is open to aliens as long as they benefit him, and he believes growing friendships with strangers brings nothing but misfortune in the future.