The Errrbots are a race of androids originally created by the Ermitant scientist Errr as his personal army, natives of the Cyrannus Galaxy. They are currently under the jurisdiction of the New Cyrannian Republic.

The Errrbots were originally created by Errr during the Robotic Uprising, where they swarmed through Planet Puria and conquered the main continent for Errr's favour. The Errrbot forces were eventually defeated when the Ermitant fought back and defeated Errr. While the Errrbots were defeated, thousands of them remained inactive at Errr's laboratory.

The Errrbots killed in the Robotic Uprising were brought back to life by Shu'wokerama during the Second War of Black Fog, where they served as colonists for the Marinoxidiz. The Errrbots were also present in many battles, notably the invasion led by Hagto'Zhl against New Draka, where the Errrbots fought against the Delpha Coalition of Planets. After the Corruptus was defeated, the Errrbots died out once again, but after their later resurgence, the nightmarish demons brought them back as zombified slaves called Kheora'Errr.

The Errrbots who remained inactive in Planet Puria were awakened during the Dark Times, after a scientist accidentally turned them on. These Errrbots, angered and confused, quickly swarmed the planet and caused massive destruction, until they were deactivated by a special EMP weapon under the orders of Admiral Tharnak Adraci. These Errrbots would later be taken by the Empire and reprogrammed to believe Tyrómairon was Errr, making them loyal to him instead, before being distributed across Imperial worlds to serve as guards and law enforcers. Following the end of the New Cyrannian Republic, these Errrbots were once again reprogrammed, now to follow the instructions of Republic Command.

Errrbots are stoic and unfeeling creatures not akin to machines. They have no society or culture of their own, and merely exist to follow orders.

Errrbots are vaguely reptilian in appearance and have jawless mouths. They notably possess both an endoskeleton and an exoskeleton, making them very resistant to most kinds of damage, not counting their cybernetic enhancements. 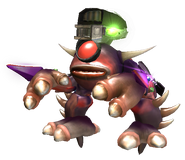 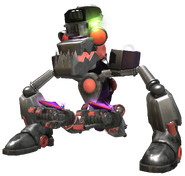 “My first child- Ahem. Creations. I hear they were reactivated at the mother galaxy. I can only hope whoever controls them now is making good use of them.”

“They were a great irritation in the Black Fog War and caused quite some damage to our relatively new army at the time. Our battles with these things also allowed our research teams to develop ways in which the nanomachines of our soldiers could aim their weapons better and fire more effectively for different threats; they really helped teach us threat management, and another foe wouldn't have had the same effect without the help of the Dracogonarious' added knowledge.”

“They will prove most useful.”

First model of the Errrbot