“The Ermitants are probably the most harmless people you can come across at Cyrannus. They would not hurt a fly. Indeed, they would much rather try and make deals with it. A sly people, they are, but you must be a heartless monster to even consider hurting them.”

The Ermitants as a species of vaguely primate-like mammals natives of Planet Puria, at the Inner Rim of the Cyrannus Galaxy. Well known for being extremely peaceful and with a great taste for commerce, they currently live under the New Cyrannian Republic. Their welcoming behaviour makes them attractive and easy to make friends with, while at the same time making them nearly defenseless against those who wish to exploit them.

The Ermitants, despite their relative young age, have become widely known across Cyrannus for their strong treatment of economy, having become popularly known as a race of traders and merchants who are eager to make business with others. These stereotypes are not wrong and the Ermitants tend to fully embrace them, being a species who has evolved with little fear of outside threats and therefore widely welcoming to outsiders, at the cost of being victim of far more powerful malevolent forces at multiple occasions.

The Ermitants evolved from monkey-like creatures inhabiting the bizarrely coloured world of Puria, where the earth is orange and the oceans are red despite being made of normal water. Their society evolved to discard most violent methods in order to continue existing in safety, and they joined the galactic community of Cyrannus at 618 BNE with the formation of the Ermitant Empire. Before this event, they were victims of scouts from the Grox Empire, who attempted to dominate the planet through the scientist Errr and his army of Errrbots in the event known as Robotic Uprising.

In the following centuries, the Ermitant Empire became widely known as a friendly and welcoming nation of traders who became fast friends of civilizations such as the Federation of United Worlds and its successor, the United Republic of Cyrannus. More than half of the Ermitant race was exterminated by the First Cognatus Empire during the Intergalactic War, and they were only saved from complete annihilation thanks to the acts of the United Republic, who gave them protection and military support. Years later, after the end of the Great Cyrannus War, the dark acolyte Meketanor infiltrated the presidency of the Ermitant and declared they would become citizens of the Empire, causing the species to become divided in loyalists and rebels who would later join the New Cyrannian Republic.

Following the end of the Second Great Cyrannus War, all Ermitants have pledged their allegiance to the Republic once their worlds were liberated, and now live under it as loyal members.

The Ermitants resemble primates in biology, having a vaguely monkey-like body build. They are very tall creatures, standing at an average of three and a half meters when reaching adulthood, and are well known for their large, webbed ears which grant them great hearing. The hands and feet of the Ermitant are also webbed, with their feet in specific possessing a strong suction ability which gives them the ability to walk on vertical surfaces or ceilings, though they are required some way to sustain their own weight to do so due to their heavy heads potentially making them fall down. Females possess comparably softer features than males and tend to be slightly shorter in height, though both genders are known for developing huge, almost mane-like hair which can become big enough to rival the skull's size.

The Ermitants are, by nature, extremely friendly creatures. They are assumed to have disregarded the concept of war in their society hundreds of years before the rise of the Ermitant Empire, where their military served only to protect themselves against alien threats and even then was considered one of the least developed military forces of the Cyrannus Galaxy. Most Ermitants, regardless of gender, have a strong affinity with commerce and are known for being sweet-talkers and dealers, with some saying they have developed a kind of cultural pleasure in making coin-based deals with strangers. Their almost harmless and welcoming attitude makes the Ermitant easy to befriend, and at the same time, easy to exploit, for they tend to do as told with little resistance unless actively harmed in some way. 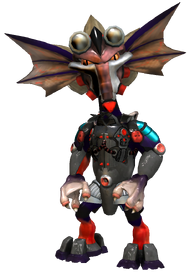 Errr Krrarrr Lerciannn is a famous Ermitant scientist who is notable for being the original creator of the Marinox. An extremely intelligent individual who was far ahead of his time during his early days, his power-hungry and megalomaniac attitude eventually led to him turning to the darkness as he tormented numerous worlds with his creations, which ranged from mere robots to even demons. However, as of now, he serves in the Indoctrinate Collective and hopes to redeem himself for his crimes. The Ermitant with the most powerful mind in history, Errr's intellect cannot be ignored for his inventions were considered near miraculous by the old Ermitant Empire. While he attempted to conquer the Milky Way and once sided with demons to do so, he has since developed regret for his actions after he was defeated by the galaxy, and today he lives in penitence, hoping that one day he will be forgiven and hopefully forgotten of all the destruction he caused. 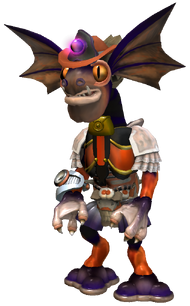 “Filthy rebels, I swear. How can I please the Emperor when these runts are all running about opposing him and stuff?”

Draedarrr Muvongius was an Ermitant loyal to the Galactic Empire of Cyrannus who served as a Mandator, serving as his people's representative in Imperial affairs. When the old Empire was declared to plan on joining the Imperials, Draedarrr was one of its biggest supporters, believing a life of great power and fortune awaited under the rule of Emperor Tyrómairon.

In the last years of the Second Great Cyrannus War, Draedarrr lost his life when he refused to surrender to the Republic when they liberated Puria, and he was executed by Ermitant officers. 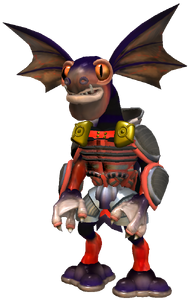 “Give them hell in the name of Venetia!”

Leonarrk Relgalll was a young Ermitant who was the only child of Nondarrrt, the deceased commander of the former New Ermitant Republic. He was born at 30 BNE from Nondarrrt and his Ermitant wife who would be eventually killed by space pirates who attacked the colony she lived at. At the age of 16, he joined the military to follow his father's footsteps, and when the Ermitant formed the Republic, he followed him to Cyranai and later to the New Cyrannian Republic. Nondarrrt's death heavily affected Leonarrk, who swore to never forgive the Bisistar for it. Despite being very young for an Ermitant, Leonarrk managed to prove himself as skilled as his father was on his age, and the Ermitant served as Tactical Officer of the Republica, Fleet Admiral Cretacea's vessel, up to its destruction during the Battle of Cognalorilos in 17 NE. 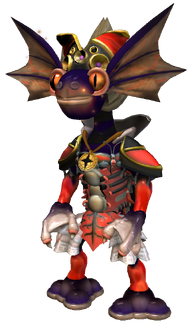 “Our people has suffered so much... all I hope for is that one day we will be united again, in peace.”

Milinitt Loransia was a former rebel leader and a senator living at the New Cyrannian Republic. Starting out as one of President Gharrrko's advisors, she later led the resistance movement when the old Empire was announced to plan on merging with the Galactic Empire of Cyrannus. Leading her supporters to the Cyranai Galaxy, Milinitt became the president of the New Ermitant Republic up to the events of the Cyranai Civil War, when her people were kicked out of the galaxy by the Bisistar Domain. After leading the survivors to the Cyrannian Republic, Milinitt pledged her full allegiance to it and served as her people's main representative in the Senate until her death during the Mou'Cyran Cataclysm. 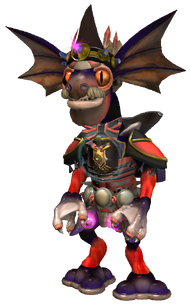 “Seems like peace is too much to ask around here.”

Gharrrko Jhankel was an Ermitant politician who serve as the president of the old Ermitant Empire a total of five times during its existence, including its foundation and dissolution. Valued by his people for his great mind and leadership skill, he was also noted for being an excellent diplomat and a great businessman, once being the CEO of the main starship manufacturers of the Empire. During the Dark Times, he was assassinated by Meketanor, the event later leading to the dissolution of the old Empire. 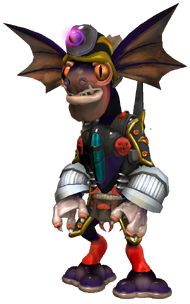 “I fight for my people's freedom above all else!”

Nondarrrt Relgalll was the last admiral of the old Ermitant Empire's space navy and a friend of President Gharrrko. He was remarkably the leader of the Ermitant resistance during the Intergalactic War, fighting all he could against the advancing Cognatus menace though he only survived thanks to the aid of the Allies. After the dissolution of the old Empire, Nondarrrt joined the resistance group who fled Cyrannus and escaped to Cyranai to form the New Ermitant Republic, though his life eventually came to an end during the Cyranai Civil War when he was murdered by Filtroo Catulus.

First model of the Ermitant

“Gifted traders and noble people. Would they be interrested in trading with us?”

“Blergh, now even Cyrannian Primates are found in the Quadrants?? A disgrace!”

“A friendly and civilised people. Their culture will benefit the New Republic greatly.”