Main: Quadrantia Basic
Secondary: Elen'Nanethian
The Elen'Nanethian, also known as the Capricyránae (Caprisaurus libertus) or the Quadrantia Lilbertus are a subspecies of the Libertus species, natives to the Cyrannus Galaxy. The Elen'Nanethian became members of Rambo Nation until its fall in October 2819 (21 AQF). In its aftermath the Elen'Nanethian would see their rise to prominance as their homeplanet of Boreas became the capital of the Legatus.

The Elen'Nanethhian ancestors were native to the temperate forests of Capricaerón, where the Libertus evolved as the apex predators of their continent, using their swift and agile physiology, as well as their high degree of intelligence to hunt and kill prey. Equipped with razor-sharp teeth, a killing claw on each foot and a top speed of up to seventy kilometres per hour at full sprint, these early Libertus were almost perfectly evolved for hunting and killing. The Elen'Nanethian were originally Libertus within the Capricorn Sector Alliance though migrated to the Quadrant Galaxies after first contact with Rambo Nation in 2794 (04 BQF).

Over the following decade, the Elen'Nanethian changed into appearance due to the magical energies of the Quadrants. As such the Capricyránae Libertus have slight differances with their cousins in Cyrannus, for example most female are blue colored and slightly smaller, while the male counterpart have a lighter skin color and are also slightly smaller than their male cousins. What remained the same is their love to wear fancy clothes, mixing Cyrannus and Quadrantia influances in it.

Upon first contact with Rambo Nation in 2794 (04 BQF), a large group of Libertus settlers migrated to the Quadrant Galaxies and settled on the frozen planet Boreas. In grattitude for the Capricorn Sector Alliance aid in the First Galactic War the Ramboidae authorities granted the Capricyránae full membership within Rambo Nation, as they welcomes all who wish to have shelter within their borders and pledge fealty to the Royal Dynasty. The Capricyránae Libertus were represented by Senator Adar of Boreas and Senator Lord Ram'Lendila of the Cyrannus Colonial Sector respectivly.

With enforcement of the Nim-Glaré Concordat 2803 (05 AQF) things changed for the Elen'Nanethian. Public opinion in the western Ramboidae sectors turned against the Elen'Nanethian as most felt the Libertus were enforcing their high Cyrannian culture upon the natives of the Quarants. One notable individual, Maketh Triggant rose to prominence in this time and industrialized Boreas while gaining popularity with is own people and within the Legatus Finduilica. After the fall of Rambo Nation in 2819 (21 AQF) the Elen'Nanethian did not take up arms nor joined the Rambo Loyalist- instead they fortified their hold over the eastern sectors and prepared to set up their own government. Senator Adár, their long time representative and leader vanished during this time as well and the Elen'Nanethian became an influential species within the greater Legatus.

The following planets are mostly associated with the Elen'Nanethian or have a majority of the species inhabiting the planet. 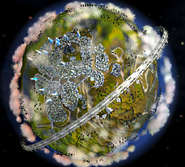 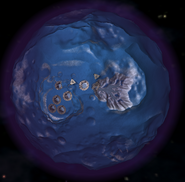 Listed below are the known Elen'Nanethian: