The Dvottie are a species of avian native to the planet Virgon in the Cyrannus Galaxy. They are a common pet among the citizens of the galaxy.

The Dvottie are a race of bird native to the jungles and plains of the planet Virgon in the Calithilaen System. In the location in which they evolved, there was a lack of natural predators, and the Dvottie prospered, having no natural enemies. This made such features as weapons unnecessary. When the Libertus of Virgon made contact with the other Twelve Colonies, the Dvottie became popular pets across the twelve worlds, becoming the pets of civilians and leaders alike.

Centuries later, the United Republic of Cyrannus continued using the faithful Dvottie as pets, and they even became popular among alien empires outside of the galaxy, such as Rambo Nation. Even during the reign of the Galactic Empire of Cyrannus, Dvotties remain as popular as ever.

The Dvottie possesses biology that defies conventional logic, and despite their cute appearence, they have some effective defensive mechanisms. Scientists are still stumped to find an answer to the fact that a Dvottie can cough up flowers, sugar and cotton wool if under threat. If this fails to work, and if another entity tries to harm a Dvottie, the aggressor often undergoes a transmogrification into a Dvottie themselves, or various other adorable lifeforms. If one manages to kill a Dvottie, the killer similarly is spontaneously reborn as the same individual, effectively making the Dvottie immortal. 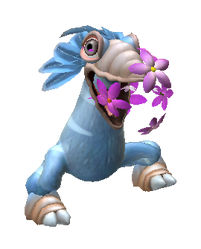 The Dvottie can defend themselves in an explosion of flowers. 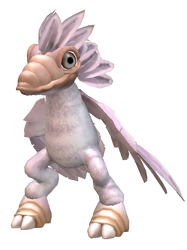 Flying Dvottie
Add a photo to this gallery

“A loyal and cute pet, the Dvottie is great for children!”

“I have to admit, I have a soft spot for these little things.”

“I love these little creatures.”

“These little things are so adorable, seeing one just melts my heart.”

- Cult of the Deathmarch

- The Dark Purger, replying to the Cult of the Deathmarch

“SILENCE, YOU SACK OF FLESH. These mortals shall become ash like THE REST OF YOU. ”

- Ekthrikos in response to The Dark Purger

“Hm. I would like to have one. Perhaps the Demiurgs could discover the source of their mystical abilities...”

“ I like them. They're cute, friendly, and very quirky. Parvus is the only magical thing I really trust.”

“I must say, they are really adorable! Shame I'm in a different Galaxy...”

- Captain Bascaran of the Elysian Empire

Retrieved from "https://spore.fandom.com/wiki/Creature:Dvottie?oldid=823752"
Community content is available under CC-BY-SA unless otherwise noted.