“The lessons of the past protect us from mistakes in the future.”

The Dromeourus are a species of saurian native to Lurasura, in the northern reaches of the Cyrannian Inner Rim. The Dromeourus have long been influential players in the political structure of the region. Highly intelligent, secretive and crafty, the Dromeourus have prized their independence throughout their spacefaring history, and while they were members of the Federation of United Worlds, and later, the United Republic of Cyrannus, they have always stressed that their space lies apart from the rest of the galaxy. The Lurasura System, home to seven temperate planets, gave rise to seven distinct civilisations, of which the Dromeourus and the Velociampo are the most notable. Eventually, all seven united under the Dromeourusi Republic, which enjoyed relative peace for much of its history.

However, during the War of Red Wastes between the Neudani Star Kingdoms and the Basileus Imperium, the Lurasura came under attack by a Basileus armada seeking to establish a foothold in the Inner Rim. The Dromeourus and their star kin were unprepared for the attack, and while they fought bravely against the invasion, it was only through the arrival of the Cavaneu that they were spared subjugation. Such a harrowing experience impacted the Dromeourus more than the seven other species of the system, and thus gave rise to a certain degree of unease around alien life. Such sentiments were worsened during the Intergalactic War, when a Cognatus battlefleet ravaged the Lurasura system, before being repelled by the Republic.

Naturally curious, however, such feelings are often cast aside when working alongside other species. Nevertheless, in galactic politics, while the Dromeourus often explore beyond their own worlds, they greatly value their own independence from the Core Worlds. While they were afforded special status under the Federation and the United Republic, with the rise of the Empire, they were forced into submission alongside the rest of the galaxy, prompting many Dromeourus, most famously in the case of Resistance General Talin Ver Delané to rebel against their Imperial lords.

Amidst the fertile systems of the northern Inner Rim of Cyrannus, the people of Lurasura emerged under a single banner, which spread across their system, uniting the peoples of seven distinct worlds under a single government—the Dromeourusi Republic. Establishing peaceful relations with the Libertus of the nearby planet Achiliquin, they eventually joined the galactic community upon their membership in the Federation of United Worlds. However, their peaceful tenure exploring the starways would come to crashing end during the devastating War of the Red Wastes, during which the Basileus Imperium, native to the stars beyond known space, attacked the Inner Rim, seeking to exterminate the Cavaneu and all those who would oppose their supremacy.

Unequipped for a galactic war, the Dromeourus pledged neutrality, refusing to declare for either the Cavaneu or the Basilues. Neutrality did not protect Lurasura, however, failing to prevent a Basileus armada besieging and occupying the entire system. For over a year, Lurasura remained in Basileus hands, before a joint effort of Cavaneu and Dromeourus rebels managed to push them off-world. In the aftermath, the Dromeourusi Republic retreated from galactic affairs—to nurse their wounded pride, repair their shattered infrastructure and protect their broken families. Though a naturally inquisitive species, a trend of isolationism predominated politics on Lurasura for centuries afterwards, and almost succeeded in convincing the electorate not to endorse membership in the United Republic of Cyrannus in 53 BNE. Indeed, these naysayers, in their eyes at least, would consider their belief vindicated during the Intergalactic War, when a Cognatus battlefleet ravaged the Lurasura system, though even they must admit that without Republic intervention, the system would have assuredly been lost.

Generally supportive of President Apollo during the Great Cyrannus War, the people of Dromeourus regarded the rise of the Galactic Empire of Cyrannus with suspicion—which only worsened with the passage of time. For while the Republic had respected the sacred sovereignty of Lurasura, the Empire openly displayed its disdain for it, placing the Inner Rim under the Grand Mandatorship of a Libertus. As such, with the rise of the New Cyrannian Republic, and the onset of the cold war and the Second Great Cyrannus War, war once again darkens Lurasura's horizons, with the fate of the planet hanging in the balance.

Closely related to the Libertus of Capricaerón, the Dromeourus are similar to their cousins in both appearance and culture. However, while the Libertus have been shaped for their mastery over galactic politics and diplomacy, the Dromeourus were shaped for the worst by the brutal Basileus occupation of their homeworld during the War of the Red Wastes. Though inquisitive about the wider galaxy, Dromeourus tend to be slow to trust, which has propagated a common stereotype that they are a cold, distant and untrustworthy people. To the people in the systems surrounding Lurasura, however, they often deny such labels. For the Dromeourus, while crafty and calculating, never betray an ally, nor do they reject the help of former enemies. They are a cultured and inclusive people, for whom the galaxy and the wider universe are full of knowledge simply waiting to be discovered. Indeed, the Dromeourus are some of the most naturally intelligent species in the Cyrannus Galaxy, being known for their analytical skills and proficiency in the sciences. 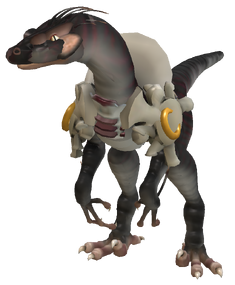 “Major members of the Cyrannian Republic. Their membership has been beneficial to all within the URC.”