“The little races of the world can do as they please, so long as they do not disturb us or get in our way”

On the surface, Draonoggr resemble bipedal dragon-like reptiles. They also bear some unknown relation to Zazane. They are often large, measuring a few metres tall and posess huge bat-like wings that allow them to fly for long distances at a time. Their bodies are covered in thick, hard scales while a tuft of straw-like hair is typically found at the back of their heads.

Draonoggr are carnivorous by nature, preferring to eat a wide variety of animals and are equally capable of digeting them raw (sometimes even still living) or roasted. They have displayed signs that their diet can include various sapient beings.

Draonoggr posess a constitution that makes them biologically immortal. While in practice they cannot die from age they are still vunerable to injury or disease. The side ffect of this immortality is that as they get older they continue to grow in size indefinitely, their scales get harder and age does not dlow them down or weaken them. The opposite of what normally occurs with strength and awareness with age - becoming stronger and more alert with time. While most are seen at sizes of between three-and-a-half and six metres, it is theorised that the oldest in existence could be even larger, perhaps over ten metres tall (most Draonoggr in positions of power are typically centuries old and considerably larger than their subordinates). As they get larger, however, more food must be consumed to sustain the massive bodies.

A typical Draonoggr is often arrogent, prideful and posesses a sense of superiority over other species, possibly stemming from their lifespans and physical size. A member of the species often posesses a high intelligence and cunning. They are usually stoic and content to spend long periods of time on a single activity before moving on.

Draonoggr in general are obsessive hoarders and are highly posessive. Each one keeps a personal hoard as a display of status and power to others and is highly protective over what they have. Compelled by greed it is common for two or more Draonoggr to fight over each-others' hoards, the value of which can vary depending on the tastes of the individual. This variation of taste means it is possible for some to amass mountains of a certain object only to be ridiculed by another who does not share their tastes.

When a Draonoggr dies, it is not unheard of for others to raid their hoards for their own personal gain and most prefer to gather hoards out of objects they have found over what they may craft themselves.

As they get larger, it is not uncommon for one to undergo periods of self-induced hybernation in order to conserve energy and reduce the need to eat. The larger they get, the longer the hybernation cycle typically lasts. The most ancient of Draeonoggr are believed to spend years in hybernation, waking up for a few months in order to remain active before going back into hybernation.

Draonoggr are spread across the world, as a result they have become highly diverse, united by a few common traits and overall anatomy. These subspecies vary wildly from each other and see other species differently. Ever since the end of the Adamantine Age, their nmbers have been thinned somewhat with the Draokorumnoggr surviving with the most numbers due to hiding in caves underneath the Everwinter Highlands while the remaining Draothumnoggr have been brought on the verge of extinction with their old holdings decimated. 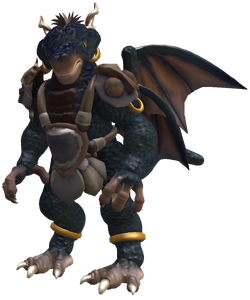 Recognised as the most common form of Draonoggr in Koldenwelt, the Draokorumnoggr live deep inside the western mountains. There, deep in the earth where gems and metals are plentiful they have created a mighty empire. They are the largest and most numerous subgroup in Koldenwelt, ruled over by an ancient and powerful High Archon. Most Draokorumnoggr see themselves as the de-facto owners of the Western Mountains and militantly strive to secure it.

Trade connections with the Merovar Dynasty provide for their domain as well as providing the Rest of Koldenwelt with their highly sought-after jewelery, weapons and armour. Although such things do not compre in value to ancient Elven crafts, the level of detail and exclusivity still make such peices highly sought after. Gems are plentiful and as such it is common for Draokorumnoggr hoards to consist of gold, war trophies and fine-cut gems. Among other species, a group of mountain-dwelling humans share the mountains with them and are some of the few groups who have openly seen a Draonoggr.

They are not peaceful however. Being the most territorial it is not uncommon for them to raid their surroundings for slaves, food or pleasure. Their arrogence gives them little care for who the lands may belong to, as such mountain lords will informally claim such rgions for their own; sometiems going as far as to destroy the home of the official landholder in order to secure it. 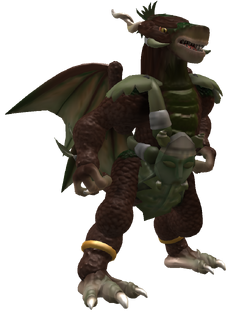 Smaller than Draokorumnoggr, Draoalfnoggr live within the forests and jungles of Koldenwelt and see themselves as guardians of the areas they live in. They are aggresively territorial creatures who, like their mountain-dwelling cousins, enjoy spending time crafting with more emphasis on wood, bone or earthenware than metal. The adaptations to the forests mean that they frequently sport various mosses on their backs, larger memebrs of the species sometimes have bushes or smaller animals living on them. Essentially making them mobile ecosystems. Such things don't bother them however, and some even enjoy the vegetation they carry around.

Living amongst trees, they will often prefer living in burrows or in groves and anyone who sets foot within will be aggresively attacked. Draoalfnoggr prefer to make their hoards out of animal bones and pelts which unfortunately makes them more perishable.

Unlike their mountain-dwelling cousins, their communities are more decentralised. They often prefer to live alone or in tight-knit communities within extensive burrows. Any form of trade usually comes in the form of food picked from the deeper reaches of the forest or wood. Settlers who encroach upon their forests are often seen as invaders and set upon by territorial Draoalfnoggr 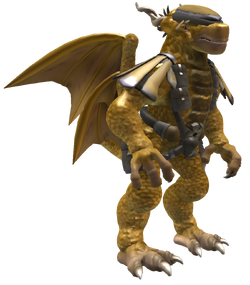 Eschewing the life of their more selfish cousins, Draosolffnoggr are nomads by nature. They trek across the Eastern Plains and between watering holes. Because there are very few places of shelter in the plains, this subgroup has developed reflective amber scales to keep them cool in the hot plains days.

They generally stay away from major settlements of other species, preferring the life of solitude in wandering families. They do not gather large hoards like other members of their species, seeing it as an example of the corruption rampant in their species. This corruption is the reason they live nomadic lives. They do not possess any form of central government and are considered more backward than other Draonoggr.

Life is hard for them however; wells dry up and their groups are under the constant threat of slavers from the Khep Dominion, who frequently target eggs and hatclings to raise in their armies and target larger members for use in blood sports. They are on neutral terms with the Merovar Dynasty in this region. The two groups often trade in case times are hard, with the Merovar accepting carved bone and trees gathered from watering holes, in exchange giving Draosolffnoggr traders food and supplies that may be low for them. 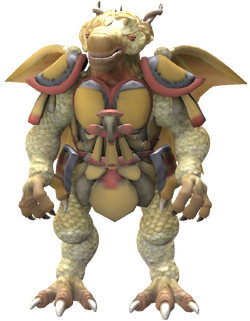 The most haughty and poorly-known of all Draonoggr. Draothumnoggr live on a collection of floating islands high above Koldenwelt. While they are supreme craftsmen with what they have, they rarely trade with 'outsiders'. Most of the time they barely leave the relative safety of their island homes. As a result, much of Koldenwelt is oblivious to their existence outside of rumours, myths or the odd vague sighting.

They consider themselves above the "ground dwelling races" and hold barely any interest in them. Their seclusion has meant they are some of the lowest populations of Draonoggr in Koldenwelt. While their enchanted crafts may be worth even more than those made by the Draokorumnoggr - often featuring exotic gems and Source-empowered metals - it is considered very unlikely that anyone would come across it.

Their haughty attitude also makes them one of the most militant groups of the species. They see anyone who does not live up to their standards as "vermin" and, given enough provocation, would be killed on sight. Luckily for most races, they never leave their islands with enough reason to warrant a continent-wide crusade. Instead of keeping other species as slaves, Draokorumnoggr animate constructs with the Source to serve as a labour force.

“They're bigger. They're stronger. BUT ONLY WE HAVE GUNS, SUCKERS!”

“Give your bones to me, dragons!”