“A life without thrills is a life without meaning. To be idle is to waste the gift given to you at birth. A Deldor must dedicate their life to fully experiencing life, for if we did not take advantage of it, why live at all?”

The Deldor are a race of bird-like creatures native of Planet Kurithora, located at the Mirianis Sector of the Borealis Galaxy's Arm of Knowledge. Known for their love for thrills which go to a biological level and their great curiosity, they are the main face of the Indoctrinate Collective in Borealis after their young empire decided to join them due to their fascination with the much older power.

A welcoming and cheerful people by nature, the Deldor are one of the youngest spacefaring races of Borealis, yet they have made themselves notable as members of the Indoctrinate Collective due to their curious culture and their love for adventures. For a Deldor, standing idle is wasting precious time, for if you are not in constant movement and constantly experiencing new things, there is no point being alive at all.

Due to their young age, the Deldor's history is limited. They achieved a spacefaring society at 2766, and spent most of their time exploring their surrounding space and making deals with other Mirianis empires such as the Elzie and the Gooplet. Once the Indoctrinate Collective began expanding to Borealis and made contact with the Deldor, the latter became fascinated with the former and pledged allegiance to the Milky Way superpower, desiring to become members of their society. Following deals with the Supreme Advisors of the Collective and the acceptance of the Deldor population, the Deldor Empire became a member of the Collective some years prior to the Second Borealis Galactic War, and their homeworld of Kurithora became the empire's new capital in the galaxy.

The Deldor are a race of humanoid birds with very colourful feathers across their entire bodies, with males sporting purple feathers while females possess pink feathers. They possess a single eyeball in the center of their foreheads which is flanked by a pair of large spiked antlers, and a pair of stinger-like spikes can be found at the end of their tails. Deldor possess large pairs of wings which allow them to fly, and they are adapted to living in frigid environments, mostly cold forests.

The Deldor are well known across the Indoctrinate Collective for their thrill-seeking behaviour which makes them stand out among the more stoic members of the empire. The Deldor evolved believing that a life without thrill and experience is not a life worth living, and therefore they are always in motion, becoming uncomfortable if left idle for long periods of time unless necessary. The Deldor are welcoming and friendly by nature and have a great curiosity, something which leads them to look out for other alien races in order to know them better.

The large wings of the Deldor allow them to fly across the sky for long periods of time. Despite the presence of the antlers, they are hollowed on the inside which makes them lighter than they look. In contrast, the antlers are not suited for combat and are instead used for display between males and females. The spiked weapon located at their tails can be used to slash or stab potential enemies, but the Deldor rarely fight in close combat, and their physical strength is considered inferior to that of a human adult. 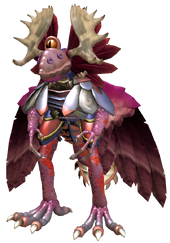 “There is much thrill in new technology.”

Kientesa Nolet is the first and current Supreme Advisor of the Deldor people in the Indoctrinate Collective. She was the chosen individual of the race to serve as their delegate in the empire's government, and has since become a solid member of the Advisor board. Under Kientesa, the Deldor people have greatly advanced in technology and have also spread to the Milky Way Galaxy, though a majority of the race still inhabits Borealis.

“I have travelled alongside both men and women of the Deldor race on various occasions, and I have never seen them tire of adventure. Mhmh, yes, almost like children.”