The Neraida, at the time known as Cyrannian Neraida, had many spies across the First Gigaquadrant, many of whom were active for thousands of years. When they heard about the creation of the Marinox by the mad scientist known as Errr, they were immediately interested in the creation of their own Marinox slaves.

The Neraida sent a delegation to meet with Errr, pretending themselves to be Grox, and eventually a decision was made to make the Cyrannian Marinox, larger and stronger than the mainstream variety. Within a few years, the Marinox were deployed in the billions by their Neraida masters, becoming the leaders of the armed forces of the Cyrannian Neraida Empire.

The Cyrannian Marinox are completely obedient to the Neraida and follow the wills of their superiors without moral question or hesitation. This makes them the perfect enforcers of the commands given to them by the Neraida. However, these changes have obviously been given in the expense of personalities, society and culture.

However, the Cyrannian Marinox are generally larger and more powerful than the mainstream Marinox and are more upright.

The Marinox stand at nearly 3.5 meters tall and have a jet black colouration, making them as much a physiological weapon than a physical weapon. Their eyes are black, deep and cold giving them a frightening look indeed. 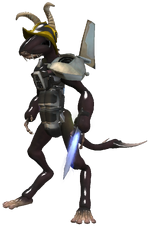 “I will have my vengeance yet.”

Khuenaten is the leader of the Cyrannian Marinox and one of the highest ranking figures of the Neraida Gigamatrix. His past is a complete mystery, but it is speculated that he has been in the Neraida's service for at least 300 years. Khuenaten is notable for having led the Neraida invasions on the United Republic of Cyrannus, the Confederacy of Allied Systems and the Cognatus Remnant during the second and third years of the Great Cyrannus War.

During the third year, in the Battle of Carindes, Khuenaten was killed in action by Zillum in one of the largest battles of the entire war. Despite being killed, Khuenaten was recreated with a new, more powerful body, and now stalks the Unknown Regions of the Cyrannus Galaxy, awaiting for a chance of revenge against the Mortalitas general. 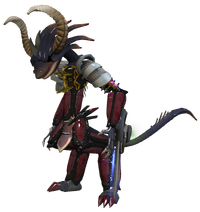 “Those who oppose Master Tyrómairon's rule will receive no mercy from me.”

Drone Meketanor KTMF7836 is a corrupted Mornûnenduran Marinox that has fallen under the influence of Tyrómairon. He was once a high ranking trooper in the Neraida, though he had significantly more independence from the other Marinox that he served with. Because of this, he had a greater degree of personality and as he matured, so did his lust for greater power. He would eventually get his wish when Tyrómairon changed and charged his entire body with Dark Mornûnenduran Energies. He became an assassin for the Mornûnendur, and a method to incite fear.

“You will be obliterated.”

“A horrible race that has arisen from the ashes again and again.”

“Compared to the ones we knew, these ones can take quite a punch.”

Retrieved from "https://spore.fandom.com/wiki/Creature:Cyrannian_Marinox?oldid=804631"
Community content is available under CC-BY-SA unless otherwise noted.