An average lifespan of 250 years

Cautious but strong and kind, as well as a strong sense for greed or protection over their wealth

The Creckels are a small, yet strong and ignorant species of swine like creatures. The Creckels have formed their own empire, known as the Creckel Kingdom wich is ruled by the Seven Creckel Lords.

The Creckels are also known for their wealth, as they are experts in mining for ore, gems and other precious metals. Some would say they have a nose for it. Yet they are very cautious of other species, and stay out of many galactic affairs- making them quite ignorant about current affairs.

The Creckel are bipedal swine like creatures, with an average size between 1.20 m and 1.67 m they are rather small. Yet their small size makes them quite strong, as they can lift triple their own weight. As well as their skin, which is quite durable against cold and warm temperatures.

The Creckel have excellent scents, and are able to smell others well beyond 3 kilometers.

The Creckel society is divided in either militairy, miners, crafters or civilians. Overall command of their navy and militairy are the seven Creckel Lords, a title inherited by bloodline. Notable fact about their kingdom is that it is devided in seven so called "realms", who all have their own space ship classes, their own customs, appearances and their own lord. Even though the Creckel are united in their Kingdom, the Creckel Lords are often in disagreement with eachother, though conflict is rather rare among the Creckel themselves. Upon their forming of the Kingdom the Creckel became sworn enemies of the Quadrantia Grox- as their borders run along theirs from north till west. They are also quite protective of their own borders, and are known to quell conflicts in the Unclaimed Territories to protect their interessts.

The Creckel believe that they are all the Sons of Creckun, the first Creckel in excistance and often make references to him when going into battle.

The Creckel Kingdom her early records date back well before 2000 BQF, where the Creckel were still inhabiting their own home planet. Around 2000 BQF, the Creckel reached space and within years they settled their own Kingdom, mining planets for ores, gems and other precious metals. Due to their protectiveness of their own borders, the Creckel became ignorant of many galactic affairs, staying out of conflicts or refusing to make probable contact with other space-faring species like the Eldarions.

Sadly the Creckel did come in contact with the Quadrantia-Grox, though they are watching their borders they stay away from it to prevent conflict. For reasons unknown, the Q-Grox do not enter Creckel borders either. Yet their isolation was not to last forever, as they made contact with their neighbours Rambo Nation after they reached space in 450 BQF. Yet first contact with the Rambo came many years later, around 227 BQF when the Noble Alliance rose to become the first major inter-quadrantia organisation. Recognising the Rambo's influance and importance to the Cluster- the Creckel allowed communications to be made and dispatched an ambassador to conduct and maintain diplomacy in peace. The Rambo offered them to join the Noble Alliance, but the Creckels refused (-a fact all seven Creckel Lords agreed with, a rarity). Due to trade contracts with the Rambo, the Creckel Kingdom and Rambo Nation began living on friendly term with eachother.

When Quadrant 82 became harassed by conflicts, like the Algernon, Diva-Bettie en Heer Stekeveel Wars- the Creckel Kingdom decided to stay out of those conflicts and remained ignorant of them. Around 16 BQF the Lizardians attacked the Kingdom during the Lizardian Threat, a prelude to the following forming of the Imperial Alliance. The Creckels manage to drive the Lizardian armada off. When in 0 BQF the Second Galactic War broke out, shortly followed by the Intergalactic War the Creckels feared for an invasion during both conflicts. As the Creckels refused to be involved, to their relieve no attack came against them.

After 0 BQF the Kingdom's wealth increased and the Creckels became even more wealthier. In 05 AQF/01 NE the Galactic Empire of Cyrannus placed Rambo Nation under their "protectrate", the Creckel Lords feared that war was inevitable with the Empire. As such, when Grand Mandator Garlboz summoned various representatives from alien empires- the Creckels accepted the summon and went to Rambo Prime. There they signed the so called Treaty of Rambo Prime wich resulted in a weapon truce and peace with the Empire. As such the Creckels were assurred the Empire would not attack them if they did not provoke them either. In 06 AQF/03 NE, the Creckels became aware of new events in the Unclaimed Territories, wich is located south to their territories when the Icolian, Jenassian and Regellis began making a presence there- events they closely monitored with great distrust. During the 4th month of 03 NE/06 AQF the Creckel Kingdom send Ambassador Ramckel to represent the Creckel during the Cyrandia Conference. The ambassador listened with caution, and came to the conclusion that trade was possible, but the way to form an alliance with the newly constructed New Cyrannian Republic was still very long. Later on the Creckel learned of the so called Draconid Act, a decision made by the Rambo Monarch, Empress Ramashe to allow the Draconid Imperium to expand their colonial presence within Quadrant 82. The Creckel were delighted by such an expansion as they saw new oppertunities for trade and commerce and a possibilty to give their own economy a boost. As such, later on in 03 NE/06 AQF Lord Creckator was present at the official opening of Lianna station where he spend a lot of time talking with Aurestor Beldrin Savenium of the Draconid Imperium, together they came to a mutual agreement to spend trade with eachother! After the meeting the Creckel dignitaries returned to their home space again.

During the first month of 07 AQF the Creckel Kingdom signed and supported the Lianna Initiative.

For unknown reasons a group of Creckel wound up at Ramalivua around 7500 BQF, founding their kingdom under the hill known as Creckabad. Under the rule of their Creckel lords, the most famous among them and the last Creckel Lord Crecktain who upon meeting with their brethern once they were space faring joined the Creckel Kingdom. The Ramaliuva Creckel prospered well until 75 BQF when the Dwulairi dragon Draconiae invaded Creckabad. With the loss of Creckabad, the Ramaliuva Creckels lost their place among the seven Creckel Lords, reducing their number to six.

With the loss of Creckabad the Creckels lost their access to the statue of Crekun and the Atlantica Artifact known as the Atlantica Tiara. 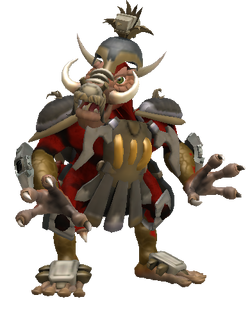 General Crexaur is the right hand of Lord Creckathor and the commander of the Creckel Guard. A proud and stubborn man, he protects his beloved Lord and planet with fierce loyalty and devotion.

General Crexaur is a long time friend and servant of Lord Creckathor his family, and as such with his militairy skills- as well as tactical skills he became the General of the Guard. 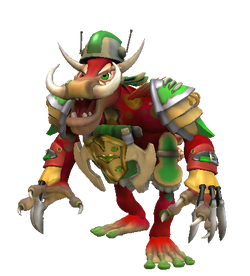 Captain Creckonius II is one of the more famous and experienced captains within the Creckel Kingdom. He is brave and noble soul, not fearing battle and willing to do whatever is needed to protect his kingdom's interessts.

Creckonius became a space captain due to his piloting and commanding style. Yet Creckonius himself rather likes to on ground missions as he dislikes staying in space for long periods of time. During his carreer he also formed his own politican opinion, and shares the opinion that it is useless and dangerous to ally with the alien empires, because he want to keep the Creckels independant.

During his carreer Creckonius fought against the Lizardians and Quadrantia Grox. He is also known to have attacked Rambo Nation vessels when they did not listen to his orders when entering the Creckel borders. Due to his battles Creckonius became a hero for the Creckel Kingdom- a position he adores. He also views other heroes of the Cluster, like Ramcard and Apollo as fellow heroes and wishes to meet with them in person once.

As of 0 BQF the most basic space ship of the Creckels who have their realm in the south of the Kingdom. This smaller, yet very agile and heavily armed vessel is a true menace for all it's enemies and is even said to be able to out run a Quadrantia Grox Sphere.

The class was introduced to replace the older Double Power Class and is cheaper and easier to construct. With new weapons, advanced shields and torpedoes the cruiser class now valiantly defends the southern borders of the Creckel Kingdom- though can also be used as a heavily armed transport ship.

The Double Power Class is the eldest class within the Kingdom, constructed to explore and colonise planets. The ship is fast and heavily armed, and it can split itself in two so it can execute surprise attacks. The ships are capable of long range missions and to participate in fleet actions. Many of these ships engaged the Lizardians and drove them off when they wanted to invade the Creckel Kingdom. The ships are fast to construct and can also be used for long range explorations but were retired in favor of other classes around 0 BQF. 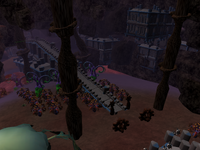 Creck-Ornost is the capital Creckel Planet of the Southern Realm- ruled by the Creckel Lord Creckathor. The planet is a purple/brown/green colored planet, with swamps, green seas and a hot climat- where as winters can be freezing cold with the entire planet being covered by snow.

Creck-Ornost ground houses precious metals, ore and a lot of differant kind of gems. As such the Creckels consider Creck-Ornost the Pearl of the South due to the wealth already digged, but even more still under ground.

Creck- Ornost houses a single fortress city, as well as various mines. The main fortress city is build above and under the ground. The underground part of the city houses the palace of the Lord of Creck-Ornost as well as various civilian houses (the more richer live underground). Creck-Ornost also houses her own militia, known as the Creckel Guard- heavily armored Creckel in bright silver armor, the armor is constructed from metals found at the planet and is said to be able to withstand incredible heats and phaser/laser bolts.

The colony was founded around 2000 BQF and is one of the first planets the Creckel colonised. During her excistence she didn't come under attack once.

The Creckel do not believe in alliance due to their wish of independance, as such they consider you friendly, neutral or an enemy of the Kingdom.

“We can live and trade with them!”

“Stay on their good say, and you can profit from them”

Community content is available under CC-BY-SA unless otherwise noted.
... more about "Creckel"
RDF feed
Creator
Dinoman82 +
Diet
Herbivore +
Downloadable
yes +
Environment
Ennvironments with oxygen in the air and planets holdings mining capabilities like ores and gems +
Image
Creckel.png +
Lifespan
An average lifespan of 250 years +
Locomotion
2 Legs, Bipedal +
Personality
Cautious but strong and kind, as well as a strong sense for greed or protection over their wealth +
Size
Between 1.20 meters and 1.67 meters +
Advertisement