The Crakadox, formerly known as the "unidentified crab-like species" is an ancient race hailing from the Quadrant Galaxies, being notorious for their conflict against the Atlantica in ancient times. Once amongst the most advanced civilizations, their once proud empire ceased to excist around 15.000 BQF, shortly after their war with the Atlantica.

The Crakadox are bipedal crab-like species, with on their left arm one massive claw. Able to breath underwater as well as on land, make these species a formidable and strong foe. Their claw is able to destroy metal, crushing bones and even acts as a shield against bullets and blasters.

The Crakadox are large, measering easily over two and a half meter, these slow moving but incredible strong and endurable make them a difficult foe to defeat, as it takes a lot to take one down. Their have a natural emplified biological blood, able to heal dire wounds without medical aid, though is often requieres the Crakadox to go into a dorment state. When armored, the Crakadox face is hidden, their armor include shoulder pads, leg armor and a blaster at their other arm.

Coming into existence shortly after the Atlantica roamed the Quadrant Galaxies, the Crakadox were created in vision by the Atlantica Corpler and were one of the earliest sentien lives within the five Quadrant Galaxies. Thriving, their empire rose amongst the most powerful in Quadrant 82 in rather isolation. Around 22.500 BQF, the Crakadox encountered the Aininyë and disagreed with their policies and visions on how to rule the Quadrant Galaxies, as the Crakadox believed that all live should be living without intervention by outsiders. Though their first contact was promising, the Atlantica sphere of influance frightened the Crakadox who began using ancient and left behind Atlantica technology against the Aininyë. the war was devastating, destroying both empires the war lasted until 15.000 BQF when both forces suddenly ceased to excist, leaving just remnants behind.

One Crakadox was found at Lesrekta by Rambo Nation around 448 BQF/447 BQF, hidden and remaining in frozen carbonite hibernation as the bastion of Barâd-Nâzg. Scientist discovered at Lesrekta that the Crakadox has dealings in the past with the Atlantica, the Oikoumene and the Yodian, though much remains a mystery to them.

Remains of their once proud civilization include a snow burried temple at Aegimi, a space port at Umbrax and the Lesrekta bastion. 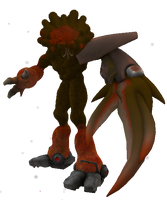