“A Corthrinus is not a servant. Not a slave. We are masters. Masters of our own destiny. We do not bend, and we will not break.”

The Corthrinus are a species of carcharodontosaurid saurian native to the Outer Rim world of Rinus, noted for their mastery over the Great Corthrinusi Empire, one of the major powers of Cyrannus prior to the formation of the Empire. A race bound by strict tenets of honour and nobility, the Corthrinus are also characterised by their nature as conquerors, using their military might to enforce their will on lesser species. However, despite their history of aggressive expansionism, the Corthrinus are generally well-regarded by the galactic community, and while they retained their independence prior to the rise of the Empire, never once sent fleets against the civilisations of the galactic interior, upholding stability with an almost spiritual fervor.

Commanding an empire on the fringes of the Unknown Regions, the history of the Corthrinus was often shaped by attacks by the vicious Neraida, which hounded their borders for centuries. Similarly, they fought back many a crusade by the First Cognatus Empire, and subsequently allied with the United Republic of Cyrannus against them during the Intergalactic War. Following the conflict, they remained neutral, albeit in favour of the Republic, during the galaxy-spanning Great Cyrannus War, and joined the pangalactic Empire following the war's resolution. Under the Empire, the Corthrinus have prospered under the leadership of their former Emperor, Savra Mathen, though by the outbreak of the Second Great Cyrannus War, many of Rinusi kin began conspiring toward the overthrow of the Empire and the restoration of their sovereignty.

The Corthrinus achieved spacefaring capabilities circa 7,400 BNE, in the aftermath of a devastating war of unification fought on their homeworld of Rinus. Establishing the Great Corthrinusi Empire, the people of Rinus began exploring the stars, establishing new colonies and establishing trade routes with species across the northern sectors of the Outer Rim. Though initially a peaceful race, unwilling to engage in warfare against more advanced alien species, under the leadership of the King of Thorns, a fearsome Corthrinusi emperor, the Great Empire of Rinus subjugated eleven systems in a single year, forcing many alien leaders to bend the knee. Few races possessed the power to fight against the new empire, and while the King of Thorns eventually died, his legacy lived on in a strong and stable empire, one which treated its subjects fairly. In 3,480 BNE, a Corthrinusi exploration fleet, exploring the unknown stars beyond their territory happened upon a Neraida cube, which ruthlessly attacked the Corthrinusi fleet. Thus began the War of Many Cycles between the Corthrinus and the Neraida, with neither side coming to a definitive victory, due to the relative distances between their core territories.

As a result of the conflict, the Corthrinus military became increasingly dictatorial, under the rule of the noble House Mathen. While the conflict eventually came to an end, skirmishes between the two factions continued into modern times. However, as the Corthrinus expanded into one of the galaxy's most feared civilisations, they began making contact with the species of the galactic interior, striking up a cooperative relationship with the Federation of United Worlds and the Basileus Imperium. Centuries after the War of Many Cycles, a Neraida Cube attacked the Royal Shuttle of Emperor Savra Mathen, eleventh of his name, resulting in the newly crowned Savra XII assuming the Rinusi Throne. Savra made a point of extending olive branches to other species in Cyrannus, resulting in a rebel faction breaking off from the empire and begin deadly raids on the Core. During one such raid, the Corthrinusi attacked the peaceful Navajaó, almost exterminating them before the United Republic of Cyrannus intervened, driving them away and forcing the Rinusi government to issue a formal apology to the survivors.

During the Intergalactic War, a Corthrinusi fleet made contact with the main Cognatus invasion force, preparing for their invasion into the Core Worlds. Following a small Cognatus fleet, they found themselves in the centre of a battle between the Cognatus and the Republic, and immediately began aiding the URC against the zealots, whom they believed were a threat to the secular stability of the galaxy. Their intervention won the respect of the Republic's leaders, though the Corthrinusi ultimately remained uninvolved in the conflict, as well as the subsequent Great Cyrannus War, though their stance was staunchly anti-Confederacy. The Corthrinus were soon confronted by a powerbroker known as Tyrómairon, who managed to convince Savra to join his New Order, taking root at the heart of the Republic. When Tyrómairon declared the end of the war and the rise of the Galactic Empire of Cyrannus, the Corthrinus subsequently joined, partially out of fear of an overwhelming Imperial reprisal.

After the rise of the Empire, the Corthrinus became bitter rivals of the Mortalitas, after their Queen, Moch-Na, announced that she was pursuing the title of Grand Mandator of the Unknown Regions, a position which now-Mandator Savra coveted. After a meeting of the Mandators on Orbispira, Savra warned Moch-Na that if she wished to claim the position, she would have to fight for it, and prepared his fleets to engage those of Moreuse. Both species came close to war, were it not for the intervention of the Saurornithanta, whose leader, Bri'sa'tana, was appointed to the position of Grand Mandator. Over the next several years, Savra and the Corthrinus attempted to secure greater political power of their rivals, establishing a trade partnership and personal political alliance with Empress Ramashe of Rambo Nation.

After the dissolution of the Imperial Senate in 14 NE, Savra was promoted to the new position of Grand Mandator of the Corthrinus Space Oversector. However, Savra, embodying the attitude of much of his people, had become largely disillusioned by the Empire, longing for their independence. Indeed, during the first battles of the Second Great Cyrannus War, Savra refused to aid in the defence of an Imperial convoy in the nearby Corthon system—an incident greatly of interest to the New Republic.

A feared, militaristic and occasionally brutal species, in many corners of the galaxy, the very name "Corthrinus" is enough to evoke dread, for their relentless quest for power has left many worlds ravaged by the storm that is their armada. However, the Corthrinus are ultimately a fair and straightforward people, for they tend to lack the duplicitous ways of their Basileus cousins. Indeed, while the two species share much in common, the Corthrinus use brute force to smash their foes, rather than politics and intrigue as do the children of Vasuband. According to the masters of the Aldárae Order, the ancient scribes of the Oikoumene describe Twelve Tribes of Capricyránae, of which the Corthrinus are the Ninth. While their connection to the other species of the Capricyránae is disputed by most evolutionary scientists, citing the lack of a common ancestor, it is believed that the connection functions more as a mantle of kinship, or an indicator of favour by the ancient Thirteenth Tribe of Oikoumene.

Physically, the Corthrinus are carcharodontosaurids, characterised by the pair of rounded crests atop their skulls, consisting of extensions of the nasal and lacrimal bones. These crests are used entirely for display, with large crests being considered attractive in a potential mate. However, unlike most species of Capricyránae, Corthrinus display little in the way of sexual dimorphism, at least in terms of skeletal anatomy. Nevertheless, females, on average, tend to be slightly larger than males, and have tended toward dominant positions in ancient Corthrinusi society. In modern times however, little in the way of discrimination exists in Corthrinusi society, though non-saurian races are often looked down upon, particularly mammals and, due to their history with the Neraida, species which experiment with cybernetic implants.

Odonn-class shuttlecraft
A spacious and luxurious Corthrinus vessel, the Odonn-class is among the most common vessels produced by the Corthrinus, often used by heads of planets and members of the Corthrinus Imperial Government. After the Corthrinus joined the Galactic Empire of Cyrannus, many government officials, such as Senator Guolivian acquired a shuttle, making them rather prestigious among the upper echelons of galactic society. Many of these vessels can even be modified to fit warlike roles, foregoing their peaceful design. 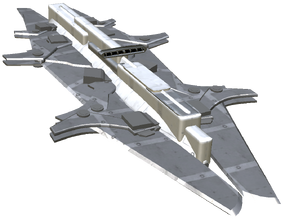 Savra-class battlecruiser
A massive 2,600 meter long warship used by the Corthrinus since their early days, the Corthrinus Cruiser is the epitome of modern starship designs, having a sleek hull and weapon systems that rank among the highest in the entire Empire. Such weapons include an inbuilt superlaser below the ship's bridge, which can quickly annihilate an enemy ship, or even a planet's surface. After the formation of the Empire, the Corthrinus secretly continued spreading fear across the Unknown Regions by use of these vessels, something the Imperial Government is showing a blind eye to. 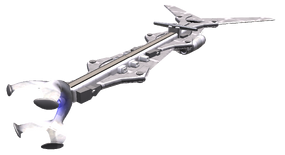 Bastion-class Dreadnought
The Corthrinus Royal Bastion is a 10,000 meter long warship used by the Emperor of the Corthrinus. Only one of these vessels exist, the Hand of Rinus, which serves as Savra Mathen's royal flagship, often serving as his flagship when he marches alongside his subjects into battle. The Hand of Rinus has the distinction of being the only single ship to destroy fifteen Grox Cubes in a single battle, though the Hand was severely damaged in the encounter. Nevertheless, it was repaired and is now considered one of the most feared ships in Cyrannus.

“A strong empire, whose power spreads fear across the galaxy like a wildfire.”

“They ain't half-bad. Maybe I can spare them.”

“We have unfinished business.”

“Someone needs a chill pill.”

“That Asgord head is for a science experiment, right?”

“We could get along with this race.”

- Emperor Aoblix of the ULE.

Retrieved from "https://spore.fandom.com/wiki/Creature:Corthrinus?oldid=768966"
Community content is available under CC-BY-SA unless otherwise noted.