Carbon based in physical form

They see themselves as controllers of the Milky Way, worker caste can be polite if one speaks when spoken to near one.

“They lurk in the shadows and prey from within.”

Although both long ago transcended (technologically) their physical forms they watched Earth for millennia until Humanity began to evolve. For reasons unknown, the Alpha Draconians banned the Terran Draconians from Earth until recently.

The original Alpha Draconians are believed to have been engineered by the Oikoumene to serve as their representatives in the Milky Way Galaxy. For thousands of years, these reptilian highlords ruled with an iron fist over the Milky Way, but over time they began to fade into the shadows, manipulating events and civilisations from afar. Approximately sixty five million years before the rise of The Civilisation, the Alpha Draconians discovered Earth, where they became very interested in the saurian natives of the planet.

It is believed that the Alpha Draconians saw something of themselves in the dinosaurs of Earth and soon began to provolve a single species, which became known as the Terran Draconians. After many years of enslavement, the Terran Draconians revolted against their masters, though their rebellion was soon crushed when the Alphas wiped out most of the life on the planet in what soon became known as the K-Pg Extinction Event.

However, the resilience and survivability of the Terran Draconians impressed the Alphas, who allowed a select few to survive to function as their slaves. Over time, the Draconians left Earth, though the Terrans pledged to return and wipe out what they saw as the mammalian infestation.

In the intervening millions of years, the Draconians ascended to a new plane of existence, while maintaining their physical forms when they choose.

During the nineteenth century of Earth, the Draconians returned to the planet and began to secretly manipulate the global Human presence. The Dracos seeded the powerful human bloodlines with their genes, some of which became the source of conspiracies and abduction cases in the 20th and 21st centuries.

By the 27th century Earth was left mostly uninhabited and the Alpha Draconians began to seek to control Earth once more, as it contains a powerful mana energy source for their plane of existence, while the Terran Draconians sought to rid the planet of its human inhabitants. The Dracos returned and infiltrated the government and militaries of the Human Intergalactic Republic during the so-called Rights of Earth.

The Terran Draconians are more passionate about maintaining a military-centric society and value their perceived superiority over lesser mammalian species than the Alpha Draconians, although their society has other casts. The Chitauri are envious of Earth and want to restore it to their control.

The Terran Draconians are capable of being polite, only if those they deem inferior never speak first.

Both Draconian species live in an unknown realm, but when interacting with who they deem inferior, the Chitauri are typically shorter than the Alpha Draconians. They are however physically impressive, standing seven to nine feet tall, some with broad physiques and some with a more slender, snake-like appearance.

Draconian technology has been rarely observed. Certain groups of Greys were subservient to the Chitauri, and both Draconian races could be seen inside Grey ships. 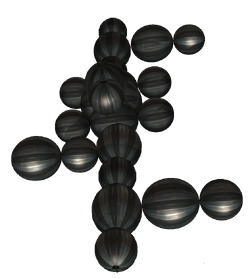 The primary mode of transportation and warfare for the Draconians.

“Plazith will prosper under their control.”

Community content is available under CC-BY-SA unless otherwise noted.
... more about "Chitauri"
RDF feed
Creator
Cyrannian, Wormulon, Monet47 +
Diet
Omnivore +
Downloadable
yes +
Image
ChitauriNew1.png +
Lifespan
Unknown +
Locomotion
Bipedal movement, teleportation +
Personality
They see themselves as controllers of the Milky Way, worker caste can be polite if one speaks when spoken to near one. +
Size
7-8 feet, possibly more. Can shapeshift. +
Advertisement