The Chinawkya are blue skinned humanoids native to the Quadrant Galaxies. Though resembling humans, they instead are descendants of the ancient and mystical Aininyë. After signing the Treaty of Fornaeria in 03 AQF, the Chinawkya became an influential, trusted and well respected race within Rambo Nation.

The Chinawkya are blue colored skinned humanoids. They originated from the eastern sectors of Quadrant 82. With their blue appearance their capital planet, Ivalaë soon rose out to one of the more dominent planets in the eastern sector of Quadrant 82. Though the Chinawkya can be compared to the humans, they are actually more resistent to extreme colds, and do not need extra cloathing on icey planets. Some of them are also capable of using magics, which is seen as the legacy of the Atlantica to the Chinawkya. Most of the Chinawkya have a slender appearance, which is considered as lovely by other races in the Quadrant Galaxies.

The Chinawkya are friendly and gentle by nature, with a love for culture, clothing, honor and art. Many of the Chinawkya serve within Rambo Command and explore the stars in name of Rambo Nation.

The history of the Chinawkya is filled with peace, and within years after launching their first spaceship; they founded their own empire, known to others as the Chinwakya Republic, which was ruled by an elected Chairman. However the Chinawkya were far from unified, their differant colonies in constant disputes about income, economy or trade they did manage to build one of the more bigger and most powerful ships ever seen in the Quadrant Galaxies at the height of their time, only rivaled by four others (Rambo, Imperials, Xiaan and Atlantica themselves).

When in 03 AQF the Rambo were victorious in the Fornaeria campaign- the Rambo allowed other races to join them, which was a wish of the Chinawkya for years. The Treaty of Fornaeria was signed by many, including the Chinawkya and they became full members of Rambo Nation, soon rising as one of the more prominent races of the Nation, together with the Serindia, Kloppig and Amiaeria. Upon their joining they were given their own sector, which was represented by the young but promising Senator Chuinaylia.

When in 05 AQF the Nation was froced to sign the Nim-Glaré Concordat, placing the Nation under the "protectrate" of the Galactic Empire of Cyrannus, many Chinawkya grew anger with the Cyrannian who they once trusted. 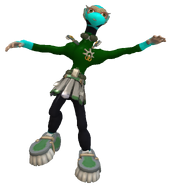 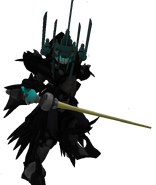