Between 1.85 and 2.6 meters when reaching adultry

Friendly, but agressive and frustrated when thing do not go as they want

The Chavelli are bipedal humanoid looking creatures with long arms and fingers. There head/brains are enlarged, giving them a mysterious look and telekinetic abilities, like mind reading, able to levitate objects and persons. Yet the Chavelli are friendly by nature, strong but can also be short tempered when things are not going as they want. The Chavelli are dangerous to all they consider enemies, yet friendly to their allies. They do not worship the Atlantica as much compared to the others species found in the Quadrants.

Ordinary Chavelli do not wear cloathes, attributes like hats and cloathing are only reserved for those in special functions, like goverment officials, scientist, medical personnel, Scion summoners. However, the Chavelli that began living within the New Cyrannian Republic shed loose these ancient traditions to better blend in within the Republic.

Not much is known about the history of the mysterious Chavelli, they made their first appearance in 0 AQF; during the Intergalactic War when they became members of the Cognatus Remnant and Valchi became their main diplomat. With their abilities they soon became shipbuilders and manufractures of weapons of the Remnant. Having lived in isolation and sollitude for years they became interessted in the events fo the Cyrandia Cluster and their ongoing conflicts. When the Remnant was reformed into the Cognatus Empire in 01 NE/05 AQF many of the Chavelli felt the urge to leave them at whole and become independant again. Silently the Chavelli withdrew from the Cognatus and began living in isolation again.

Surprising, some of their species found a new home within the New Cyrannian Republic, wearing cloathes again to better blend in within the New Republic, the Chavelli who left to live under the Republic were ousted and not welcome any more at their homeplanet.

During the first month of 07 AQF, a mysterious green nebula appeared out of nowhere in the unclaimed territories, fearing an extra-dimensional invasion the Chavelli began researching the anomaly. Sadly at the same moment the USS Enterprise-A arrived at Chavelli for diplomatic negotiations. Not having the time, the Chavelli goverment dispatched Valchi to deal with them and inform them that they were currently occupied. Since the event the Chavelli began constructing their own kind of cruiser that resembles those used by the Cognatus of old.

Reemuckeeus, commander onboard the Republica 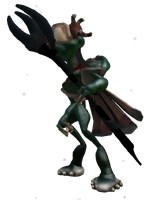 Planet Chavelli is the purple homeplanet of the mysterious Chavelli, located deep in the Unclaimed Territories of Quadrant 82, the planet is often avoided by many. The Chavelli themselves are capable shipbuilders, a trait used by the Cognatus Remnant before it's dissolution. The Chavelli live in large cities, nearby water and mountains they build towering buildings representing their spirital believes and honoration to their advancement. The large cities are often crowded by the Chavelli, where they work, live, study the stars and live their daily lives. The many bridges connect one district with anohter, with in the center a large spiral tower that can overlook all districts. After the dissolution of the Cognatus Remnant, the Chavelli began using their older battleships for their own, marking their newfound fleet as one of the stronger fleets within the Quadrants.

The two scions that inhabit Chavelli are both psychic Scions, both are loved and respected deeply by the Chavelli. 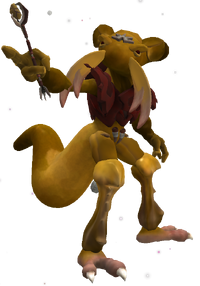 Abrazulam is a mysterious Scion, with strong psychic abilities it is a dangerous scion to have against you. His psychic abilities range from confusing it's opponents or using telekinesis to harm it's victims. It is also known that the creature has a limited ability to read the minds of others.

Their small staff allows them to use their psychic abilities with a dangerous precision, though when without the Abrazulam can panick and often do not know what to do anymore, if worse cases the psychic powers can back fire upon the Abrazulam and hurt the creature. Not commonly found within the Quadrant Galaxies, the creatures are native to the Chavelli homeworld where they often hide in dark corners of the massive cities of the Chavelli.

The Veseva are kind and cute creatures, often seen as cats they have the same traits, purring when they are happy and hissing when in danger. The Veseva are purple colored creatures, with a very soft fur the Veseva often enjoy sleeping and are quite lazy, seeing others as their servants when they make sounds for food or the cleaning of their furr. The Veseva as such can be considered a bit arrogant as well.

Veseva have the ability to use telekinetic abilities, able to confuse their opponents and levitate objects. Veseva are only found at the Chavelli homeworld, though the Chavelli are aware they are Scions, none in their history managed to tame one. Though friendly in the wild, and often going to the Chavelli, they refuse to be used as Scions by them.

The Chavelli either consider you friendly or unfriendly.

“Heretics and not worthy!”

Community content is available under CC-BY-SA unless otherwise noted.
... more about "Chavelli"
RDF feed
Creator
Dinoman82 +
Diet
On +
Downloadable
yes +
Image
CRE Chavelli-0c4925b8 ful.png +
Lifespan
Around 350 years +
Locomotion
Bipedal, sometimes floating due to telekinetic abilities +
Personality
Friendly, but agressive and frustrated when thing do not go as they want +
Size
Between 1.85 and 2.6 meters when reaching adultry +
Advertisement