The Borealis Caretakers are a race of creatures who look after the artifacts of the Kormacvar in the Borealis Galaxy. They are responsible for maintaining the Borealis Grid, repairing any damaged Kormacvar artifacts, and defending the galaxy. The Caretakers have no personality, and don't show any threat to anyone. They are led by The Mechanic.

The Caretakers were creatures created by the Kormacvar in order to look after their equipment and to aid their sibling species, the Alvino. Originally planned as robots, it was decided that a race of biological creatures who thought and acted in a certain way would be more efficient, as they exceeded the technical limitations. The Caretakers were eventually made as a cyborg race, who were originally slaves, but soon became formal workers for the Kormacvar.

Caretakers, on outside appearance, have a radial mouth surronded by large bony spikes, and a pair of long arms. Caretakers are cyborgs, having many cybernetic attachments and are thought by some to have cybernetic muscles. It is known, however, that they have cybernetic tentacles which they can control with their nerves.

Caretakers generally have little personality and are a group mind. Almost like robots, they will perform the tasks they were literally programmed to do. Caretakers are often found fixing parts of the Cold Ones technology when damaged, maintaining it, and expanding upon it. Why they do this is a mystery that no one in Borealis has ever been able to solve. it is known, however, that they once repaired an enormous Kormacvar spacestation formerly in debris within just a few hours.

Caretakers have mind links with each other, and use the same Psionic Energy that the Krassio use, as well as some Chronoscopic powers. In this way, they are comparable to Ioketa, though they are only half as powerful. Having these powers, they are capable of telekinesis, allowing their tasks to be completed more easily, as well as being able to warp time (to a small extent) to fix or build things faster.

It is unknown where Caretakers live. Many old legends state that the Caretakers never have to sleep, eat or do anything that normal mortals do. Others say that their homes are the very Kormacvar technology that they fix and maintain. There are some legends that say they live in the very subspace that the Borealis Grid exists in.

Caretakers have been known to use 'pods' to travel around the galaxy in, as well as spiderlike robots that they drive to repair things. Besides this, Caretakers use the same vehicles the Kormacvar once used.

Caretakers use the same technology that the Kormacvar once used, althugh aside form this, their devices come only in the forms of their cybernetic implants.

Caretakers each use portable turbolaser blasters as self defence weaponry, as well as their cybernetic tentacles, and occasionally their Psionic powers. 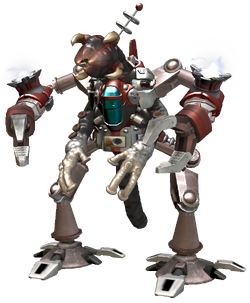 The Mechanic, also known as Head Caretaker, is the leader of the Borealis Caretakers. The most powerful of them all, the Mechanic is an old, wise Caretaker with the most notable personality of them all. The Mechanics' power is unknown to most, as is his history, though it is theorized he was the first ever successful Caretaker.

The Mechanic is a typical old, grumpy man who always sees everyone else as a 'youngster'. He's a typical bossy character, wanting everything done his way, who always orders the other Caretakers around in such a fashion. However, he is also wise, sympathetic, and light-headed, more often than not chilled and looking for the best solution to a problem rather than panicking. 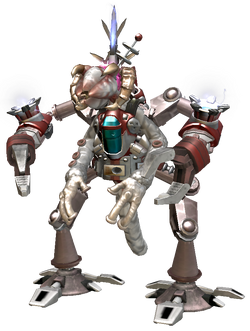 “Can't get housework done without a good Mother around here.”

The Mother is one of the oldest of all Caretakers, being as ancient as the Mechanic and the Kormacvar Empire. Most of her past is unknown due to Regnatus' erasing of the Kormacvar's databanks, but she's speculated to have been the progenitor of the first Caretakers after they evolved from the Naombur.

With a posh personality and an air of superiority, the Mother is much less known than the Mechanic, but is still a very important Caretaker regardless, taking his place as the internal leader of the species after his merging with the Grid. 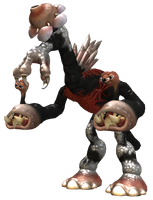 First model of the Caretaker