The Brezare are a species of reptilian creatures native of Brezariano, a planet at the Core Worlds of the Cyrannus Galaxy. A race who greatly values commerce and trade, their early years were marked with affiliation with space pirates, though they were eventually persuaded to follow more pacifistic traditions following contact with the Federation of United Worlds. In the present day, they are members of the New Cyrannian Republic.

The Brezare hail from the swamps of Brezariano, a planet at the Core Worlds of Cyrannus. Achieving spacefaring technology at 430 BNE, their original empire was greedy and sought to expand its borders and riches through violence. However, conflicts with the Libertus led the Brezare to be pushed back to their homeworld and accept surrender, though diplomats of the Federation of United Worlds persuaded their people to start anew. Those who did not accept this peaceful outlook fled the empire and became space pirates, with many of them pledging themselves to the Cyrannian Syndicate.

The Brezare would become official members of the United Republic of Cyrannus when it was formed, led by the senator named Zacoleths who pledged his people's support in the war against the Confederacy of Allied Systems during the Great Cyrannus War. When the Republic was reformed into the Galactic Empire of Cyrannus, many Brezare made their disapproval public, including Senator Zacoleths who was ultimately executed for treason once discovered supporting dissidents who wished the flee the Empire. With the formation of the New Cyrannian Republic, many Brezare took the opportunity given by the political turmoil to immigrate to it, while the part of their race indifferent to the life in the Empire remained in it. With their people spread across Cyrannus - though the majority belong to the Republic - the united empire of the Brezare no longer exists.

Following the end of the Second Great Cyrannus War, the Brezare have all pledged their allegiance to the Republic once their worlds were liberated, and now live under it as loyal members.

Brezare are reptilian creatures standing at the average size of a human adult. They are distinguishable by their very thick green scales, adapted to survive battles against the predators of Brezariano, by the antlers on their heads and by the pair of large, frilled limbs which grow on their backs which serve as temperature regulators. Brezare are a physically capable species with large, curved claws which they use to clobber their enemies with when clenched. Females can be distinguished from males by their larger size and much longer frills.

A species revolved around profit, the Brezare are conditioned to always look for means to increase their wealth. Their species is known to physically feel pleasure at the presence of certain kinds of ores and metals - including those widely seen as valuable by all races, as well as others which some would consider worthless - meaning amassing wealth is a very heavy part of their behavior. During their early years, they were an expansionist and aggressive people who were largely uninterested in the opinions of their alien neighbours, but time has turned them diplomatic and preferring to negotiate rather than resort to violence.

“An interesting race, they are. Especially their biological desire for precious gems. Though I am amused by how much a race like this places values in something as trivial as copper.”

“Those lumpy arms on their backs disgust and revolt me.” 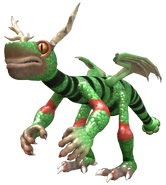 First model of the Brezare