“Our blood may be cold, but our hearts burn with unseen ferocity. Like the Winter, you cannot be rid of us; you may burn our lands to the ground and salt the ruins, but like Winter, we will always come again. And like Winter, if you are unprepared for us, then it is likely that your death will be a chilling one.”

The Borealis Zazane, also known as Detharango (Zan'Tai: Icebound Ones) are a subspecies of Zazane that evolved in the Borealis Galaxy.

Roughly 70,000 years in the past, the Zazane of the Second Sovereign Domain entered this universe to study it. A moderately large Zazane fleet was sent to scout the Gigaquadrant to see if it was inhabitable for them or not, and eventually entered the Borealis Galaxy, deciding to settle on it. As time passed, these Zazane become comfortable with the galaxy's Cold Relay system, which made interstellar travel much easier than with their old technologies. This, however, made these Zazane sedentary and no longer worried about their original mission, which was eventually disregarded and completely forgotten. Eventually, their supplies became scarce, and these Zazane became desperate for resources, turning themselves to piracy and looting nearby empires to survive, eventually growing used to this lifestyle and choosing to adopt it as their standard. The many years of using the Cold Relays also made their bodies mutate each generation, until they became the Borealis Zazane known today.

Like their Drik kin, the Borealis Zazane are tall, synapsid creatures with a draconian build. Their scales are tinted blue with black around the area of their limbs and tail. Their skeletal structure is enveloped in a layer of Shidium which extends to their nails, claws, horns and head crests, making them incredibly resistant against blunt damage. Like their original kin, the Borealis Zazane have a constant supply of stem cells for accelerated regeneration, a second heart to pump blood faster and a crevice at the back of their throat which allows them to spit their toxic, mud-like, Shidium-infused blood at foes. They also have Shidium-made crystaline structures erupting out of their chests which acts as natural armor. One notable different between the Borealis and Drik Zazane is that Borealis Zazane females possess three pairs of horns as opposed to only one. Like most Zazane subspecies, they possess a pair of wings, but cannot fly with them.

Borealis Zazane have evolved a culture centered around piracy, meaning they take joy in theft and breaking laws. Often rogues, bounty hunters or assassins, they are aggressive creatures who, unlike their Drik kin, have no code of honour. This has changed since Kryptkor Talsar became their leader, though, as he began teaching the species the benefits of a lawful society. The Borealis Zazane are divided between those who wish for order and those who only want chaos, but overall, the species is still stereotyped as being uncontrolled, brutish criminals in Borealis. Despite this, the Borealis Zazane are actually a deeply spiritual people with a religion centered around Vaxal Myraad, who according to them, is responsible for their evolution into what they are now.

Having no physical differences from the Drik Zazane, the Borealis Zazane are among the strongest species in the First Gigaquadrant. Extremely powerful and tough, they are one of most physically superior races of the Borealis Galaxy, losing only to the Cold Loron and the Zí-Jittorám. Borealis Zazane have a natural resistance to cold temperatures which allows them to remain comfortable even at under -100ºC, though this has the consequence of them not being as agile as other Zazane subspecies. The crystalline formations on their chests, as mentioned previously, act as natural armor in addition to their already impressive Shidium skeleton. All Borealis Zazane have the potential of using Descension Energy, though reports of individuals actually using the Essence have not been heard of in several thousand years. 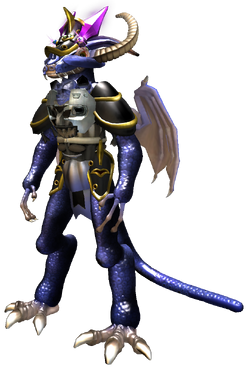 Kryptkor Talsar was the founder and pnly leader of the Borealia Kingdom. Being convinced by Crispy's Insurrection that the Brood of War was an oppressor empire, he created the Kingdom to house his people and free them from the likes of Tyraz Breek and General Volim.

A former space pirate, Kryptkor reformed into a far more lawful individual, leading his men into battle with great bravery and power. While initially not actively hostile toward the Brood, Kryptkor was merely waiting for an excuse to open war on them, which eventually led to his death by Tyraz Breek's hands. 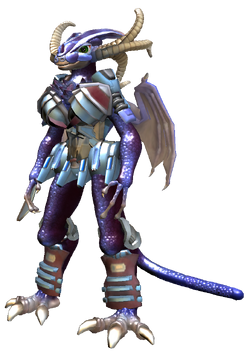 “I will kill all of you pigs.”

"Dolgan Tuchaki", real name Tulsarshima Talsar is a Borealis Zazane and a former member of Dark Grip, the special ops unit of the New Wranploer Legion, who joined Vekaron's team after a series of events which made her change sides, mainly thanks to Kalcedia's efforts. She was given the opportunity to be pardoned of her crimes and no longer be sent to Exile Station by serving under Vekaron's leadership, something she has grown to enjoy.

Because of her traumatic early life, Dolgan grew into a misanthrope who held a grudge toward all individuals as well as a great fear toward the concept of sexual intercourse. After she became a member of Vekaron's crew, Dolgan has managed to open herself a little, though she still shows immense difficulty in interacting with people without feeling hatred for them. Her misanthropy has been replaced with a hateful attitude toward those she considers enemies, and she will do what she can to protect those who accept her not as a toy or weapon, but as a person. 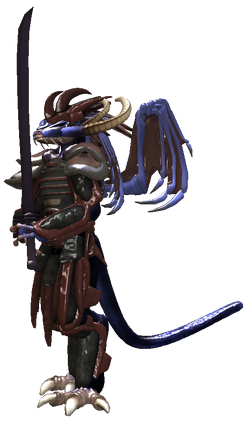 “The blood of sinners runs free.”

Khortaavis Chisalka is a Borealis Zazane warrior who owns the title of Archblade in the Merchant Fleets, wielding the famed cursed blade known as Sin's Edge. Among the strongest Borealis Zazane of modernity, he is an individual who thrives for order, discipline and patience, serving as an advisor and as guidance for the Fleets' higher ranking members as well as a potential master for any students who may have interest in training under him.

Khortaavis wields his blade with unmatched efficiency, having such a strong will that the demonic weapon came to obey him rather than attempt to take him over, though he has been affected by its energies nonetheless as shown by his rather damaged appearance. This, however, does not stop the warrior in his tracks, and he is to this day widely respected across the Merchant Fleets and the whole Polar Crystal Alliance for his adamant willpower and leadership skills. 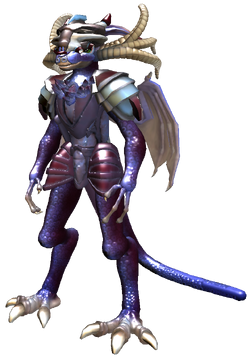 Khaya Chisalka is a Borealis Zazane hailing from the Merchant Fleets who was added to Tetra's team for the purpose of ensuring his crew's security. She has the rank of Noble Enforcer within the Corps itself, a position of power which means she has extensive battle experience. With an extremely polite attitude marked by her few words, Khaya is a powerful warrior who makes use of a Zazane katana to cut down all enemies who may dare bring harm to Tetra or her fellow squadmates. However, underneath this cold exterior is a much warmer and gentle woman, something Tetra and his team are not yet fully aware of. 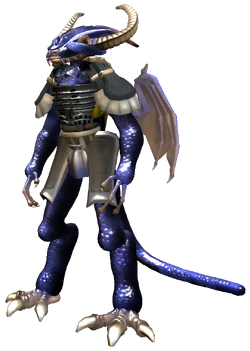 “The Alliance was founded on the properties of order and law; the opposition of chaos. I and all of my brothers embody such ideals, ideals that will keep the Alliance standing and the irritating scum out of its borders.”

Mordaruul Irkhariin is the diplomat representing the Merchant Fleets in the Polar Crystal Alliance. A veteran soldier and a highly-renowned public figure among the government of the Fleets, Mordaruul was appointed as a representative due to having undergone retirement from frontline service and desiring to remain useful to his people and others. An inquisitive yet stern figure, difficult to stagger both physically and psychologically, Mordaruul keeps keen eyes on the other representatives as well as various public figures within the PCA, always engaging with an eager hunt for potential dissidents and crime throughout Hyperborea's many industrial and residential centers; he would gladly exact the Fleets's analogue of justice to any of the other representatives should his suspicions regarding them be confirmed.

“Treachous fools! After all I have done to you!”

“Our Borealis kin have betrayed us. Their crime is unforgiveable.”

First model of the Borealis Zazane